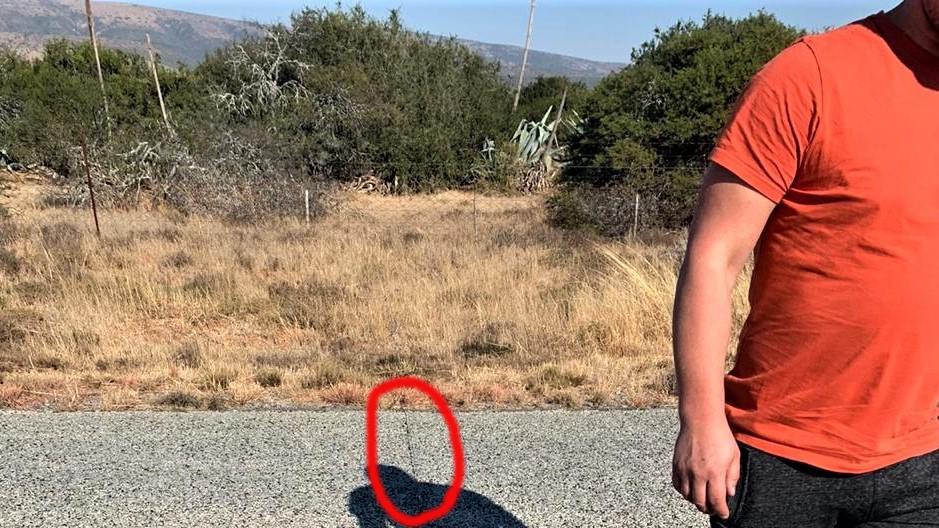 Barbed wire laid across the road (circled in red) in an isolated area on the way to Carlisle Bridge may have been intended to cause punctures. Photo supplied

Construction company owner Matthys Bosch, who lives on a farm in the area, said he was driving towards Bedford around 9am on Monday 20 July, when the strand caught his eye.

It was a single strand and Bosch suspects the barbed wire was intended to puncture a vehicle’s tyres – probably a bicycle’s. The road is a favourite route for road cyclists, who frequently cycle out to Carlisle Bridge and further on training rides.

“It was tensioned flat against the tar, so it doesn’t seem like it was intended to injure a person, but it could have punctured a tyre,” Bosch said.

It had been tied to thorn bushes on either side off the road.

The wire “trap” was set up around 35km from Makhanda, close to the Dikkopvlakte farm turnoff and 3.5km before the second Riebeeck East turnoff. Here is the location: https://goo.gl/maps/2gfoSuT34FNk6AXt5

Bosch said farmers in the area were looking into the incident.

South African Police spokesperson Captain Khaya Tonjeni said, “The police have not received  any official report on such activities but would like to warn motorists to be aware of such, warn each other and report any criminal activities to police immediately.”