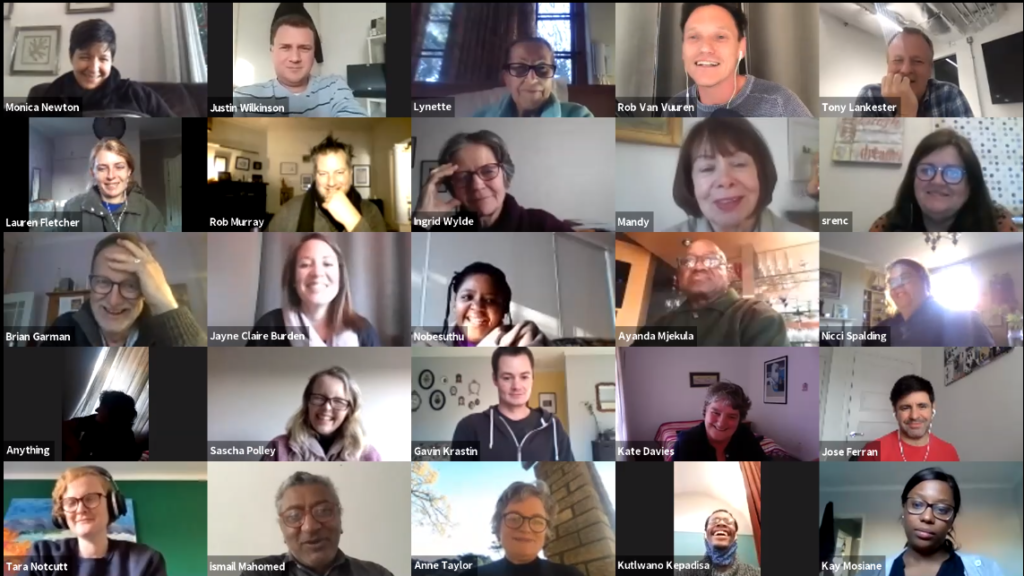 Dozens of current and former colleagues, artists, journalists and friends awaited a very surprised Kate Davies when she joined what she thought was a regular work-related Zoom meeting on Wednesday. To celebrate the Administrative Director’s 25th year with the National Arts Festival, colleagues organised a big Zoom party and invited supporters and colleagues from across South Africa and the world. Screenshot: Ryan Bruton

Comedian Rob van Vuuren and former National Arts festival CEO Tony Lankester were co-hosts to a Zoom party of 50 people who wouldn’t for anything have missed the chance to celebrate well loved friend and respected colleague Kate Davies’s 25-year milestone at the organisation.

Live and recorded interactions included a performance buy guitarist Guy Buttery, and many tributes and heartfelt thanks.

Integrity, courage, patience, kindness, efficiency and getting the job done properly were descriptions that came up repeatedly, with milk tart and empathy also featuring strongly.

“A rock-solid foundation for artists” is how Van Vuuren described Davies’s role at the National Arts Festival. And theatre-maker Rob Murray described Davies as “the inspiration and rock we’ve all built our careers on”.

Justin Wilkinson of the Slick ‘n Sleeve Theatre Collective that brings the popular “Butler” series to the Fringe every year weighed in on a similar thread.

“Like a Zen Buddhist in mayhem” was how former Director of the Amsterdam Fringe, Anneke Jansen, zooming in from  the Netherlands, described Davies.

Rhodes JMS Design lecturer Brian Garman, who together with his students designs the Festival Programme every year under direction from Davies, said she is the best editor he’s every worked with.

Along with eulogising Davies’s famous milk tart recipe, former Artistic Director Ismail Mohamed wrote in the group chat, “One of Kate’s most significant contributions to South African theatre is the passion with which she invested in the Student Theatre Festival. Even when budgets needed to be cut Kate found innovative ways of sustaining it.”

The Festival’s Executive Producer Nobesuthu Rayi described her first encounter, then as a young artist, with Davies and how incredibly patient she was about explaining and re-explaining things.

And Technical Director Nicci Spalding spoke of the way the Festival “family” meets the challenges they encounter – “no matter what is put in our way”. “Kate is a very important part of making sure we stay true to our responsibility. She leads with integrity.”

Past and current Festival CEOs were unanimous on Davies’s role at the heart of the Festival.

“Kate cares about the artists,” said Lynette Marais. “The Festival has been through some very hard times and we worked together to find sponsors.

“She works like a Trojan and the artists love her.”

Tony Lankester said, “Kate was, throughout my tenure at NAF, the company’s backbone. She is thoroughly committed to it, works day and night to keep the wheels greased and turning, and was always my go-to person when I needed to sense-check an idea. I always knew I’d get an honest response from Kate, just as I knew that if I left something in her hands she’d get it done, and done well.

“For 25 years she has played this role – to thousands of artists, tens of thousands of visitors and dozens of staff who have come through the Festival’s doors. She’s been a kind and thoughtful mentor to many, and a friend to many more. Long may her commitment and contribution continue.”

Monica Newton’s baptism by fire as CEO started in January this year – barely three months before the Covid-19 national lockdown kicked in. She spoke of Davies’s role as a valuable team member.

“I admire Kate’s strength of character and fortitude. She has the ability to cut out the noise and focus on what’s important.”

Kate’s daughter Rachel and husband Mike helped conspire to make sure she was in the right place at the right time for her Zoom party. A live-videoed treasure hunt at Davies’s lockdown base led to the gift of two prints from photographer Roddy Fox’s Lockdown Sunbirds series.

The Virtual National Arts Festival 2020 content (with a few exceptions) is available till 31 July. Festival passes expired at midnight on 16 July so you’ll need to buy an individual ticket for any shows you want to see – prices range from R25 to R45.

The daily programmes of curated work are now available under genre and all the recorded webinars have been extracted and can be found under their own heading. The same is true for exhibitions, virtual green and visual art. Find it all at  https://nationalartsfestival.co.za