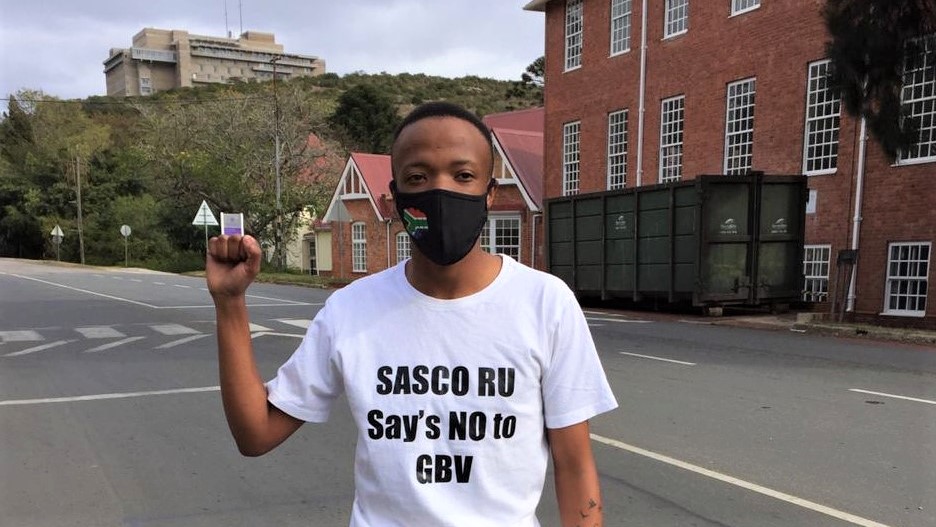 For the online component, Goje says they have appealed to artists, in the spirit of the National Arts Festival, to create content that raises awareness of gender-based violence. The page is under construction, and will be a platform ‘declaring support for survivors of GBV.’

In addition, surveys and other forms of information gathering, will provide statistics, offering a clearer picture of GBV, says Goje. The campaign will be grounded in education about measures people can take as a starting point, and helplines.

“People do not really understand how things work,” said Goje.

In order to cater to the socio-economic disparities of Makhanda, and the unequal lack of access to online platforms, Goje says Sasco branch members will put up posters, and distribute pamphlets informing Makhanda of helplines and what they can do if they experience GBV.

The campaign came out of a virtual brainstorming held late last month by Sasco’s BEC, and the Media and Orientation sub-committee met for one of their weekly meetings to finalize ideas last week.

In the second phase of Sasco’s GBV awareness campaign, they plan to collaborate with student societies within the university, but this has obviously been difficult as students have been away from campus.

Sasco intends to ask GBV survivors, if they are willing, to share their story.

“These would serve as testimonials and link up with the online campaign,’ Goje said.

“It is important that womxn are able to tell their story: if it resonates with someone who watches, perhaps it will allow them [in turn]to come forward. If gender-based violence survivors are comfortable opening up, we can facilitate the process, and hopefully they find some healing.”

”GBV is a big problem and not enough is being done,” said Goje. “Within the university environment it exists as a huge problem which people sometimes downplay.

“The university tries advocacy against GBV, but it is also the mentality of people.”

Goje says the aim of the campaign, the ”little that we can do” will be to engage with Makhanda, teach society about patriarchy and change ideas about assumed inherent inequality between the sexes.

“Solidarity is one way of meeting [GBV],” Goje said. “With law-enforcement failing and the government not responding enough, it is within the community that we can stand together to help each other.“