‘Time to change the way you think’ 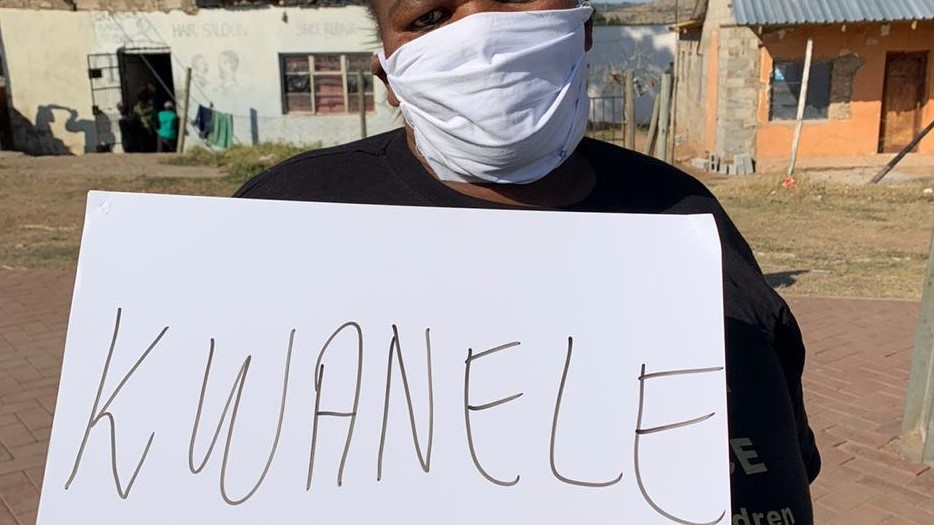 In a dramatic protest, a group of women from the Unemployed People’s Movement (UPM) lay in Raglan Road alongside Fingo Square on Friday 26 June. Around 80 women and some men dressed in black also held placards with anti-GBV messages for the Friday midday traffic at the busy intersection.

Organisers Siposethu Manyati and Sinesipho Soxujwa spoke to Grocott’s Mail about the silent protest and explained why they hope Makhanda takes the message to heart.

“We saw that there are many cases of femicide around South Africa. We wanted to address it as well,” said Manyati. “We wore black to show we were in mourning for all the women and children who have died because of this violence.”

“It was a very emotional event,” said Soxujwa. “Gender-based violence affects all of us. It happens to people we know and so we had to do something about it.

“Being a woman in South Africa, particularly in Grahamstown, is very hard. It’s not easy at all. You’re not really allowed to express yourself.

“If you wear something short, people say, ‘That’s why you get raped.’

“But that’s how you express yourself. People are stuck in this paradigm of women should do this thing and not that thing.

“Being a woman in Grahamstown is not easy. You don’t walk out in the streets at a certain time. Let’s say you’re getting your period and you want to go and buy pads.

“But you can’t do that because its ‘late’ and you’re going to be raped or violated.

“It’s not easy. You have to go out because you’ve got to buy essentials. But you can’t. You fear for your life. It’s not easy.”

“Being a woman in Makhanda is very painful,” Manyati agreed. “Not only are you dealing with an abusive partner or husband; you have to endure the painful treatment of not being able to get a job. You have to sleep with someone in order to get a job.

“Not only that, but everything impacts women in a bad way. For example, if there’s no water in the household, as the woman, you’re expected to go and collect water.

“It’s like we’re living in the 19th Century when you’d have to go to the river to collect water.

“In our case, you have to go to a special tank that’s provided for your whole community. That is hard in itself. But in order for you to cook, in order to make sure the children are washing their hands, you have to use that tank water. And sometimes there’s no water in them because the municipality hasn’t come.

“It’s very painful to be a woman here in South Africa.”

For all these things to change, says Manyati, individuals have to change their perspective on the way they think about women and what women are supposed to do.

“The government should prioritise helping women become empowered. Help them with programmes that will give them self esteem,” Manyati said.

“If Government could give women the space they need during this period of increased gender based violence – create a space where women can come and share their stories. Because by sharing that kind of information, others will be able to learn and not make the same mistake of remaining silent.”

“In order for society to be kinder to women, first, young boys must be raised in the right way,” said Soxujwa.

“Also I think people must stop being rape apologists and I think the people who defend rapists are as trash as the rapists.”