Windy weekend for Makhanda as cold fronts move in 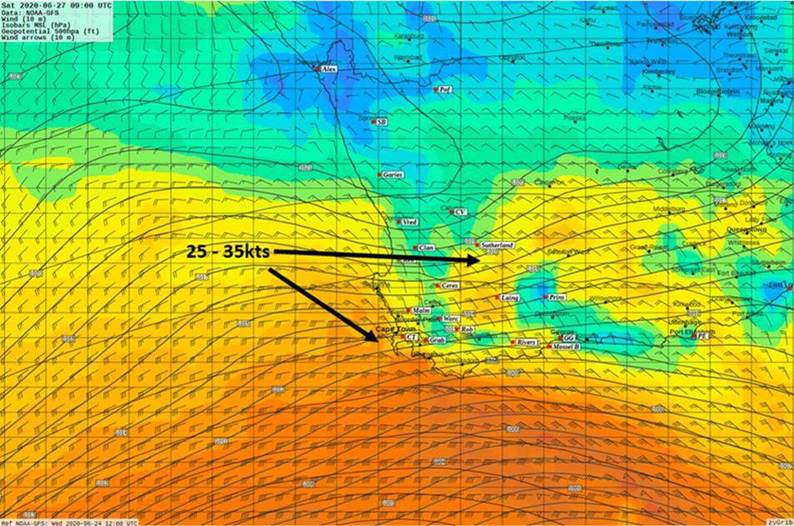 *UPDATED WITH WARNINGS FOR COASTAL AREAS*

The southern parts of the country are about to witness a series of cold fronts starting from later this afternoon, continuing into the weekend.

The first cold front associated with a steep upper-air trough is expected to make landfall later today (25 June 2020) and should move over the Western Cape Province, clearing from Friday, 26 June 2020, midday. This system is expected to result in strong north-westerly winds (60-75km/h), touching gale force winds (80-85km/h) along the south-west coast, where very rough seas are expected.

Another cold front is expected on Saturday afternoon, 27 June 2020, resulting in strong to gale force (80-85km/h) winds along the south-west and south coast and adjacent interior, high seas as well as heavy rain leading to localised flooding in places over the western mountains, where rainfall amounts between 25mm to 35mm, reaching 50 mm are also expected.

The public is advised to stay home due to the strong winds affecting the roads, especially for high-sided vehicles and localised temporary structures.

In Makhanda, the South African Weather service predicts increasingly strong winds throughout the weekend, starting at 27km/h on Friday and building up to to 46km/h on Sunday, dropping to 27km/h on Monday and Tuesday and only on Wednesday returning to a calmer 9km/h. Temperatures in Makhanda will be at their coolest, too, on Sunday (5-17C) warming up to 23C on Wednesday.

No rain is predicted over the next six days, however.

Possible impacts due to high seas include:

Beach goers are advised to take caution as seas are expected to be choppy during the weekend.

On Friday a cold front is expected to brush the coastline with isolated showers and rain along the coastal regions for the Eastern Cape.

On Saturday a second cold front moves south of the country with winds expected to increase to 60km/h, reaching a maximum of 90km/h at times through the evening and into Sunday evening along the Eastern Cape coastal areas.

High seas with waves heights from 6-7m along the South Coast from Saturday late afternoon, spreading to the Wild Coast on Sunday.

The public is advised to stay home due to the strong winds affecting the roads, especially for high-sided vehicles and localized temporary structures.  Beaches goers are advised to take caution as seas are expected to choppy for the weekend.

On Saturday winds expected to increase to 35kts mainly along the South Coast, reaching a maximum of 50kt through the evening and into Sunday.

There will be localised disruptions to ports and small harbors with risk of small vessels capsising and medium vessels dragging. There will be a danger in navigation.

The South African Weather Service will continue to monitor any further developments relating to this weather system and will issue subsequent updates as required. Furthermore, the public is urged and encouraged to regularly follow weather forecasts on television and radio.

Updated information in this regard will regularly be available at www.weathersa.co.za as well as via the SA Weather Service Twitter account @SAWeatherService

Download our WeatherSMART APP free from the App store: