Men take a stand against GBV 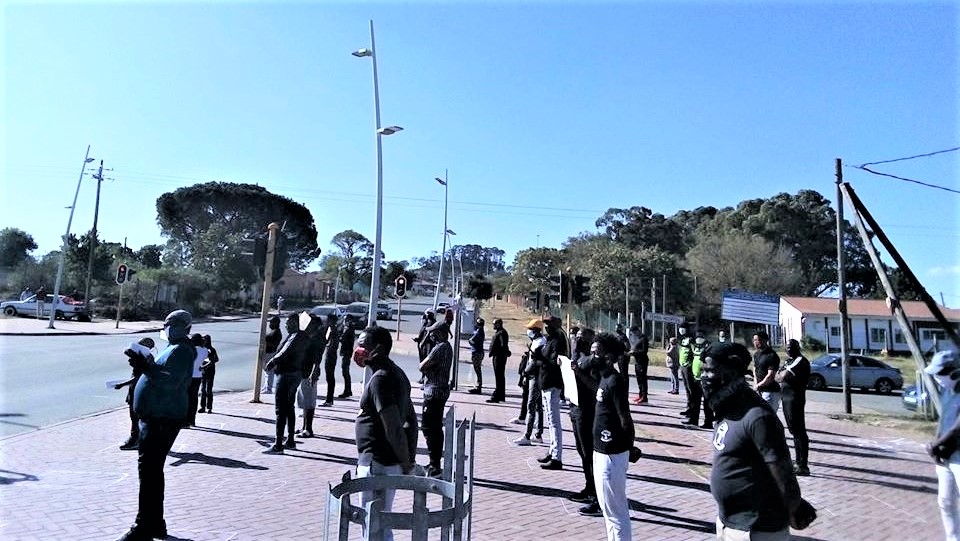 A group of Makhanda men stands in a vigil against gender based violence at Fingo Square on Sunday 21 June. Photo: Akhona Mafani

“Act now on gender-based violence so that the men of future generations don’t have to take responsibility for sins they didn’t commit,” says Makhanda poet Akhona Bhodl’ ingqaka Mafani. Mafani was among those at a vigil at Fingo Square on Sunday 21 June for survivors of gender-based violence.

More than 100 men gathered for an hour on Father’s Day, days after President Cyril Ramaphosa read the riot act to abusive South African men, saying barbaric attacks on women and children must end.

“The purpose of the Makhanda fight against GBV staging was to establish a different kind of men’s voice,” explained Mafani. “We want to say we share the same sentiments with the victims of GBV atrocities. That as Makhanda men, we are taking a stand. We decided to silence the speaking a bit and invest in action in these difficult times. Men, old and young, gathered to share wisdom.”

The action was sparked by a Facebook post posing the idea of using Father’s Day to reject violence against women.

One of the organisers, Vuyani Jacobs, said, “We wanted to show women our support against GBV. We said, let’s take one hour in our day and show that not all men are killers.

“I think that if we can have workshops at school and teach young men, they can learn something. As men, let’s start to work together to change the mindsets of other men,” Jacobs said.

Also out to educate men and other boys were members of the Extension 6-based MARU Basketball Club who, with their coach Bhongo Seteni and captain Sinixolo Futshani went house to house last weekend, speaking about GBV.

“Our aim is not just to be the greatest team, but be the change our community needs,” Seteni said. “We’re willing to do whatever it takes to show our community that we love and care for them. We believe as the youth we can do more with the support of the community and our beloved town.”

“GBV is a violent act based on gender, in the form of physical or emotional abuse,” Mafani said. “I think a lot of men need to cry out and look for help themselves, because otherwise they die inside and they respond abusively.”

“Most important, fighting will never be a solution. It never resolved anything  in our history and it will destroy us in our present. Let us talk! Makulungiswe umqolo uphandle.

“To men, I would like to say, if we can’t act now by addressing the negative norms we find within, we give the men of upcoming generations the responsibility of accounting for sins they’ve never committed,” said Mafani. “Let us tighten the screws.

At 11am on Friday 26 June, at the same venue, Fingo Square (Soccer City/ Jackie Chan) a group of women will hold the ‘Women’s Lives Matter’ event. “Social distancing, masks and not more than 50 people,” organisers said in a Facebook post.