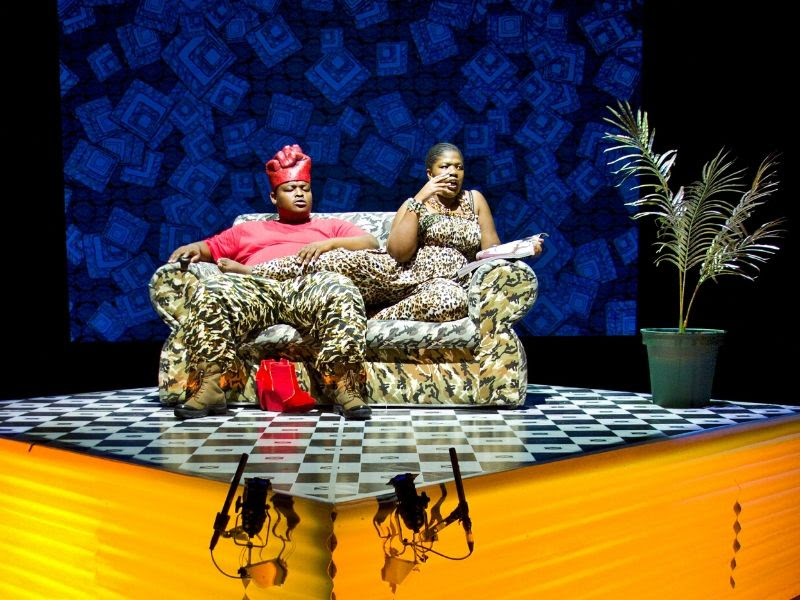 As the 25 June launch of South Africa’s first Virtual National Arts Festival draws rapidly nearer, the Festival has released further details about additional shows to expect on the diverse and adventurous programme that will see the Festival coming into the homes of audiences for the first time ever.

“We’re seeing the Festival come together. Work that started as ideas, turned into discussions and are now full pieces are being uploaded to the Festival website for audiences to experience in just a few days’ time,” said Virtual National Arts Festival Artistic Director Rucera Seethal. “Our team is nothing short of phenomenal, to bring to life something which was, just a few chaotic weeks ago, only a vision. We now have an online festival reflecting artists from diverse backgrounds and disciplines. I am anxious to share it with audiences and see this next chapter begin.”

The programme will take place entirely on the Festival website www.nationalartsfestival.co.za and will consist of a daily Curated Programme of shows, workshops and events; and a special Virtual Fringe section with multiple performances to choose from and links to shows happening outside of the Festival’s secure environment.

Audiences will be able to buy passes from R80 per day with a special price of R600 for an all-access pass for the entire 11 days. Virtual Fringe events will be individually ticketed and there will be a free-to-browse Virtual Gallery area as well as a Virtual Village Green where Festival-goers can browse crafts and handmade wares. The Standard Bank Jazz Festival remains an integral part of the Festival experience in the online iteration too.

“The Virtual National Arts Festival won’t replace the live Festival experience and we will return to our home in Makhanda as soon as we are safely able to,” said CEO Monica Newton. “But this year of unexpected challenges has also brought us an extraordinary opportunity to experiment with new forms.

“We are also able to bring the National Arts Festival to audiences at home and abroad who may not otherwise have been able to attend the live experience. We hope that bringing the Festival to the convenience of people’s screens will help lift our spirits during these times and present the artistic works that inspire, challenge and reveal new perspectives.”

The first set of shows was announced by the Festival on the 10 June and new shows have since been added to the programme. There are around 250 shows currently – a number that continues to grow as more Virtual Fringe shows are submitted.

Interdisciplinary performance artist, Oupa Sibeko has collaborated with filmmaker Nicola Pilkington in THE REBIRTH OF IQHAWE; a short experimental dance film, exploring the potential to hybridize Sibeko’s Butoh-inspired performance practice into the film form: fragmenting, collaging and refiguring the body in time and space as a means to capture the corporeal expression of the movement. The film has been scored by Geoffrey Diver.

Shortlisted for the CASA Award for Woman-Identified Playwrights 2018, A HOWL IN MAKHANDA is reshot for the vNAF, bringing a more intimate lens to the stage for this very topical play. Qondiswa James works across film and theatre and in this semi-autobiographical work, two black and two white South African teenagers at an elite all girls boarding school break the rules and find the disciplinary board deals with each of them differently. Using passages from Sylvia Plath, Kurt Cobain and Allen Ginsberg, the play catalogues the struggle and resistance of girlhood, and makes visible the normalisation of criminalising of black bodies.

Shmerah Passhier offers a Virtual Reality short film THE EYE IS BLIND THAT CANNOT SEE described as an African Science Fiction and homage to Credo Vusamazulu Mutwa (1921-2020), with Albert Ibokwe Khoza taking the lead.  Inspired by a mythical African-cyborg being of Credo Mutwa, the viewer is teleported into the center of the pupil of a cyclops’ eye.  The eye is all seeing with eye-lashes extending out in all directions, forming braided connections to African women-cyborgs north, south, east and west of the 360 degree VR camera, placed at the center of the action.

The Music Plays On

In PONTE MAPUTO DURBAN, pianist Sibusiso Mash Mashiloane from Durban and multi-instrumentalist Matchume Zango from Maputo have reinterpreted each other’s works. The music journeys through an improvised language of a lifetime of learned sonic therapy, which takes the listener along every note towards a form of healing. This music pulls worlds once parted by colonial separations together in a celebration of sound.

Bringing beats from across the country, continent and diaspora, Cape Town based Atiyyah Khan and Grant Jurius present FUTURE NOSTALGIA which emphasises listening and education through sound, Xolile Madinda opens the Makhanda based BLK POWER STATION’s doors online and NYEGE NYEGE FESTIVAL in Jinja, Uganda takes us on a tour through music subcultures on the continent.

Liso the Musician brings her individual flair to a musical style she has coined Ancestral Jazz. She has joined forces with music video director and cinematographer Motion Billy to create ZAF’INGANE, a theatrical, story and spiritual performance. Award winning stage and screen actor Tshamano Sebe, currently on screens in 8 on Netflix, will make a cameo appearance in his debut live musical performance.

The much lauded Wits Trio – made up of Zanta Hofmeyr on the violin; Susan Mouton on cello; and Malcolm Nay on piano – will be presenting some of the beautiful chamber music of genius composer Beethoven in BEETHOVEN 250 YEARS LATER. Jill Richards and Waldo Alexander will also mark the 250th year of Beethoven’s birth with BEETHOVEN 250.

THE TEXTURE OF SILENCE explores the interface between composed and improvised music and visual art. It brings together various indigenous southern African musical instruments, jazz language, graphic notation for music and the visual explorations of artist Mzwandile Buthelezi. Across disciplines, Cara Stacey, Keenan Ahrends, Mzwandile Buthelezi use this project to explore both fixed ideas and spontaneous responses and in this way create new music.

With the support of Pro Helvetia, Swiss artist Mats Staub, who lives and works in Berlin, will present DEATH AND BIRTH IN MY LIFE which invites the audience to listen in on a series of intimate conversations about the most moving and challenging experiences in life. This latest of his long-term projects asks after participants’ existential experiences. Participants are filmed both speaking and listening so the audience is able to see both speakers and listeners simultaneously.  NAF audiences can also contribute by sharing their reflections with each other and participants, tapping into universal human experiences in this time of isolation.

In collaboration with IFAS (Institut Francais, South Africa), AFROPOLITAN COMICS: from South Africa to the continent, images in conversation is an online exhibition which aims to present a conversation between South African comics and comics from other African countries. It showcases the work of 16 artists, including Loyiso Mkize and Luke Molver from South Africa, as well as Algerian artist Samir Toudji (aka Togui) and Cameroonian artist Reine Dibussi. The exhibition also forms part of France’s Year of Comics, a celebration through multiple events and exhibitions.  South African content is curated by Tara Weber and Raymond Whitcher with Jean-Philippe Martin (scientific advisor at the Cité) and Joëlle Epée (comics author and director of the Bilili BD Festival in Congo-Brazzaville) curating comics from other countries on the continent. It is conceived and developed by French creative and digital studio Cher Ami.

Presented in partnership with the Goethe Institut, WOMEN IN AEROPLANES is a multi-faceted, multi-local and research-based project which has had several iterations since 2017. It aims “to get a more comprehensive idea of the notions of independence and interdependence which allows us to see and understand a women-informed, shattered presence of complicated dependencies.”  Curated by Annett Busch, Marie-Hélène Gutberlet, Magdalena Lipska and the Otolith Collective, the vNAF connects to one aspect of this far-spanning project, THE PRESENCE OF ABSENT BOOKS, a series of short voice notes about missing books. The work is narrated by Isabel Hofmeyr, Sarah Nuttall, Mapule Mohulatsi, Tinashe Mushakavanhu and Connie Joseph.

Makhanda’s own Professor Anton Krueger’s playful, interactive, live Zoom show explores the nature of Mindfulness in THE VOICE IN YOUR HEAD. At times a performance, at other times a participatory game, the experience is a lively commentary on the nature of performance itself.

Juliet Jenkin presents WOOLWORTHS, an epic satirical radio play on middle-class South Africa. Previously staged at the National Arts Festival, and elsewhere to resounding applause and a fair amount of wincing, this digital version tells you everything you didn’t know you knew about the bourgeoisie. Charging through Trellidors, security estates, rhino charities, gold mines, shopping malls, rugby stadiums, game farms and bank queues, this epic choral work is a force of culture. Experience middle class white angst, from the comfort of your own home.

PFUTA PFUTA is a curious case of extra-terrestrial manifestations in Zimbabwe. On September 16, 1994, nearly 60 children at Ariel Primary School in Ruwa Zimbabwe claimed to have witnessed the landing of an unidentified flying object (UFO) whilst on their morning break. The children stated that they interacted with a creature that emerged from the UFO. This creature is believed to have been Mathos Pfumao. Mathos Pfumao is Zimbabwe’s greatest Shona sculptor. An exploration of the sonic, visual, spiritual and social aspects of director Joshua Chuindiza’s Chewa, Shona and Nguni heritage, taking on the form of music/sound recordings and performances, video art.

In a vNAF partnership with Distell, audiences will get a taste of the Distell National Scriptwriting competition winner, Amy Wilson’s work. This year the vNAF also presents two new script development projects. Twist Theatre’s annual Novel-Script Project which brings together writers from a range of Sub-Saharan African countries to strengthen the pool of strong writer’s voices from the South, and to network writers and directors throughout the region. Assitej’s In the Works project similarly supports new playwrights focusing on youth and young adult audiences. Audiences will be able to glimpse upcoming talent and new voices by viewing edited previews of each of the works across both projects.

Opening a window into the creative interpretation of both national and international issues, the Virtual National Arts Festival will reach out beyond South Africa to wake up a world hungry for healing. Expect the Festival’s eleven days to be a soul-searching, entertaining and enlightening ride – wherever you are in the world.