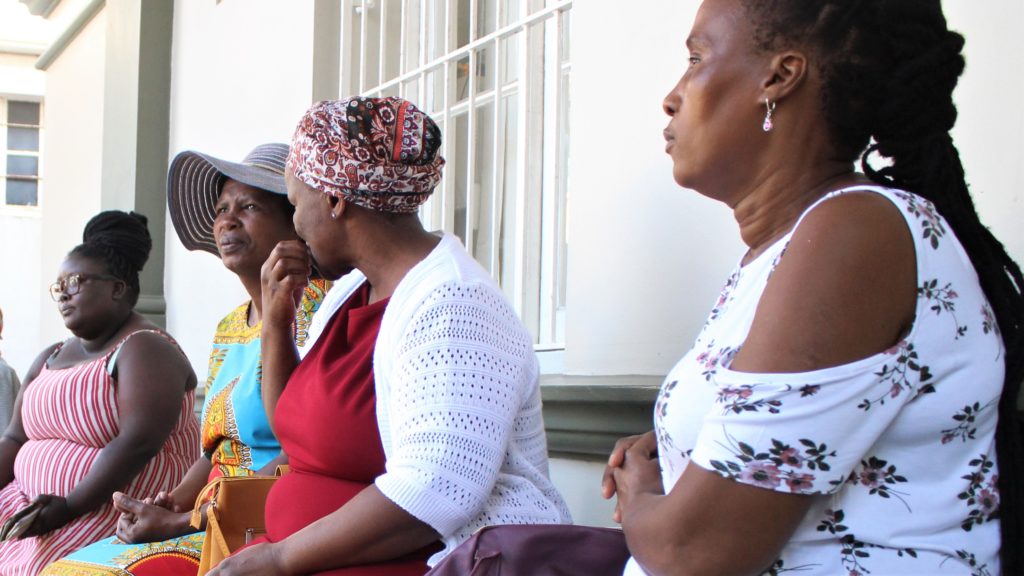 Women outside the Magistrate's Court in Makhanda on 28 May 2020 wait to hear about maintenance payments they have not received since March. Photo: Sue Maclennan

By WENDY NZAMA
Dozens of Makhanda mothers remain without their monthly child maintenance payments as the Covid-19 lockdown exacerbates a glitch in the system at the courts. Grocott’s Mail reported at the beginning of May on the plight of women who usually receive maintenance payments for their children through the Magistrate’s Court in Makhanda.

When we spoke to them again this week, some had gone for as long as four months without receiving much needed payments to support their children.

The money is deducted from the salaries of parents employed by various government departments and is paid through the court.

The women who spoke to Grocott’s Mail this week confirmed that they hadn’t received the payments yet and were struggling to cope. “The problem hasn’t been resolved,” said Philippa Sauls.

“I went there to ask about the money. They do not allow us inside, so we talk through the window. The only thing they keep saying is that the system is offline.”

Darlene Goliath, said she’d come to the court several times since the last date she should have been paid.

“I haven’t received my payment this month. When I go there they tell me the system is slow and they can’t do anything,” Golliath said.

“We are suffering and our children are hungry,” Goliath said. “They do not communicate anything with us. This is truly unacceptable”.

Ministry of Justice and Correctional Services Spokesperson Crispin Phiri said everyone would finally receive their payment by 30 July 2020.

“Not all employers agreed to pay directly into the account of the end recipients,” Phiri told Grocott’s Mail. “Some choose to pay in bulk through MojaPay.”

“The system is new with its own teething problems,” Phiri said. “But when these are resolved, everything runs seamlessly.

“Those who are already on the system will receive their monies, while others are being added on. Payments are slow due to the problem with the system.

“All payments will be made immediately when employers deposit into Mojapay, including for those months where monies bounced on the old JDAS account.”

Phiri said around 279 people in Makhanda were affected by glitches in the change-over.

Previous ArticleEC command council welcomes crime rate decline
Next Article One day at a time: Letter for parents in the lockdown