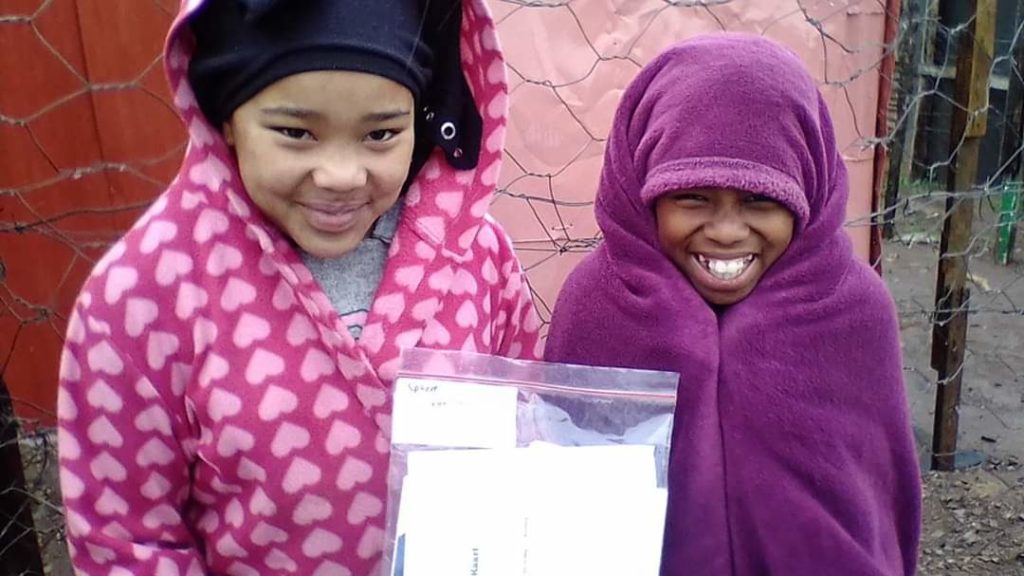 With schools closed for over two months, parents in poorer Eastern Cape households have been forced to juggle their duties as breadwinners with the new challenge of teaching their children. Many have done this with limited access to literacy materials and data, exacerbating the already-huge chasms in the schooling system.

A number of local literacy organisations have partnered with parents to support productive and creative learning spaces for their children under lockdown. They have distributed resources to the doorsteps of hundreds of homes, built WhatsApp networks and facilitated access to zero-rated websites.

Anna Talbot is the Community Engagement Volunteer Program Coordinator at Rhodes University. Her job title is a bit of a mouthful, and her responsibilities are no different. Towards the end of 2019, Talbot started BuddingQ, a five-week volunteer-based early childhood development (ECD) program that rotates throughout the year. BuddingQ focuses on fine and gross motor skills development, which are vital for improving the foundations for formal literacy.

Talbot and her team of volunteers reached over 500 children a week in the disadvantaged schools in and around Makhanda. Under lockdown, those same children were left without the valuable stimulation that BuddingQ provides.

Prompted by cries for help from struggling parents, Talbot started three Makhanda ECD WhatsApp groups, for English, isiXhosa and Afrikaans speakers. The groups were initially small, started through the BuddingQ teachers, but technology allowed Talbot and her team to reach even more parents. There are 152 parents in the English ECD group alone.

“The whole idea is to keep it super accessible. It’s really low on data so people don’t have to download as much, and also using minimal resources, and as South African as possible,” says Talbot.

She sends exercises, stories and pictures on the groups on a daily basis. They are all easy to follow, allowing parents to help their children learn.

Tabisa Booi, who is both a parent and a teacher, relies on these resources for her Grade One class. Booi is a Grade One teacher at Gugulethu Primary in Ndevana, outside King Williams Town. The creation of a class WhatsApp group has proved a challenge, as many of her pupils’ parents do not have access to data.

“I have 50 learners in my class, but on the WhatsApp group, we only have 11 parents,” says Booi. Luckily, some of her pupils live in close proximity to one another in Ndevana and are able to share resources with those who do not have WhatsApp. Booi worries about the pupils who she has not been able to contact – she has compiled a catch-up file for their eventual return to school but admits that the lack of stimulation for these children is very unsettling.

The disparity of South Africa’s education system is demonstrated by another parent’s testimony. Rina Mehlomakulu, who is also on Talbot’s ECD group, has two children at school in East London. Mehlomakulus’ children’s experience of lockdown education is very different to Booi’s: “For the big one, they load all activities and tests on Google Classroom and with my little baby, we get activities either via WhatsApp or they load them onto Facebook”.

However, just like the parents in Ndevana, Mehlomakulu also gets overwhelmed at the prospect of educating her children.

On 11 April, the Bua-Lit language and literacy collective released a statement appealing to the National Department to reconsider online learning as most South African learners have no access to online learning material or equipment.

“The vast majority of our learners attend no-fee schools in townships and rural areas, many of whom are already struggling in a system that is not designed for them. Now more than ever it is crucial to recognize who our learners are if we are serious about tackling the stark inequalities that characterize our education system.”

Cathy Gush, the literacy coordinator at the Lebone Centre in Makhanda, agrees: “You can’t expect parents to be delivering the curriculum to children because they’re not in a position to do that.” She, along with her colleagues, has worked intently to try and contact the parents of the children involved in the Lebone Centre’s programmes. They have prepared to aid these families with educational resources such as books, Wordworks Literacy packs and Nalibali supplements and food parcels.

Despite the challenges of lockdown, Gush is optimistic about the opportunity which parents and their children have. “I think it (lockdown) has presented a golden opportunity for more creative and informal learning opportunities to take place in homes and communities that aren’t normally there because of the school structure,” she said. These activities include parents involving their children in cooking, playing games together and listening to SABC educational channels on the radio or TV. “There is a lot of learning that can take place through meaningful activities.”

Talbot took this into consideration in creating the WhatsApp groups, as she did not want to pressure the parents; after all, most of them are not teachers. In general, the BuddingQ groups work with 2-7-year olds and the best way that this age group learns is through play. “So, the focus of the WhatsApp groups is really on what parents can do, and what is most useful at the moment for the children,” says Talbot. “Even simple things like sorting the laundry – you’re learning patterns, matching and all kinds of skills.”

Mehlomakulu has been cooking and crafting with her children; one of their favourite activities is decorating and colour-coding cupcakes. Booi has gone the extra mile for her pupils’ parents; she videos herself doing selected activities from the WhatsApp feed with her own child so that parents can see what is required of them. “The kind of parents we have in Ndevana are really hands-on, they’re very helpful and excited for their children to learn,” says Booi.

Claresa Arends, a Grade R teacher at Adolph Schauder Primary in PE, says parent involvement for her learners was not the case prior to lockdown. “Under normal circumstances, we could not get parental involvement from most of our parents so now that they have the time, they first had to get used to spending time with their kids.”

Arends believes this is the first time many parents have realized the importance of their involvement in their children’s education. “More than 80% of my learners’ parents are now actively involved. They can see where the needs for their kids are and I know this is only the start. I strongly believe that most parents will be actively involved now.”

Arends acknowledges that teaching under lockdown has been a great adjustment for not only teachers and pupils, but parents as well. Through posting short recorded video lessons on her parents’ WhatsApp group, she has been able to bring some relief to parents’ struggles. She also created ‘Teacher Clare’s Teaching and Learning’ Facebook page to share her methods with other teachers, pupils and parents.

“I decided to do videos so that pupils can still have a bit of a feel of school. It is also so much easier for all parents when they don’t have to conduct lessons. Kids can watch the videos and parents just help with the activities. This also helped with language since not all my pupils’ parents speak English.”

The lockdown has also prompted many to zero-rate their educational sites and learning portals. Section 27 has aggregated a variety of these free online resources, together with regularly-updated broadcast schedules to assist learners during the lockdown. Zero-rated resources include African Storybook, which provides open access to picture storybooks in multiple African languages, and Thunderbolt Kids supply Natural Sciences and Technology resources from Grade 4-6.

While disparities in the Eastern Cape’s education system are profound, the work being done by parents and educators has proven that teaching at home can be successful through active parental participation and access to educational resources.

Previous ArticleResidents take service delivery into their own hands
Next Article Schools ready, except for masks