Justice delayed for many under lockdown 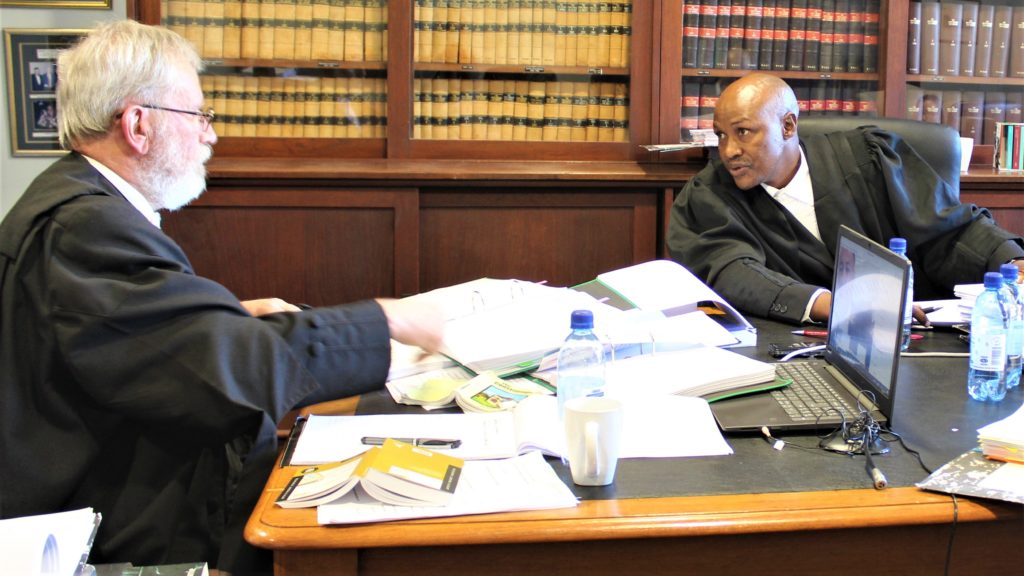 Lawyers for the Unemployed People’s Movement prepare for the virtual hearing of an appeal application on 8 May 2020 by Makana and the Province.

By Nasi Hako
Local lawyers have warned of severe backlogs in the legal system caused by the COVID-19 lockdown.

According to the Bill of Rights, every accused person has the right to a fair and speedy trial that begins and ends without unreasonable delay.

Lawyers have been debating whether or not the lockdown delays could be seen as ‘unreasonable’ given that the directives were issued under the National Disaster Act.

A medical malpractice lawyer said that while the slowdown of the legal system arguably contradicted the Constitution, the restrictions had been issued under the Disaster Management

Act and were therefore “still the law” and had to be respected.

Physical access to the courts was restricted under the National Disaster Act and the Chief Justice ruled that only urgent matters be heard in the courts.

Civil cases that were not deemed urgent were not placed on the court roll.

“Under Level 5, we weren’t even permitted to go back to the office,” said Dullabh.

The postponement of matters and the closing of courts continued through Level 5 of the lockdown.

If matters had already been enrolled, then the date given could not be deferred and the courts were urged to make the necessary adjustments to resolve the matter ‘on paper’ or via video conferencing. Otherwise, if the matter had not been enrolled, then justice would be paused until the end of the Level 5 national lockdown, even if summonses had been issued.

Lawyers said delays had negatively affected poorer clients. For example, those without access to email found it difficult because they were unable to travel to court to discuss and legal matters and sign documents

One attorney said that someone who had been negatively affected by delayed justice would need a lot of power or money to contest the delays.

The Legal Practice Council obtained and implemented an interim measure to issue valid permits from 1 May, with certain restrictions. Before then, many local attorneys said, a significant number, if not all, of their cases, were postponed under the Level 5 lockdown.

A litigation and civil matters lawyer said that the number of matters classified as urgent has increased significantly as other matters are were not being heard.

He said that those currently awaiting criminal trials were bearing the brunt of the delays.

Criminal lawyer, Alexio Kawondera, said some defendants were awaiting trial with a postponed matter, but that those matters were less serious making it more likely that the defendant in question would be out on bail. Kawondera has confirmed that cases associated with those in custody were deemed urgent matters and were being dealt with.

However, Kawondera said some accused might feel unsafe in their communities due to the nature of their cases, but have to wait until their matters are attended to at a later stage.

Nevertheless, Kawondera believes that the justice system has been reasonably efficient.

One local attorney said some RAF plaintiffs were disabled while others are in desperate need of financial compensation. He estimated that RAF matters represented 70-80% of the civil trial roll.

The lawyer said none of his cases had proceeded, as they had not been classified as urgent.

“It [has been]a frustrating period,” he said.