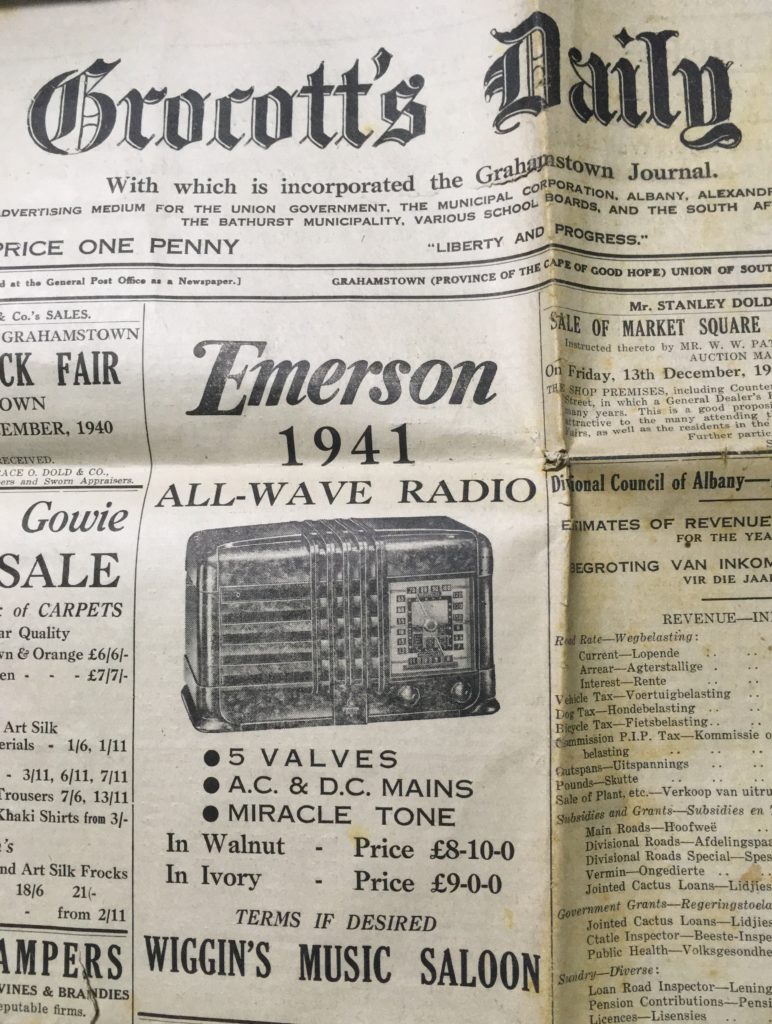 Part Two of this series on the history of Grocott’s Mail begins in 1920, a year of momentous changes at the newspaper and in its home city, Grahamstown. The world was recovering from the first Great War and the Spanish Flu pandemic – both of which claimed many hundreds of lives from the population of Grahamstown.

Under the steady hands of William Ellington Grocott and Richard Sherry, Grocott’s Penny Mail had grown to eight pages during the War, but persistent paper shortages forced the newspaper to revert to its four-page format  published three times per week.

Ironically, for a few years the Grocott’s Penny Mail belied its name and cost twopence, probably due to the post war increase in printing prices. In the 1940s, the price reverted to one penny  for a few years.

In 1920, Grocott’s and Sherry incorporated its long-time rival, The Graham’s Town Journal, or simply The Journal as it was known then, and changed its name to the Grocott’s Daily Mail to reflect its new publishing schedule.

It remained a daily until 1965 when the schedule was changed to publishing on Tuesdays and Fridays.

As major changes were happening at the newspaper, Grahamstown residents were exploring ways of commemorating the centenary of the 1820 settlers. A special committee convened for this purpose created a ‘living memorial’ in the form of an immigration scheme to assist British immigrants to South Africa.

In an article published in Grocott’s Penny Mail on 20 August 1919, the mayor of Grahamstown, CW Whiteside made no attempt to hide the racist motivations behind this scheme. He said that South Africa was threatened by the predominance of “the Native” over the white and “It is only by the introduction of fresh blood of the right kind that we can counteract this.”

The Second South African War of 1899-1902 and the First World War 1914-1918 were high points for Grocott’s journalism. It had offices in Johannesburg, East London and even London for a while as the newspaper was the prime source of information for Grahamstown and a significant part of Southern Africa.

This preeminent position was lost as radio had taken over as the first source of breaking news by the time the Second World War broke out in 1939. Newspapers were still providing news, photographs, maps and analysis but radio occupied the prime news spot.

This appropriation was underscored during the war years, as newspapers carried adverts for ‘all-wave’ radios on their front pages.

In the 9 December 1941 edition, the biggest advert on the front page of Grocott’s Daily Mail was for an Emerson all-wave radio with five valves, and AC and DC mains that could be purchased on terms for nine pounds.

This particular edition devoted more space to the Victoria Girls’ prize giving than it did for its war entire war coverage.

The First World War appears to have had a greater effect on the psyche of Grocott’s readers than the Second World War.

“In the shop window of Messrs Grocott & Sherry are a number of relics and souvenirs of Delville Wood Battle which should be interesting to all observers. These include star shells, a Mills hand grenade, German gas mask and helmet, war histories and maps and photos of South Africans visiting the famous cemetery.”

Many years later, the importance of that significant battle was commemorated in the 23 July 1957 edition observing that “Hundreds of people thronged Church Square yesterday for the Delville Wood commemoration ceremony . . . [and]a service of remembrance for the heroes of Delville Wood was held later in the Cathedral.”

Field Marshall Jan Smuts met the Royal Family when they arrived in Cape Town on board the HMS Vanguard on 17 February 1947. King George VI, Queen Elizabeth, Princess Elizabeth (20) and Princess Margaret (16) were taken directly to the 14-car White Train which was to be their home for two months.

Grocott and Sherry created a pamphlet for the Royal tour in honour of the King’s visit. The 32-page pamphlet highlighted the history of Grahamstown: “ . . . founded in the wilderness as a strategic frontier station and rising in the course of a century, a stately city and one of the great educational centres of the Union” –  Grocott’s Daily Mail, 26 February 1947.

They said that Grahamstown went ‘Royal crazy’ when the Royal party arrived on the 28 February 1947. Grocott’s Daily Mail reported that the town had organised a full day of events for the Royals culminating in a ride in their fleet of specially built Daimlers into Church Square. They waved to the thousands of people who had come to greet them as they made their way to the City Hall for speeches by the King and the Mayor, Mr HA Parry.

King George VI declared: “Your city has a distinguished place in the history of South Africa and I am pleased to hear that you are still proud to call yourselves ‘the Settlers’ city’ in honour of those hardy men and women from the United Kingdom who brought civilisation to this part of South Africa in the early part of last century”.

When William Ellington Grocott passed away in 1935, his two sons, Thomas Hugh and William Vincent took over the firm. They were educated at St Andrew’s College and then went on to gain experience overseas in printing, stationery and books.

All members of the Grocott family, men and women, were involved in the life and improvement of Grahamstown.  They were active in the church, sports clubs, the local Chamber of Commerce, as well as on boards of local banks and were always ready to lend a hand, monetarily and otherwise, to those in trouble.

In 1947 Rhodes University was struggling financially and did not have the funds to pay staff salaries. The University had debts of over 56 thousand pounds and there was a real possibility that it would have to be dissolved. How the Vice Chancellor, Dr Robert Alty, was able to ride out the storm is recounted in Dr R F Currey’s book Rhodes University 1904-1970:

Answering a knock on the front door of the Lodge he found on his doorstep two brothers, Hugh and Vincent Grocott, sons of one of the men whose generosity 45 years earlier had enabled Rhodes to become more than an idea in the minds of a band of enthusiasts. On being shown in, Alty’s visitors explained almost apologetically, that they had heard that Rhodes was in difficulties; and they went on to add that they would like to be allowed to help in any effort which was going to help save the situation. With this brief preface they handed the Master, even more apologetically he felt, a cheque the like of which the Rhodes Accountant had not seen for some time.

We can safely say that Grocott’s Mail saved Rhodes University – currently the biggest, and arguably the most important, entity in Grahamstown.

The provision of adequate water supplies seems to have been a problem all through Grahamstown’s history. In an official meeting on 20 May 1926, held to consider the construction of Howison’s Poort Dam, Mayor MG Godlonton, declared that Grahamstown was the finest residential and educational city in the country, but that ‘…our water supply is a standing disgrace’. He moved that the meeting authorise the raising of a loan not exceeding £110,000 from the Cape Provincial Administration.

Construction was well under way by February 1930 with detailed reports appearing in the Grocott’s Daily Mail. The reports listed  progress including: the placing of a railway siding at Waainek; construction of the pipeline; the electric power line leading from a transformer station near Douglas Dam; reservoirs at Waainek; 3.7m of concrete already thrown into the 17.4 m thick base of the wall above-ground to the reservoir.

Grocott & Sherry Publishers produced a special souvenir pamphlet for the opening of this scheme by the Administrator of the Cape Province, the Hon. JH Conradie on 8 April 1931.

Water was still a big problem 25 years later when a drought in the Grahamstown area caused Grocott’s to print the headline:  City in for a Grim Time… . The article presciently warned that the drought situation was likely to be repeated many times in the future. Water levels had dropped through consumption and evaporation and it was estimated that the town had enough for only another four months. Council instructed the City Engineer to ‘throttle down’ the supply into the pipelines.

The influence of the 1820 Settlers has been a powerful force in the Grahamstown area ever since they arrived in Algoa Bay. For many years, leading citizens had struggled to set up a monument to these intrepid families from Britain and so it was only in 1967 that the Monument’s foundation stones were laid.

To witness the occasion on Settlers’ Day, the editor of East London’s Daily Dispatch, Donald Woods had come to Grahamstown and stayed with a colleague, Thelma Neville. He did however, have ulterior motives for his visit.

Woods told her that his newspaper wanted to take over Grocott’s Mail and that this would be a ‘piece of cake’. He said that the Dispatch was not interested in the paper but in the lucrative advertising revenue.

Woods explained that “They don’t lift a finger to get adverts. They think they are doing the advertisers a favour.”

He went to visit Messrs Grocott and Sherry to present them with his proposal. A short while later, a somewhat surprised Woods returned telling Neville that Hugh Grocott had turned down his offer with contempt. “He just about kicked me out of the shop.”

In an attempt at retribution, the Dispatch started up its own newspaper in Grahamstown, the Albany Mercury. It made no difference, the paper soon folded.

Although Arthur trained to be a printer he did not enjoy being inside and so left the firm.

Jeffrey ‘Jeff’ Grocott joined the business in 1960 and spent three years in London completing his training before returning to the firm.

He became a partner in 1966 on the death of his father, leaving him to run the firm with Hugh Grocott until his uncle’s death in 1980.

In the chapter covering the third fifty years of Grocott’s Mail next week there are massive changes in editorial direction of the newspaper and the way it is published. The newspaper takes on a broader target audience and learns how to be viable on the internet.