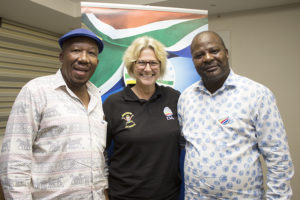 The Democratic Alliance (DA) will show solidarity with the government in its efforts to combat the coronavirus, but the Health MEC in the Eastern Cape must be removed. This was core of the message the party put across in a virtual media conference Monday morning 4 May.

DA leader in the province, Nqaba Bhanga, emphasised that his party would continue to support the efforts of President Cyril Ramaphosa, but would propose a motion to remove Health MEC Sindiswe Gomba from office because she had failed to show the required leadership.

Bhanga said the Eastern Cape government had failed to act decisively in containing the spread of Covid-19 especially when compared to the Western Cape and Gauteng. He said those two provinces put out daily statistics and had regular press briefings about the fight against the disease.

Shadow MEC for Health in the Eastern Cape, Jane Cowley, said daily briefings are necessary to keep track of the latest outbreaks of the coronavirus so that equipment and supplies can be channelled to where they are most needed. She said that regular dissemination of information also ensured public accountability in these difficult times.

Bhanga said the province should introduce a ‘dashboard’ – presumably on a website carrying relevant information – that would be updated in real time so that health officials would always know the status of the fight against the virus.

He said that the province has been so poor at releasing information that even he, as a political leader, did not know where to get tested.

In order to help the province cope with the pandemic, the DA made the following five recommendations:

Bhanga said the province has a serious shortage of Personal Protective Equipment, PPE, which has caused many frontline workers to protest against the dangerous conditions they work in. He also noted that the shortage of testing kits had become a serious problem in some of the districts.

The DA provincial leader urged the Eastern Cape Health Department to speed up the turn-around time after testing. He said results should be ready after a few hours but that in some cases, people had to wait for four days before they knew their status.

The DA supported its case against the poor provincial leadership by pointing out that the national minister, Dr Zweli Mkhize had to intervene in the Eastern Cape when the extent of the chaotic situation in the department became evident. He had to assign a medical team of professionals from the national department to assist in curbing the spread of the virus.

Previous ArticlePlayers keep themselves fit during lockdown
Next Article It’s not rude to keep your social distance: Covid-19 spreads