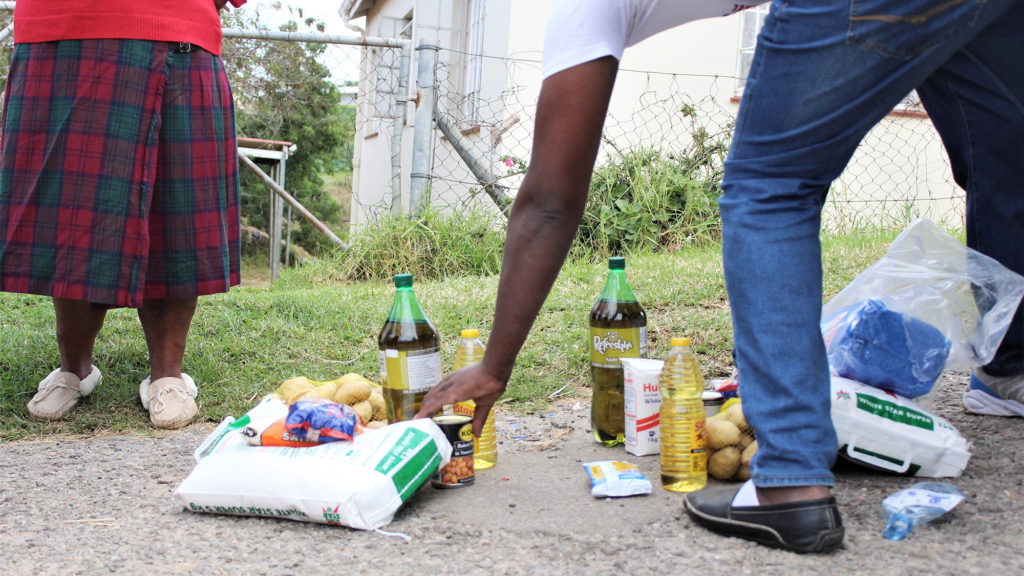 Police provided support for members of the Ethiopian immigrant community who fundraised to put together and distribute food parcels to 300 needy Makhanda families. Photo: Sue Maclennan

‘Not exhausted, elated!’ was how Helen Alfers from the Makhanda Circle of Unity Food Group felt on Wednesday, as she and her team completed the packaging and distribution of 500 parcels to Joza, St Mary’s and Ghost Town, among other locations.

From 120 parcels delivered to schools at the start of the lockdown, the group has mushroomed in both numbers of recipients and in its capacity to help almost 1000 people from starving. The database, which is now closed, includes the elderly and children, as well as 69 car guards.

Initially, compiling the list of recipients was complex and time-consuming, as organisers cross-checked names of citizens with the municipality to try and get a ‘broader picture of vulnerability’, according to Alfers.

The Circle of Unity Food Group is just one of the feeding schemes that will continue to buy, package and deliver food parcels in the weeks to come.

A quick sweep of six of Makhanda’s citizen-led food distribution schemes reveals over 1500 food parcels have been bought, packaged and distributed since the start of the lockdown.

Between these groups and other fundraising efforts, rough calculations show over R360 000 has been raised. Much of it is spent, although a number of schemes have enough in their kitties to meet distribution targets over the coming weeks.

While the Eastern Cape Department of Social Development will access a portion of the national pot of R50 billion emergency funding for food relief, it is unclear when and how the process will unfold.

The continued support of civil society is therefore crucial, according to the department’s provincial spokesperson, Gcobani Maswana.

Nevertheless, Maswana was confident that his department was “winning the war in defeating hunger”.

This prognosis will be tested in the coming days however, as the shadow MEC for Social Development, Edmund van Vuuren, has accused government officials of gross mishandling of the food budget, resulting in a much lower number of food parcels delivered to the needy.

Meanwhile, most of the volunteers we spoke to at the coalface of the food drive in Makhanda describe being inundated by people emailing, texting, calling or pitching up to distribution points where there are simply not enough parcels to go around.

The Unemployed People’s Movement is assisting around 30 child-headed, unemployed and pensioner-headed households a week with food parcels. UPM is requesting more donations be made to its bank account. “My inbox is flooded with requests from people needing assistance,” said te UPM’s Ayanda Kota. Bank details for donations can be found on the organisation’s Facebook page.

Food4Futures is a feeding scheme started by local, Mary Birt, who single-handedly assisted around 50 families in need over the past two years. Since the lockdown began, in order to manage the sharp increase in need for food, Birt teamed up with the Cathedral Feeding Project to access financial support and bring on board volunteers to help buy and package food.

Generous donations have been made to the Cathedral’s bank account. According to Dean Andrew Hunter, since the start of lockdown, 288 vouchers worth R150 were provided, and around 500 food parcels handed out. The team have a further 500 food parcels for the week starting 26 April. Although funds for food vouchers are depleted, the Dean imagines there could be need for at least 50 per day. If you would like to donate, refer to the Cathedral Feeding Scheme bank account details at the end of this article.

Like many others involved in food relief efforts in Makhanda, the Dean welcomed the idea of pooling resources and stressed the need to gather accurate numbers of vulnerable citizens. “I would be very happy to work with other stakeholders to create one database of all Makhanda citizens living below the bread line.’’ 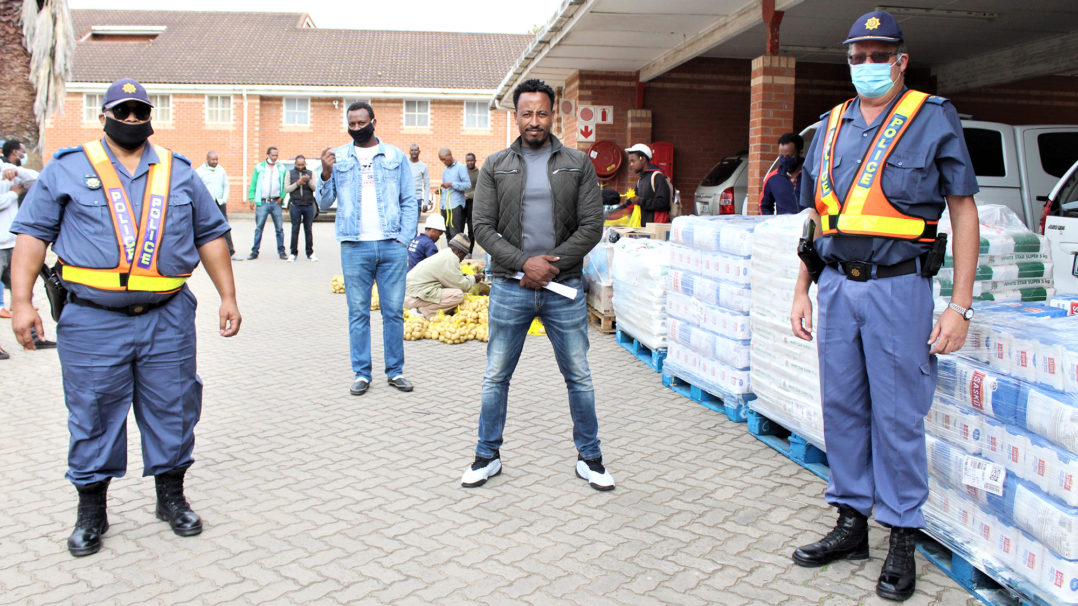 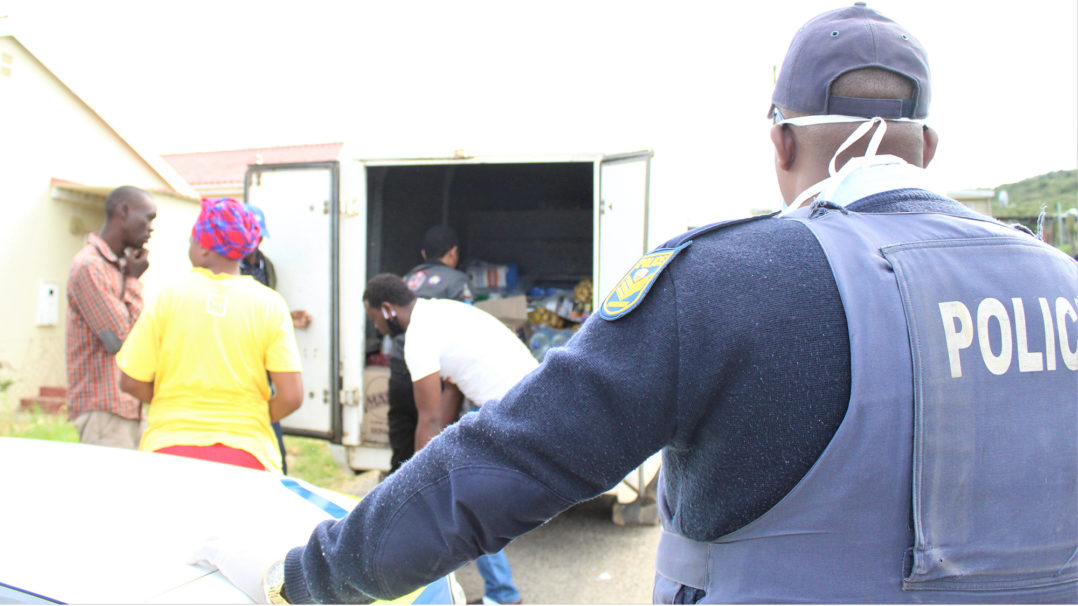 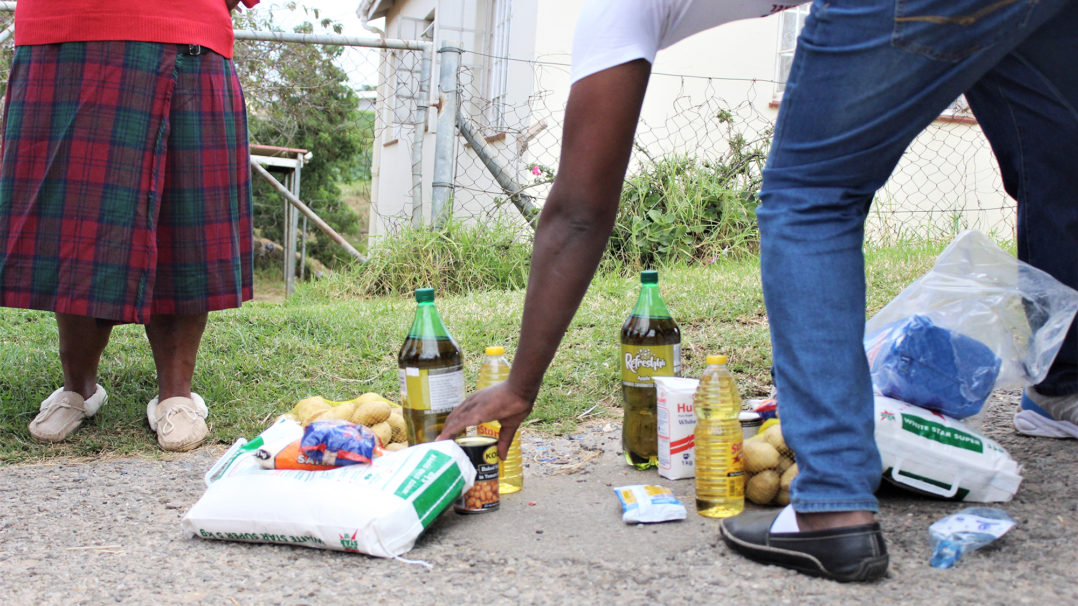 Sustainability is at the heart of the food drives and is why most groups have a cut-off for the number of recipients in their drop-off and distribution lists. Liv Lukhanyiso is one of the ‘pre-Covid19’ organisations serving its existing community partners, including Home of Joy, Child Welfare, Eluxolweni Shelter and Little Flower Pre-school. According to Nomonde Ndlangisato, with fundraising by DSG and St Andrew’s, Liv Lukhanyiso can deliver food parcels to their community partners for the next five weeks.

Farmers in the vicinity of Riebeeck East have made valuable contributions in the form of game meat and pumpkins, said Cary Clark, who is spearheading the town’s food drive. “No problems so far, and one of our community members has made a generous donation anonymously.” With the meat and pumpkins for added nutrition, especially for the elderly, the town has so far met its target of delivering food to 51 households.

If you have been on Facebook, you will have seen a number of initiatives such as the 56km Garden Marathon fundraiser, where locals Sally and Colin Price-Smith substituted the vistas of Cape Town with their back garden to run the Two Oceans marathon.

Grant Mackenzie is another individual who supplies sandwiches and soup to a number of homeless people, many of whom live at the city’s rubbish dump. He no longer drives to the dump, but meets the recipients in town through an agreement with the local SAPS, who provide transport.

Previous ArticleEmergency food relief: how you can help
Next Article COVID-19 response shifts to preserving the economy