No, we haven’t dodged a bullet: we must not drop our guard 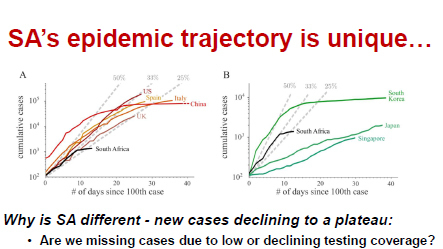 Chair of the Ministerial Advisory Group on Covid-19, Professor Salim Abdool Karim, gave a sobering presentation about the pandemic to the nation on Monday evening. Speaking ‘live’ on national television and on social media, Karim explained why we should not let down our guard even though the number of cases of Covid-19 in South Africa appears to be under control.

He used detailed slides to help explain how rapid action in South Africa had slowed down the spread of the virus, but warned that the country is still likely to experience an exponential  increase in the number of cases and deaths.

Trying to explain why the South African situation is unusual, Karim noted that the initial wave of infections came from overseas visitors, just like in most other countries. The difference is that the anticipated rapid increase brought on by community transmissions of the virus has not yet happened. In other words, the first wave of imported infections was normal, but the second wave of locally transmitted infections was far below that of most other countries.

He stressed that does not mean we have dodged a bullet. It is quite probable that a rapid escalation will still occur in this country, but the regulations imposed by government have gained us time to prepare for what is still to come.

Karim pointed out that several countries including the United States, Italy and Spain have experienced shocking exponential growth rates of Covid-19 cases, but that in South Africa the growth rate was never very high and it already appears to be decreasing.

People have been asking about the unusual trajectory of the epidemic in this country. Are we missing cases because our testing is not good enough, or are there many missing cases in the poorer communities? Ultimately we want to know whether the reductions are real and whether they are due to the government’s interventions.

Karim says the relatively slow spread of the virus in this country is largely due to the decisive actions of government following the advice of top epidemiologists and infectious diseases specialists. President Cyril Ramaphosa announced a lockdown of three weeks that began on March 27, and then extended it by a further two weeks, requiring people to stay home except for those providing essential services.

He notes that drastic measures have slowed down the spread of the disease, but they have also caused widespread unhappiness.Some people believe that the government has overreacted to the virus, while others have said that it is unnecessary to ban the sale of items such as alcohol and cigarettes.

Karim warns that if government eases the rules too early and people become complacent about the virus, there could be an outbreak and a rapid escalation of the pandemic in this country.

He says that if the rate of new cases continues to decrease, it is possible that by next week, some of the restrictions could be relaxed.

Karim was speaking with Health Minister Zweli Mkhize at a virtual meeting hosted in Durban together with  healthcare experts, clinicians, scientists, academics and members of the media.