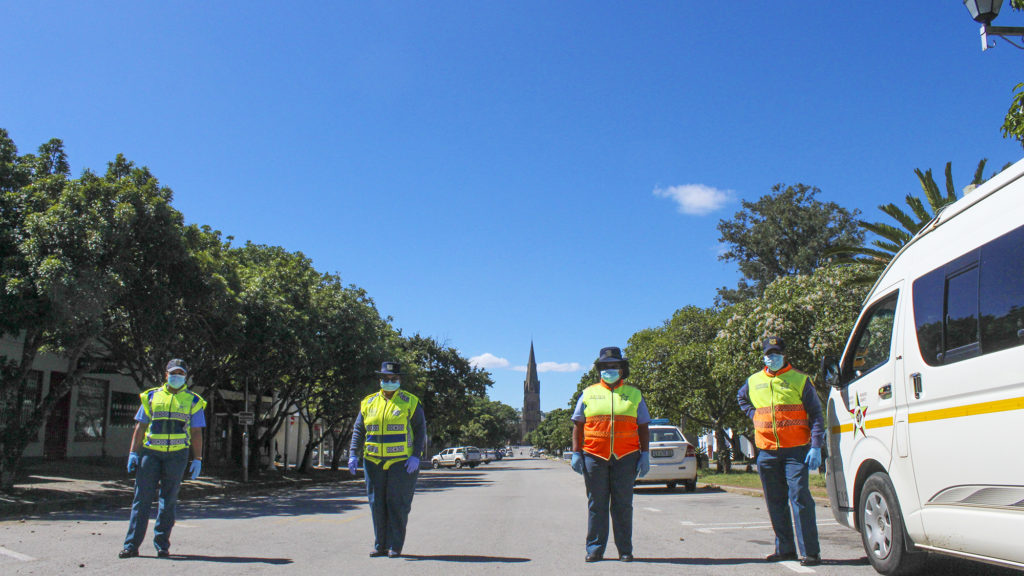 This is how Lockdown Day One looked in Makhanda. Sue Maclennan reports.

Small family groups of two or three walked from Albany Road, over the tracks and along African Street towards Pick n Pay and Checkers. On the other long road to town, the length of Raglan Road from Joza and beyond, families walked behind paid trolley pushers getting their groceries home from them. This was Day One of Lockdown, Friday 27 March.

Some residents found the time restriction on taxis difficult; others wanted more visible enforcement. Law enforcement officers found themselves as busy as ever and now more, as groups of people pushed the lockdown boundaries.

“It’s been a headache,” said one law enforcement official. “There are a lot of people out on the streets who have no reason to be there and there are frequently more than two people in a vehicle.”

Indeed the car playing this music had five people in it:

The national lockdown regulations stipulate not more than two people in a private passenger vehicle, including the driver, on a trip to buy essentials.

“Many people are ignorant,” said the official. “They’re not aware of the lockdown and what it means.

Car guards had been sent home.

There are usually close to 20 car guards in the Checkers area. When Grocott’s Mail reached that section of High Street, police were telling three of them to go home.

Later a group of them had gathered outside the wholesaler in Cobden Street.
“The chased us away,” they told this reporter. “How are we going to make our money?”

“My biggest concern about the lockdown is that there are too many people roaming around,” said Welma Muller of Grahamstown Pharmacy. “We don’t see any traffic officers, army, to keep the people inside.

“The stores have been crazy for the past couple of days so we don’t understand why there are still so many people walking around – we don’t think they’ve come to buy essentials. It’s not good because that’s how the virus can spread. We don’t know what’s happening actually.”

Thembesile and Nonzi Zamani were about half way home, walking up Raglan Road back to Joza, carrying bags of of shopping.

“Shopping is okay,” said Thembesile, who is a pensioner. “The hard part is transport. I think stopping the taxis at 9 doesn’t make sense because it only caters for those who go to work. We are told shops are open – how do we go to the shops if there’s no transport?”

He too was concerned that he hadn’t seen law enforcement under way on his trip to town.

“I walked from Joza to town and I didn’t see any policemen or soldiers. Yet it’s the lockdown. Where are they?”Thembesile asked. People are moving in groups. In Joza, people are drunk and in groups but no one is saying anything about that.

“The first day of monitoring is poor, I can say. It’s almost like a normal day except that there’s a lockdown,” said Thembisile. Also, there is no sanitiser, no masks available in town. We see them being handed out on TV – where are they here?” With concern among recipients an authorities about managing the collection of social grants on Monday, welcome news emerged this week of a partnership between the Rhodes University Pharmacy Department, scientists at Nelson Mandela University and the Department of Health to manufacture hand sanitiser according to the formula provided by the World Health Organisation.

Grocott’s Mail and RMR 89.7 will report further on this.

Whether they’d been too busy to shop ahead of the Thursday midnight deadline, or had wisely avoided the panic-buying queues, Shoppers waited patiently in queues that were much shorter despite the enforced 1.5-metre distance between them.

Grocott’s Mail spoke to Esmeralda and Darian Robertson as they stood in the queue outside Pick n Pay.

“Day One of lockdown is not how it’s supposed to run,” said Esmaralda. “People are scattered around just doing their normal routine days, there’s no control. The Army’s not out. There’s no one asking us, what are we doing, are we shopping.”

“We must just stay at home and be disciplined,” Darian Robertson said. ‘That’s the main thing is discipline.” Grocott’s can confirm that active law enforcement in the form of the South African Police Service and Makana Traffic Department, along with extensive deployment of private security guards was evident across the city.

As is required from law enforcement under the lockdown regulations, this reporter was asked for identification along with a letter of authorisation to carry out an essential service. Journalists, in the category of Communication, are for the purposes of the lockdown deemed essential.

Members of the South African National Defence Force were also out on the streets; however, this was not a deployment but their monthly outing to buy personal items and send money to their families, a member confirmed.

Sizani Mbatshwa, at home with her family in Nompondo Street, works at a small business and not working worries her.

“At the end of the day we’ve got nothing for our children, to feed them. Our bosses can’t pay us because of the lockdown: the clients aren’t coming in so they won’t be able to pay us.”

For Mbatshwa, too, the curb on taxi operations made things difficult.

Marylin Mohamed lives closer to town and the walk to the nearest shop is not far. She found the streets very peaceful.

“Actually today it’s very nice and quiet,” Mohamed said. “To be honest, I like this quietness.”

It was extraordinary for Beaufort Street, all the way up to Makana’s Kop to have so little traffic on the last Friday of the month.

As remarkable was that there was not a person in sight, and no traffic, in the entertainment strip surrounding the Rat and Parrot.

Beyond that, the Rhodes University campus was eerily empty, with Hi-Tec guard Xola Budaza on the corner of South Street the first person to be encountered. Minister of Co-operative Governance Nkosazana Dlamini-Zuma declared a national state of disaster, gazetted on 15 March. The following night, President Cyril Ramaphosa announced the early closure of schools and tertiary institutions along with other measures to slow down the spread of the Coronavirus Covid-19 so that our health services are not overwhelmed. Just over a week later, the President announced more drastic measures under a national lockdown restricting citizens to their homes. On Wednesday 25 March, Dlamini-Zuma signed off the final regulations for the 21-day lockdown in terms of the Disaster Management Act. Regulations include that:

STAY TUNED
RMR89.7 and Grocott’s Mail are bringing you updates and keeping you in touch during lockdown.
@grocotts
www.grocotts.co.za
www.rhodesmusicradio.co.za
Iono.fm/s/70