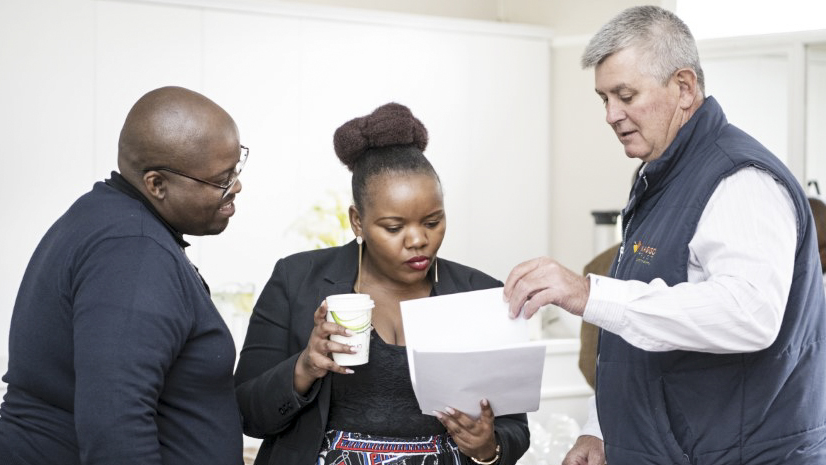 Only authentic discussion among Makhanda’s residents, business owners, officials and councillors will make it possible to take the next step forward in putting technical projects on the ground to create employment and improve the quality of life for people in Makana, says head of Local Government Support at Kagiso Trust, Paul Smith.

Kagiso Trust is a development agency with its origins in the mid-80s, under successive states of emergency. At that time, Kagiso supported existing development initiatives as part of the broad anti-apartheid struggle. Post apartheid, the organisation shifted its focus to developing capacity in education and enterprise.

Today, Makhanda is the national pilot site for a new approach to development that’s based on social cohesion and stakeholder cohesion. We asked Smith how this came about.

Education on its own is not the only vehicle for alleviating poverty, Smith said, and so the trust has four focus areas. The first three are financial independence – the fundraising arm of KT Kagiso Capital; education, including supporting government initiatives around creating better schools; and social enterprise development – supporting emerging businesses, with specific interest in developing emerging black farmers and transforming the property sector.

Spending by government doesn’t change much, Smith said. What’s needed is for a town’s stakeholders to agree on how best to use that money for the development at that time.

“We want to try and make sure we clearly understand what works and what doesn’t work so that we can change [the local government support model]going forward.”

Stakeholder cohesion for the end purpose of development and job creation is Kagiso Trust’s end goal for local government.

“That links our focus on indigent management and local economic development,” Smith said. “If we link the two, we can take unemployed people into the economy.

“We think Makana has a unique disposition with the various stakeholders, the type of economy, and the potential it has in the in the people who live here. And most of all, the will for a better Makana,” Smith said.

“The municipality does have to improve the quality of service delivery – nobody in town disputes that, including senior management and councilors. But not having the resources and maybe even the skills means communities have to step up to the plate.

Smith says the project is about depolarisation.

“We try to get people to set aside their differences and build cohesion around a strategy for development.”

Kagiso Trust worked at Makana Municipality for a year under a revenue enhancement project funded by Co-operative Governance.

“Everybody we spoke to individually was so positive about the potential of the town. And that included the municipality – the officials and the councillors – the business forums and individuals. Everyone we met was also willing to participate in the development of the town.”

Holding things up was what was dubbed “the circular firing squad”.

“We get people to build interpersonal relationships that allow for authentic discussion. It’s only that authentic discussion that’s going to allow us to take the next step forward and putting technical projects on the ground that can create employment and improve the quality of life for people in Makana.”

It’s such discussions that the Circle of Unity – a stakeholder cohesion cluster that includes the municipality, along with individuals and entities as diverse as the Unemployed People’s Movement, politicians, businesses and NGOs – is engaged in.

“I think it must be clearly understood that Kagiso is not here with the silver bullet. What we’re trying to do is facilitate good solid relationships,” Smith said. “We’ve been here for a year and we plan to be here for another two years.

“If things haven’t worked in that time, we’ll go back to the drawing board and try something else. But I think as a country and society, we need to continually think of how to improve our economic status. I think a lot of our communities are under a lot of pressure, and we need to find solutions urgently.”