Mind the toads… you need them! 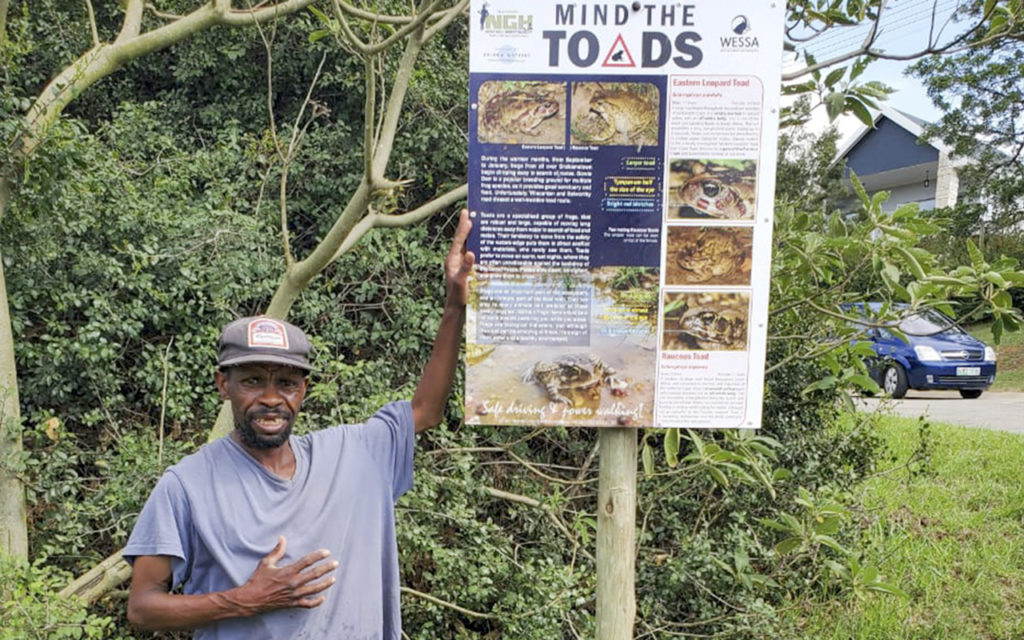 Victor Tulwana stands next to the sign he erected that asks drivers in the Gowie Dam area to watch out for toads. The sign was designed by Ariana Watkins and Chad Keates. Photo supplied

The recent rains have prompted the re-emergence of toads in town. The area around Gowie Dam west of Graeme College is a favourite haunt of the Eastern Leopard Toad and that vocal lover of swimming pools, the Raucous Toad. In an effort to cultivate awareness of these important local residents, herpetologist Chad Keates and designer Ariana Watkins prepared a sign which was sponsored by generous donors and the local branch of WESSA. This sign was put in place at the corner of Wincanton and Taunton Roads by Victor Tulwana.

During the warmer months, from September to January, frogs from all over Grahamstown begin chirping away in search of mates. Gowie Dam is a popular breeding ground for multiple frog species, as it provides good sanctuary and food. Unfortunately, Wincanton and Selworthy road dissect a well-trodden toad route.

Toads are a specialised group of frogs, that are robust and large, capable of moving long distances away from water in search of food and mates. Their tendency to move from the safety of the water’s edge puts them in direct conflict with motorists, who rarely see them. Toads prefer to move on warm, wet nights, where they are often unnoticeable against the backdrop of the tarred roads. Please slow down, be vigilant, and allow them to cross.

Frogs are an important part of the ecosystem, and an integral part of the food web. They are prey to many animals and predator to those pesky ‘miggies’. Without frogs there would be a lot more insects pestering you while you sleep. Frogs are biological indicators, and although their call can be annoying at times, it’s a sign of clean water and a healthy environment.

Eastern Leopard Toad
Sclerophrys pardalis
Male: 110mm
Female: 147mm
A large toad found throughout the southern reaches of the Eastern Cape. It is vividly marked in red and yellow, with an off-white belly, and is one of the most eye-catching toads in South Africa. The call resembles a long, low-pitched snore, lasting up to 2 seconds. Males can sometimes be seen floating in shallow water calling for mates. Closely related to the critically endangered Western Leopard Toad from Cape Town, this toad is a gem of the Eastern Cape and a welcomed resident to our town.

Raucous Toad
Sclerophrys capensis
Male: 65mm
Female: 115mm
A medium to large toad found throughout South Africa, with exception to the hot, arid expanses of the Northern Cape. It has a brownish yellow back with irregular blotches and an off-white belly. The call resembles a low-pitched duck-like quack and is easily identifiable. Males can sometimes be seen floating in shallow water calling for mates. Although not as colourful as the Eastern Leopard Toad, it is incredibly widespread and the most commonly encountered of the two species.