Poaching trial to resume in May 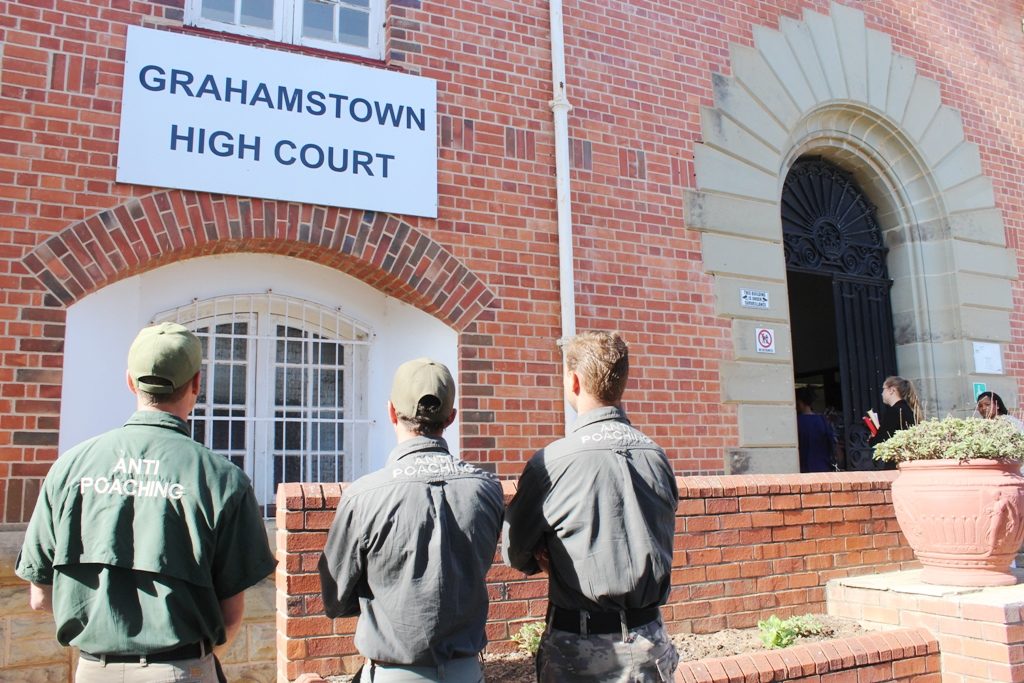 Members of the Lalibela reserve anti-pooaching unit poose for a photo outside the High Court in Makhanda (Grahamstown) ahead of the sentencing of the Ndlovu rhino-poaching gang on 3 April 2019. Photo: Sue Maclennan

The trial of six men facing rhino-poaching charges continued in the Grahamstown High Court this week. East London residents Francis Chitiyo, Trymore Chauke, Misheck Chauke, Simba Masinge and Nhamo Muyambo, and  Abraham Moyane were arrested in July 2018 during Operation Full Moon – the Eastern Cape Rhino Task Team’s code name for its anti-poaching operations. All six have since been in custody. They are accused on four counts. The first two fall under the riotous assemblies act – statutory conspiracy to commit a restricted activity involving rhinoceros, and conspiracy to steal rhino horn. The second two counts are under the Firearms Control Act.

The men were arrested 10km outside Makhanda, following a search operation. A dismantled hunting rifle, wrapped in black plastic bags, was found stashed in the tailgate of one of two vehicles they were travelling in. Knives, backpacks containing overalls and shoes, 10 cellphones and yellow-handled axes, along with receipts for the axes, were found in the men’s possession.

Over several days, chief witness Captain Mornay Viljoen gave detailed evidence based on the cellphone records in support of the State’s case that seeks to link the men to rhino-poaching incidents in Cradock, Kabega Park in Port Elizabeth and Alicedale. Viljoen is head of the Jeffreys Bay based Stock Theft and Endangered Species Unit.

This week, defence for the men questioned Viljoen’s grounds for the arrest, and stated that two of the suspects were on their way to work in the Port Elizabeth area. The defence also averred that Muyambo had been at home in Zimbabwe during the period in question. The State questioned alleged discrepancies between the stamps in his passport and data from Home Affairs.

Through his lawyer Advocate Charles Stamper, Muyambo also maintained that he had bought a phone from a second-hand shop with a sim card inside it.

An axe bought at a shop in East London by the accused just two days after his arrival, his lawyer was instructed, was for his father back in Zimbabwe. It was much cheaper to buy an axe in South Africa.

Senior State Prosecutor Buks Coetzee Thursday concluded his cross-examination of Chitiyo about his cellphone records and his whereabouts during the periods in question.

The trial will resume on 11 May and is set down to conclude by 29 May.