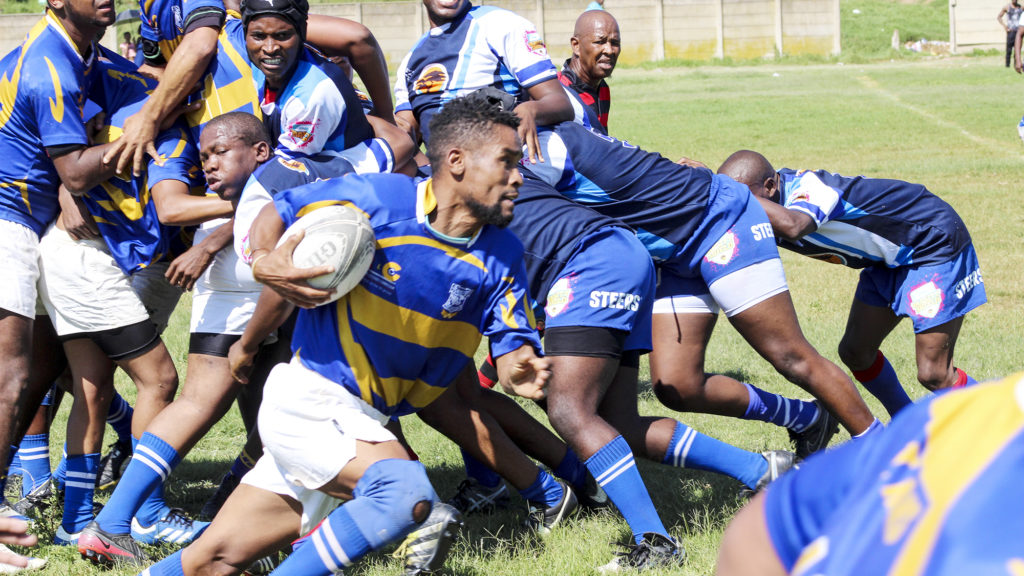 St Marks scrumhalf Franklin Sias takes a blindside break during their match against Old Collegians in the Gold Cup qualifier at the Oval on Saturday 7 March. Photo: Sue Maclennan
The start of the South African Rugby Union (SARU) Gold Cup Knockout Tournament last weekend saw a lot of surprises and a few upsets, as mistakes led to unexpected losses.
The Oval Ground in Makhanda was the venue for the Sedru teams competing. Old Collegians (OC) opened the day’s proceedings against St Mark’s from Alicedale in a thrilling encounter. The game was scrappy to begin with, as both teams made too many enforced errors. OC, who are known for their running rugby, took the game to the visitors, throwing the ball around and keeping it away from the St Mark’s forwards. Siyabonga Mahapi slotted two first-half penalties to give OC a 6-0 lead at halftime.
The second half saw St Mark’s playing more as a unit, keeping the ball with their big mobile forwards. They started dominating matters up front and gained territory.
The visitors were unlucky to received a red card halfway through the second half and were down to 14 men. They nevertheless scored two tries, as did OC. The visitors didn’t play to their full potential and could have scored more points. OC on the other hand, made use of their opportunities and capitalised on the visitors’ mistakes. With the score on 16-12 to OC, the game was still on as St Marks dominated territory and play most of the rugby inside OC half. St Marks could have scored the winner close to the end of the match but made handling errors that prevent them from scoring. Full credit to OC, who defended well in the end and kept their 16-12 lead, which was also the final score.
In the main game of the afternoon, Sedru Champs Lily White proved too strong for Klipfontein. Blues took a 10-0 lead at halftime and went on to secure a dominant 36-7 win. The visitors also made many mistakes and their defence was not up to standard. Lily White put the visitors under a lot of pressure on attack. Their backs were in full command of play at the back. Blues scored three further second half tries and registered a deserved win in the end.
Brumbies traveled to Addo and were unlucky to loose 17-20 in a dramatic and controversial finish to the game. Alderonians clinched the winner at the death in injury time and choked the young Brumbies side.
Previous ArticleGrasp the pineapple… seize the night!
Next Article If Masicule! can work so well, surely Makhanda can!