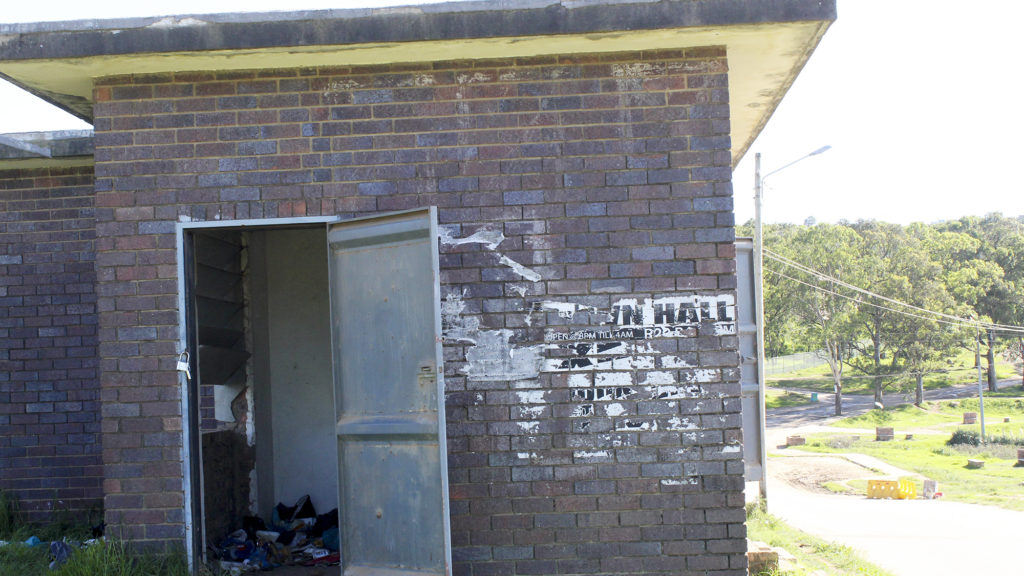 Residents living near the Currie Street electrical substation say cable theft is a problem in the area. Emergency staff found two men inside it after an explosion around 5pm Tuesday 3 March. Photo: Sue Maclennan

By SUE MACLENNAN and CHESLEY DANIELS

A man was rushed to Livingstone Hospital in Port Elizabeth after being rescued from a cable shaft inside the Currie Street, Makhanda, electrical substation around 5pm on Tuesday 3 March. Emergency Services were alerted to the man’s plight when they responded to a loud explosion at the substation. The man’s companion was questioned by police.

Spokesperson for the Eastern Cape Department of Health Sizwe Kupelo confirmed that paramedics from the Department’s Emergency Medical Services had attended to the victim after removing him from inside the substation shortly after 5pm on Tuesday 3 March.

“Paramedics had to call an electrician to ensure the safety of the victim as well as emergency personnel,” Kupelo told Grocott’s Mail. The man had been rushed to Livingstone Provincial Hospital in Port Elizabeth for treatment for severe burns.

When Grocott’s Mail visited the site on Wednesday morning, Makana Municipality staff were in attendance. In addition to electrical repairs, they were replacing ventilation slats that had been removed.

Grocott’s Mail understands that the ventilation slats are essential to prevent substations from overheating, but also make them vulnerable to break-ins.

In addition to the catastrophic substation break-in, repeated cable theft in the area is a serious problem.

Grocott’s Mail was shown street lights from which cables had been removed (see photographs), affecting street lights as well as the floodlights at the nearby Oval rugby stadium.

Mary Waters Secondary School, 200 metres from the substation, was without electricity for several days as a result of both cable theft and a damaged electricity pole outside the school. When Grocott’s Mail visited the school on Wednesday, Makana electricians were working on the lines and by midday, Principal Faith Coetzee reported that power had been restored to the school.

“It was a nightmare,” Coetzee said of the previous week. “We had assessment tests to administer and downloads from the Department to download.”

So that the school’s programmes could continue, they had moved their photocopier to a nearby school, and Coetzee had bought a dongle and data, so they could download tests and tasks.

According to local residents, the men who were found inside the substation are originally from the area and are well known to locals, but currently live in Extension 9.

“They said they were going in there to smoke,” said one resident who spoke on condition of anonymity. “Apparently the guy was trapped in that hole for an hour before he was spotted there.”

Another, also speaking on condition he wasn’t named, said he was among a number of residents in the area who had been asking the municipality to fence off the substation to prevent loitering there.

“There are a lot of drug users who hang around in the area,” the resident said. “They steal cables to sell for scrap metal when they get desperate to buy drugs.”

Police spokesperson Captain Khaya Tonjeni said no arrests had been made in connection with yesterday’s incident.

“We are waiting for Makana to open a case docket of Tampering with Infrastructure and arrests will follow,” Tonjeni said on Wednesday morning.

Grocott’s Mail had not yet received a response to a request for comment from Makana Municipality at the time of publishing and we will include their reply when we receive it.