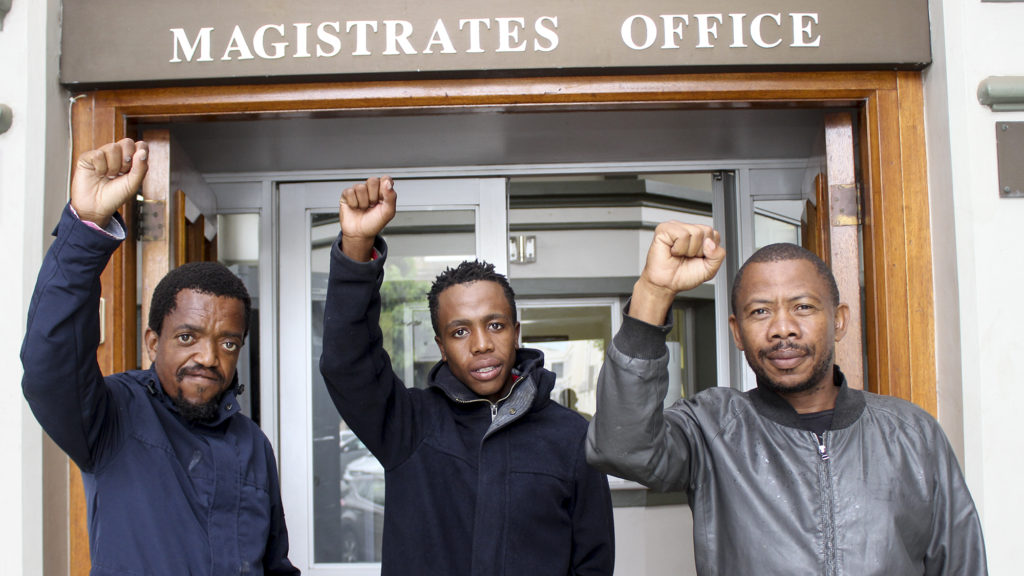 The UPM's Mziyanda Bulani, Sikhumbuzo Soxujwa and Ayanda Kota outside the Magistrates Court in Makhanda on Tuesday 18 February. lawyers for the UPM today filed an application to have the judgment against Makana Municpality enacted. Photo: Sue Maclennan

Within hours of Judge Stretch ordering the Eastern Cape executive to dissolve the Makana Council and place the municipality under administration, the ANC’s regional leadership said they would encourage the Provincial respondents to appeal the ruling. Premier Oscar Mabuyane later confirmed that the Province would appeal the groundbreaking judgment.

Spokesperson for the Premier, Mvusiwekhaya Sicwetsha, said that the State Attorney had advised that the application for leave to appeal would be heard, subject to confirmation from UPM’s attorneys, on 21 February 2020 in Bhisho. Attorney for the UPM Brin Brody, told Grocott’s Mail the application would be heard in the Grahamstown High Court on 3 and 4 March.

Meanwhile Wheeldon Rushmere and Cole on Tuesday 18 February filed the Section 18 application on behalf of the Unemployed People’s Movement. Brody said the application was on the basis that the order must operate for the duration of the State’s appeal, because of the very serious allegations of urgency in the papers.

In the founding affidavit for the Section 18 application, the UPM’s Ayanda asks the Court “to order the implementation and execution of the [14 January] judgment… pending a decision in respect of leave to appeal or pending an appeal to a higher Court”.

Section 18(1) of the Superior Courts Act says the carrying out of a decision that is the subject either of an appeal or an application for leave to appeal is suspended pending the decision of the appeal or application, unless there are exceptional circumstances.

The UPM argues that there are exceptional circumstances.

“Those exceptional circumstances are that nothing has improved,” Brody told Grocott’s Mail earlier this week.

In the court papers, Kota refers to the infrastructural, financial and administrative crises listed in the original application.

Among the crises Kota cites is the municipality’s failure to manage the landfill, allowing it to routinely and regularly catch fire.

“From the lived experience of members of the UPM and citizens of Makana, nothing has changed since [the last intervention in]May 2019 except that the situation of crisis and collapse facing the residents of the municipality has deteriorated.”

The papers cite scores of incidents of sewage leaks recorded through the reporting app Mobisam, along with documents showing the municipality’s failure to act on upgrading the Belmont Waste Water Treatment Works following recommendations made  by engineering firm MBB Consulting in 2011 and 2014..

At the end of a 117-page judgment, the Judge’s two-page order said Makana had failed to provide services to the community in a sustainable manner, promote a safe and healthy environment, structure and manage its administration, budgeting and planning processes, prioritise the community’s needs and promote its social and economic development. Makana Municipality had breached sections 152(1) and 153(a) of the Constitution and was therefore declared invalid.

And she ordered the Province to “forthwith” dissolve the Council, appoint an administrator until a new Council is elected and approve a temporary budget to keep Makana Municipality functional.

The provincial respondents’ papers applying for leave to appeal argue in detail about the definitions and purposes of various sections of the Constitution and the Municipal Finance Management Act, as well as the various types of intervention that have been carried out in the municipality. They argue that either these were incorrectly referenced by the applicants, or incorrectly applied.