‘Councillors should step down’ – United Front 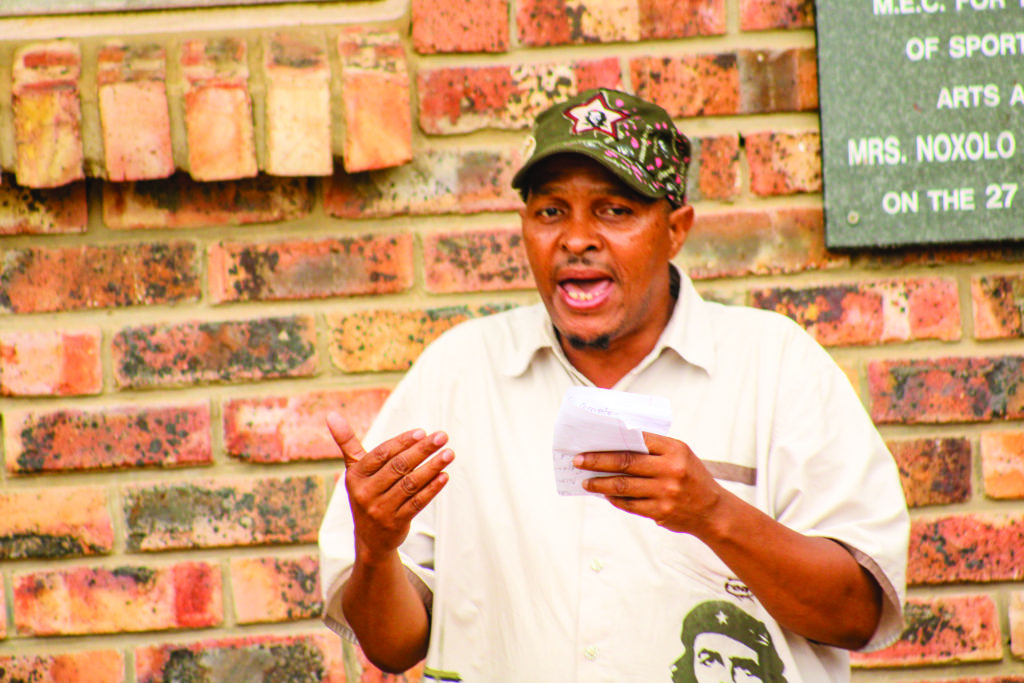 By SUE MACLENNAN and AZLAN MAKALIMA

The Unemployed People’s Movement is considering contempt of court proceedings against the Premier and his co-respondents following their failure to execute the 14 January High Court order to dissolve the Makana Council and put the municipality under administration. Lawyers for the four provincial respondents have countered with an application for leave to appeal Judge Igna Stretch’s ruling. Meanwhile, the United Front says it’s unacceptable for councillors to remain in office after the ruling. The organisation has vowed to march to the city hall, remove the Council and put in an administrator.

The ruling handed down in the high court in Makhanda on 14 January 2020 declared Makana Municipality non-functional in terms of administrative functioning and service delivery and therefore invalid. In documents dated 31 January, the provincial respondents filed their application to appeal either to the Supreme Court of Appeal or a Full Bench of the High Court “against the whole of [Judge Stretch’s] judgment and paragraphs A, C, D and E of the order handed down by the judge.

A letter to the Province’s lawyers from the UPM’s lawyer Brin Brody, also dated 31 January 2020, encloses a copy of Judge Stretch’s order and notes simply, “You will note that in terms of that order your clients were required to do that which was ordered forthwith. To date your clients have not done so and our clients are now considering proceeding with contempt of court proceedings against your clients.”

READ THE FULL JUDGMENT IN THE STORY BELOW
(Once you’ve opened the article, click on each of the images at the bottom to access parts 1, 2 and 3 of the judgment).

The judgment orders the Provincial Executive to “forthwith dissolve the Municipal Council of Makana Municipality…, to appoint an administrator until a newly elected municipal council has been declared elected, and to approve a temporary budget or revenue raisin measures or any other measures intended to give effect to the aforesaid recovery plan to provide for the continued functionality of Makana Municipality.”

The first four respondents in the UPM’s successful High Court application are the Eastern Cape Premier, the Provincial Executive, the MEC for Co-operative Governance and Traditional Affairs and the MEC for Treasury, Economic Development and Tourism.

During argument in the September 2019 hearing, lawyers for the government respondents (there were 15 in total including the President) argued in great detail about the purpose and interpretation of various acts invoked in the UPM’s case.

The application for leave to appeal similarly argues about the intended meaning of sections of the Constitution and the Municipal Finance Management Act. It argues that some of the remedies prescribed by the Judge under various sections of both the Constitution and the MFMA are incompatible. It argues about the correctness of references to previous terms of partial administration in the municipality, and former Section 139(5) intervention and financial recovery plan.

“According to the Provincial Executive the key objective of developing a holistic plan which meets section 142 of the MFMA was indeed achieved in 2015,” lawyers for the provincial respondents say in their papers. “All that needs to be done is for the Administrator which is no longer in office, and the Municipal Manager to forward an updated or revised draft to Provincial Treasury and Cogta, with a copy to the National Treasury’s Municipal Finance Recovery Service.”

Attorneys for the Premier, Province, Cogta and MEC for Finance are Whitesides.

Meanwhile, this week United Front Provincial Executive member Lungile Mxube said it is very urgent that the province dissolves the council and strongly believes the municipality is delaying the process.

Addressing Ward 10 residents outside Fingo Library Hall on Wednesday 5 February, Mxube said the municipality should not be allowed to continue with their appeal from inside the City Hall, not while they’re still in office. He believes the municipality is delaying the process and that it’s urgent that the Province dissolves the Council.

The meeting was held to explain the court ruling to residents and what it means for the municipality. Mxube said residents would march to the City Hall on Thursday 13 March in order to close down the municipal offices, remove the council and put in an administrator.

The United Front was established as a political lobby group in 2013 after Cosatu expelled its general secretary Zwelinzima Vavi. According to their website, their goals include “to forge unity, solidarity and action of a broad mass of oppressed and exploited people in South Africa behind a common banner of sustained mass struggles and action… around immediate popular demands for social, gender, economic, political and ecological justice”.

They won a single seat in Nelson Mandela Bay in the 2016 local government elections and in October last year were vocal against the removal of Mayor Mongameli Bobani, of the UDM.

Previous ArticlePirates fight their way up
Next Article Get your kicks here!