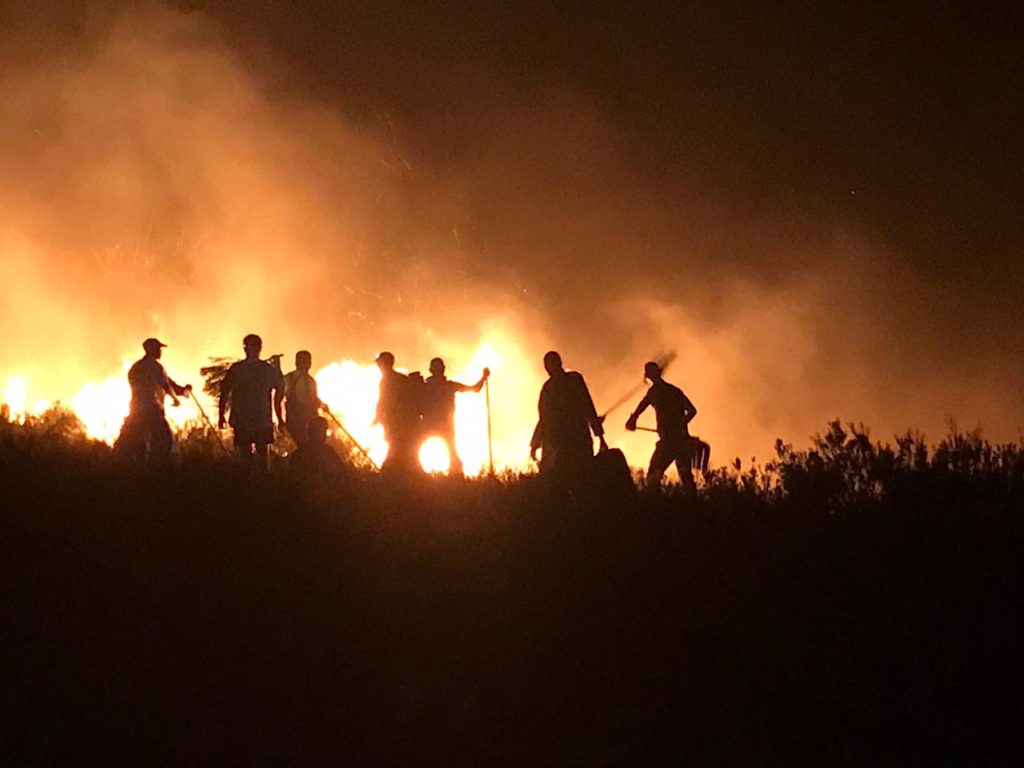 While extraordinary weather on Tuesday and Wednesday nights brought welcome rain to town, the lightning storm started a fire that destroyed grazing as well as tens of thousands of rands worth of fencing at the Hoole family farm, Mitford Park, outside Riebeeck East.

The lightning struck on the mountain some time on Tuesday night and because the family and staff were indoors, it was only much later they noticed it.

“Besides the veld, there’s a lot of fencing that’s been destroyed,” Bryan Hoole told Grocott’s Mail the next day. Replacing that would cost tens of thousands of rands, he said.

“We had to moved our livestock to safety in the dark,” Bryan said. “I suppose it was quite frightening,” he admitted. “A lot of people who came to help were as scared as hell – but a lot of us have had this experience before.”

Neighbours came in their numbers to help, along with the Makana Fire Services.

Makana Fire Station Commander Vuyokazi Sam confirmed a crew from Makhanda had gone out to the farm in a landcruiser late on Tuesday night. They were supported by a crew of two from Alicedale.

“At the moment there are still some hotspots and we have sent another crew to try and tackle those before it gets dark,” Sam told Grocott’s Mail on Wednesday afternoon.

“What’s made it difficult is that the area is not easily accessible.”

The crew’s brief was to prevent the fire spreading to neighbouring areas and prevent damage to buildings and equipment.

Grocott’s Mail tried unsuccessfully to speak to ward councillor for the area Ntombekhaya Peters; however, Riebeeck East resident and PR councilor in Makana Cary Clark expressed gratitude to the fire fighters and neighbours who assisted. She said the fact that the fire services have to come all the way from Makhanda means their response time is longer than 30 minutes for a fire in Riebeeck East. In the case of Mitford Park, which is along a rough dirt road beyond the village, Clark said, the response time had been more than an hour.

“This is why I continuously fight for our satellite fire station which has finally been approved by the Sarah Baartman District Municipality,” Clark said. “I just hope we get it quickly before any more fires. The community in Riebeeck are awesome and at a moments notice are willing to assist. Without them we would be in serious trouble. Thanks also to the fire fighters who are still also on the scene,” she said on Wednesday.

The rain did come to Riebeeck East.

“This morning there was 30mm in the gauge,” Hoole said last night. “Plus by now there must be at least another five to 8mm.”

“If you’d asked me yesterday what that meant for us I would have said ‘nothing’,” Hoole said. “But now that we’ve had this follow-up rain, we’re smiling.

“The grass is growing – thank goodness because we’ve just lost four grazing camps in the fire – and things are looking up. Another four to six months of this will see us through winter and then hopefully we’ll get the spring rains.

“But you never know – and that’s how it is when you live with nature.”