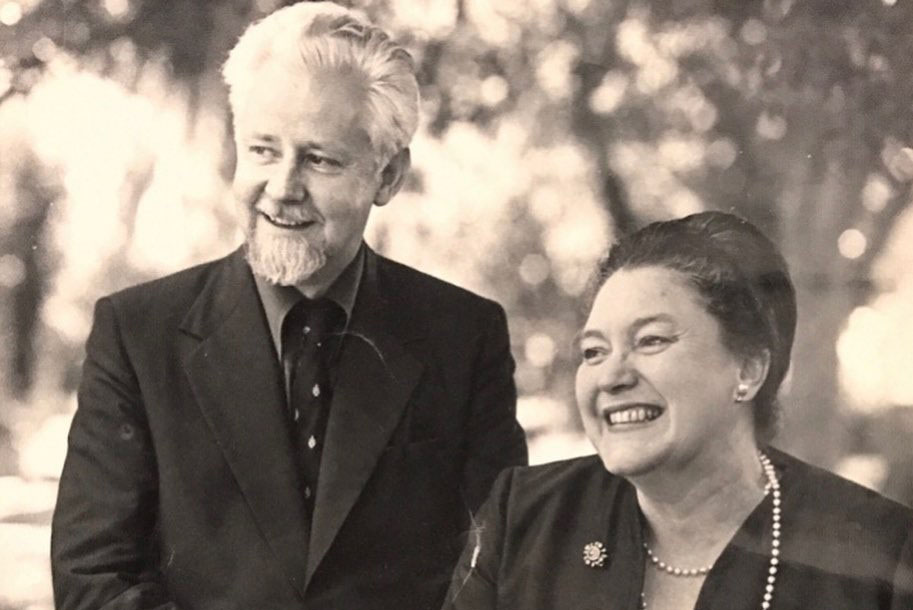 Jean Branford, South African lexicographer and linguist was born in East London (South Africa) on 18 June 1931, and died peacefully on her farm, Pieterkoen, in George on Tuesday 8 October.

Branford was the daughter of distinguished historian and author, Alfred Gordon-Brown. She grew up in Cape Town and obtained a BA from the University of Cape Town, graduating with distinction and the class medal in Classical Culture. She married her English tutor, William Branford, in 1952. Bill, as he was affectionately known, went on to become Professor of Linguistics and English Language at Rhodes University, Grahamstown. Jean Branford’s love affair with South African English began in 1949, during her first week on campus at the University of Cape Town. She once described her experience: “When set my first language assignment for English 1, which was to write up and comment on x items of South African English observed, I was hooked – and still am.”

Branford went on to do a PhD in dialect lexicography and subsequently published A Dictionary of South African English with Oxford University Press. The ground-breaking book ran into four editions, the first of which sold out in less than a year and received several “bestseller” commendations.

The Dictionary’s Preface summed it up perfectly. “This is not a conventional dictionary. It deals with an unconventional part of the English vocabulary, namely that peculiar to or originating in South Africa, and it treats that part in a manner which is not strictly orthodox. It has been designed with that dual purpose which Horace ascribes to poets in his Ars Poetica:

Aut prodesse …aut declare
‘Either to instruct or to delight.’

“In this case it is my earnest hope that it will do both. Like all dictionaries, it is intended to be useful; but unlike many, it is intended also to give pleasure and amusement.”

The pleasure and amusement came from the illustrative quotations, a special feature of the dictionary, taken from multiple sources from South African authors ranging from Lady Anne Barnard, Athol Fugard and Nelson Mandela, to daily conversations, newspapers and letters. Branford wrote, ”I have had the good fortune to be treating some of the most expressive language possible and have had access to what must surely be a uniquely varied body of source material. From this have been chosen for their utility, validity or pure pleasure, the quotations, which are the spirit of this text.” Branford would cull her quotations from various sources. She would watch local TV “soapies”, scour newspapers and magazines and listen to people around her. She was known to carry a little notebook with her into which she would scribble illustrative sentences from people around her, even in the supermarket queue.

What they were forgetting was that a dictionary records what people use, not what they ought or not to use.

These lovingly selected illustrative quotations provide a rich and unique picture of South African life – from food, drink, flora and fauna, to the most deeply controversial and searing political and social lexicon of South Africa at the time.

At the time, there were some who were shocked at the fact that some of the entries featured vulgarisms or politically incorrect or insulting terms. But what they were forgetting was that a dictionary records what people use, not what they ought or not to use, and what they failed to notice was that those entries were accompanied by status labels such as ‘offensive’ or ‘objectionable’. (One cannot but help recalling the response of the famous English lexicographer, Dr Johnson, when someone accosted him with the accusation: ‘I am sorry to see, Dr Johnson, that there are a few naughty words in your dictionary.’ To which he retorted: ‘So, madam, you have been looking for them?’)

The fourth and final edition, co-written with her husband, Professor William Branford and published in 1991, reflected the beginning of a new era in the country. State President FW de Klerk, deputy-president of the African National Congress, Nelson Mandela and Inkatha Freedom Party leader Mangosuthu Buthelezi met for peace talks in January, and in February de Klerk signed a national peace accord promising to end all apartheid legislation and to create a new multi-racial Constitution.

Commenting on the prevailing charged atmosphere, Jean Branford wrote in its introduction: “Revising a dictionary of terms current in South Africa in this year of grace, 1991, has been a bewildering task. The vocabulary, unsettled, flew about us like a cloud of buzzing, angry insects, most of them with the potential to settle and join the mixed swarm, or to swim off into the ether perhaps never to be seen or heard again…”

In referring to the far-reaching changes in South Africa since the third edition of the Dictionary was published, Branford said, “Unbannings of people and the relative freedom today of speech and publication (as compared with 1987) have released, as it were, a multitude of new or silenced voices, a wealth of ‘new material, much of it from as far back as the 1950s, and of new perspectives on older things.’ The work undoubtedly provides some fascinating insights into that critical period in South Africa’s turbulent history.

“It teams therefore with words, ideas, structures and concepts from many languages and many cultures, and if my sample collection of these illustrates this fact, it will fulfil the function which I have envisaged for it.”

The fact that we now had a dictionary of our English meant that we could use our local dialect with pride.

It can be argued that Branford’s dictionary was one of the major factors which led to the acceptance of South African English as one of the World Englishes. Australians, Americans, Canadians and others had long accepted that their English was not just an inferior version of British English, but South Africans lagged behind in this respect.

The fact that we now had a dictionary of our English meant that we could use our local dialect with pride.

The Dictionary Unit for South African English was founded in 1969 by Branford’s husband, Professor William Branford, as a project of the Institute for the Study of English in Africa at Rhodes University. The Unit’s objective was to collect and record English as it is used in South Africa and is today a non-profit company and affiliated Institute of Rhodes University, responsible for the publication of a number of definitive texts on South African English.

In addition to her own dictionary, Branford was also the author of numerous papers, as well as some poetry, and verse translations in both English and Afrikaans. Her other academic interests included dialect generally, Anglo-Saxon literature, Ancient Greek, translation, phonetics, and the Japanese language and people.

Branford always maintained there had been an over-emphasis on loan words in studies of South African English (SAE), and too little awareness of SAE items which are English but used differently from elsewhere. She had always hoped to publish something on this neglected aspect, so when health challenges prevented this, she turned to her former student and friend, Dr Malcolm Venter, to write the book – Say it Again? for her.

Venter, who founded the National English Olympiad in South Africa and is currently National Chair of the SA Council for English Education, had completed his Master’s and his doctorate, both in Linguistics, with Jean’s late husband, Professor William (Bill) Branford. In describing how the book was written Venter says, “I had always been interested in SAE … I did not, however, “take over” completely. Jean’s handwritten index cards (sometimes almost illegible) provided a sound basis for the work; then Jean and I explored further items and searched for more citations; and finally, I wrote the text under Jean’s critical eye.

“The subtitle, ‘The Other Side of South African English’ reflects the thrust of the book – a focus on the English elements of SAE, while the title itself (Say it Again?) is an example of this.”

Like her first Dictionary, Branford was far from conventional or orthodox, and her free-spirited and rebellious approach to life’s rules and regulations was legendary. Known affectionately by her family as “The Arbiter of Good Taste”, she never missed an opportunity to let any unsuspecting victim know how things really should be done, how a word really should be pronounced and what really was the right course of action in any given situation.

While at Rhodes University, Branford played host to Bill’s students during their Honours Year and after their graduations, where she plied them with great food and drink and was the life and soul of the party alongside her more demure husband. She also had a beautiful rich singing voice, and often sang at her parties, along with students and friends.

Of note was Branford’s incredibly close and loving relationship with Bill, her husband and soulmate, with whom she collaborated closely throughout their academic and literary careers. She was also a warm and engaging friend, generous host and spirited raconteur with a scathing wit.

However, despite her formidable intellect and academic achievement, Branford also had a great love of “ordinary things: “cooking, dogs, flowers, our old farmhouse near George and folksong (and altering houses – I never see one without redesigning it or restoring it in my mind)”.

Jean Branford leaves two children – her daughter Penny, who lives in the UK outside Guildford, and her son Justin, who lives in George.