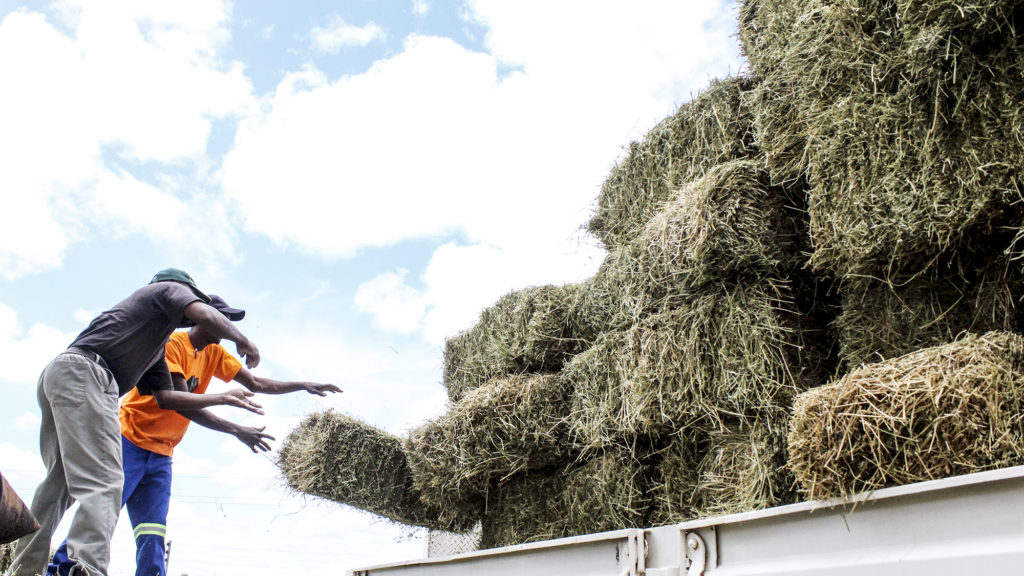 Lucerne is loaded on to a truck in Makhanda on Monday 27 January. More than 100 tons of animal feed was brought for 64 farmers in the area, from the Department of Agriculture. Photo: Sue Maclennan

Around 85 tons of animal feed and several truckloads of lucerne arrived in Makhanda this week as drought-relief aid for 64 farmers in the area.

While the town and surrounding farms have enjoyed significant rainfall this month and there is now good grazing, farmers nevertheless welcomed the supplies and lined up in mud-painted bakkies at the old golf course to load up maize, lucerne pellets and molasses meal. At the other side of town, at the State Vet, members of the Makana Emerging Farmers Association were likewise presenting their branding certificates and ID documents to have allocations of lucerne bales loaded up on a truck for delivery to their farms.

Farmers queued for the deliveries from the Department of Agriculture, Land Reform and Rural Development from early Monday 27 January. One of two huge interlink trucks bringing the drought relief supplies was delayed. Ironically, it was stuck in mud after recent good rains here and had to be towed out. The driver of the Mpumalanga-registered truck had taken a wrong turn into Burnt Kraal instead of the old golf course two kilometres further towards town.

“We applied for this in January 2018,” one farmer told Grocott’s Mail. “We were desperate for this assistance then. But we’re still grateful to be getting something.”

Senior manager for resource planning in the Department, Thembani Nyokana, explained to Grocott’s Mail that the Eastern Cape had been allocated R74 million in drought-relief funding.

Of that, the share for Sarah Baartman District Municipality and Nelson Mandela Metro was R15m for the 2018/ 2019 financial year. This was for both commercial and smallholder (emerging) farmers and 1161 in total had applied. Of these, 64 were from Makana.

“Drought relief supplies were delivered,” Nyokana said. “But the service provider couldn’t complete their contract before the start of the new financial year (March 2019), so we applied for R4.7 million to be rolled over for the next financial year.

A new call for applications was invited that closed on 22 November 2019 and in December (last month), supplies were delivered.

“But it was of poor quality, some of it rotten,” Nyokana said. “We rejected it and the suppliers replaced it.”

Farm managers Jan Smit and Awonke Moltina, were at the old golf course to collect Lucerne pellets and mielies for  Koedoevale near Fort Brown.

“The application was in January 2018,” Smit said. “Unfortunately since then we’ve lost five or six cattle and several goats.”

Bantwini Mani lives on a smallholding in Riebeeck East and grazes goats, sheep and cattle on the commonage. He’d been to collect the sub-standard supplies in December.

“That time it was very poor quality maize,” he said. “This time it’s much better.

“We were desperate when we applied,” Mani said. “At least now with the rains, there’s grazing and water. But still, this helps.”

“We applied in 2018,” Bill said. “Things are a bit better now after the rain, but then it was very difficult.”

He said water remained a problem, however.
There are boreholes, but they need to be rehabilitated. I think there is something stuck in them,” he said. “Gift of the Givers was delivering to us during that chaos with the municipality.

The farm has dams, but they’re silted up and need to be scooped out.

Humansdorp Co-op won the tender to supply the mielie meal, molasses meal and lucerne pellets. Speaking at the old golf course handover site, Manager Brad Labuschagne said they’d brought the supplies in 50kg bags: 882 bags of maize; 872 of lucerne pellets and 856 of molasses meal, totalling  around 85 tons. Two interlinks and a truck had brought the feed.

On the other side of town, at the state vet on the Port Alfred road, Chairperson of the Makana Emerging Farmers Association Gcobani Dyantyi was assisting officials with the logistics for hundreds of bales of lucerne. The supplies were for both commonage and commercial farmers.

“This aid is very important for us,” Dyantyi said.

He said in April 2018 former MEC for Agriculture Mlibo Qoboshiyane had motivated for the Makana to be declared a drought disaster area.

A budget came via the Sarah Baartman District Municipality, he said, but it turned out that R800 000 was only for refurbishing boreholes, and not for animal feed.

“In September last year we told the new MEC [Nomathamsanqa] Meth that we’d received nothing.” With the support of Premier Oscar Mabuyane, the 2018 application was reactivated, the funds were released and the feed bought.

“Well, this comes now with the rain of course,” Dyantyi said. “But still we are grateful.”