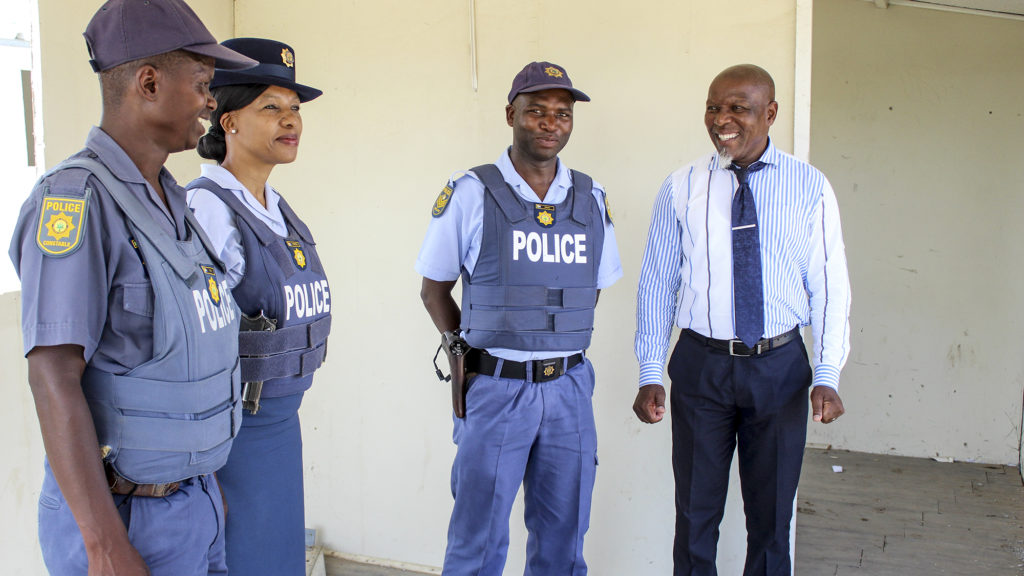 Khutliso Daniels Secondary School Principal, Radio Mcuba, was upbeat on the first day of term. The Joza school has full intake with three classes each in grades 8, 9, 10 and  11 and a Matric 2020 group of 34 whom he describes as hard-working. The school has a highly motivated 16-member staff.

Coupled with the beginnings of a new classroom – albeit still in pieces – it’s going to be a good year, Mcuba believes.

Pointing to a whiteboard on one side of the stoep surrounding the central quad, Mcuba says, “That’s where I’ve been teaching Creative Arts.”

This year, though, he hopes soon to be teaching in two converted mobile homes brought to the school by the Department of Public Works.

He’s been advised that it’s possible to connect the two units to make a single classroom – and plans to raise funds to achieve that.

“We do get a budget for infrastructure maintenance, but we can’t use that for donated structures,” Mcuba said.

“This is definitely very teachable,” he smiled. “We just need some assistance to put it all together.”

With temperatures on opening day soaring towards 40C, it was actually surprisingly cool inside one of the mobile homes, thanks to thick foam insulation inside. The upgrade would cost around R10 000, Mcuba said.

The school has two donated 5000-litre tanks which will see them through two days without water in the taps.

“That really motivated learners,” Mcuba said. “Thanks to donations from local businesses, we were able to reward strong academic performance with a range of gifts like book vouchers,” he said.

Khutliso Daniels’s 2019 Matrics achieved a 50% pass rate. Of 22 who wrote, 11 passed. Only one achieved a Bachelor pass.

Under the circumstances, though, Mcuba said he was not disappointed.

“What really hit us last year was that we had 73 Grade 12s. Of those, 51 were progressed learners.”

These are learners who have failed a grade for a second time, but have been allowed to progress to the next grade. It means schools must supply extra support to these learners, so they can better tackle the next grade’s curriculum.

It was intended by the Department to counter the high dropout rate in South Africa and keep children in schools, and went along with the Multiple Examination Opportunity (MEO) – the option to write Grade 12 over two years.

From this year, the Department of Basic Education will no longer off the MEO.

Announcing this change in policy in March last year, Minister of Basic Education Angie Motshekga said, “The result of this policy is that since the 2015 NSC examinations, there have been large numbers of NSC candidates sitting for the examinations, despite not having fulfilled the formal requirements for passing Grade 11. Historically, we observe high repetition rates and high dropout rates in grades 10, 11 and 12.”

Also part of the Department’s policy was that progressed learners shouldn’t be separated from full-time matrics.

“So in a class of 73 Grade 12s, we weren’t able to give the 22 full-time learners the attention we would have liked to.”

Discipline among older learners was a problem. Most were 19, but there were also a 20-year-old, a 21-year-old and three 23-year-old men in the matric class.

“Of course we wanted to give them a chance, but teaching a 17- or 18-year-old and a 23-year-old in the same class is very difficult. It really affected the younger learners.

“It’s a smaller group of progressed learners this year, who are the last of the MEOs.”

This year, schools aren’t obliged to teach new Grade 12s and the older learners together.

“We have 620 learners this year, from Grade 8 to Grade 12, and gradually, steadily, we’re getting the appropriate ages in each grade. It really does make a difference to how we’re able to teach,” Mcuba said.