Tournament showcases talent in the making 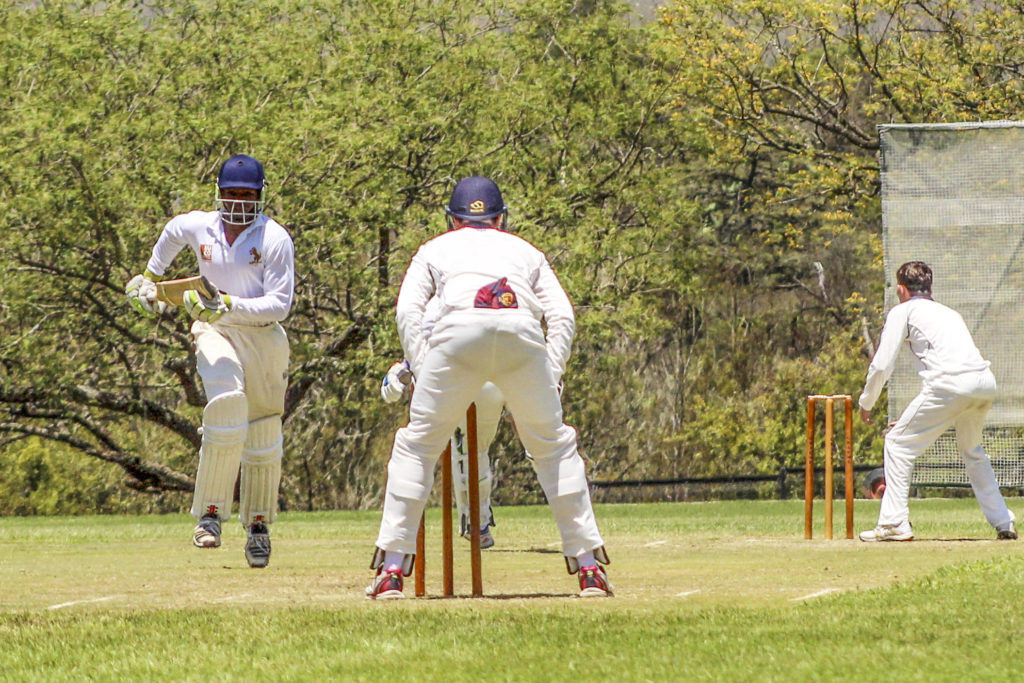 Graeme College batsman Liselihle Maphekula runs during their match against Trinityhouse at Graeme’s Somerset Field on Saturday 11 January. Twelve schools took part in the three-day Grahamstown Schools Cricket Festival hosted by Graeme College. Photo: Sue Maclennan
A young Graeme College 1st XI cricket side has had a very constructive start to the year. Graeme College hosted this year’s Grahamstown Schools’ Cricket Festival, which was uncharacteristically hampered by the very welcome rain.
Graeme won comfortably in a T20 fixture against Cambridge on the first day. Viwe Gana (2 for 19) was the pick of the Graeme bowlers, as they restricted Cambridge to 94/ 3 after their 20 overs. Graeme got off to a good start in the run chase which meant that Cambridge was always going to struggle to pull back the momentum. Fabio Rischbieter batted superbly scoring 32 off 16 balls taking the game away from Cambridge. Garwin Dampies (29) played a mature role ensuring the victory by 7 wickets in the 12th over.
Graeme struggled on day two against a well drilled Peterhouse team. The inexperience in the batting showed as Graeme were dismissed for 132 despite Rischbieter (33) and Ryan Bush (28) batting well. Graeme weren’t too much better with the ball in hand, although Mihlali Kobese was spuerb ending with figures of 3 for 30. There was too much other pressure put on Peterhouse, as they reached their target, winning by 6 wickets.
With day three being rained out, day four saw Trinity House also enjoy a win against a soft performance from the Graeme batsmen. Graeme bowled well to restrict Trinity to 112, but then collapsed and were dismissed for 73. Trinity won by 6 wickets.
The young Graeme side then started their CSA T20 campaign against a Kingswood team, which finds itself in the same development cycle. Graeme struggled a little with the bat on a slow surface, but the experience of Garwi Dampies (46) helped propel Graeme to a score they could possibly defend. Kingswood would have felt that missed a few chances to apply even more pressure on Graeme, with Dampies being the only batsman to really spend too much time at the crease. Michael Fourie was the pick of the Kingswood bowlers ending with 2 for 10 after his 4 overs. He was well assisted by Matthew Pritchard (2 for 12) and Luke Kelly (2 for 22).
The Graeme bowlers started superbly well with Aphiwe Mnyanda (1 for 14) and Sonwabile Tshona (1 for 18) applying incredible pressure on the batsmen. their spells were possibly the difference in the match, although Viwe Gana was absolutely crucial in the middle overs; bowling his 4 overs and claiming 2 for 13. The Graeme College side held their nerve in a tense end to the match securing a 3 run win. Cole van der Merwe batted well and scored 50 for Kingswood.
The Graeme Senior School and Junior School all play against Muir College this weekend, starting with T20 on Friday afternoon for the 1st XI.
* Report supplied by Graeme College.
Previous ArticlePremier League kicks off this weekend
Next Article Isimo sezulu sezulu asiyibambezelanga imidlalo yeLFA