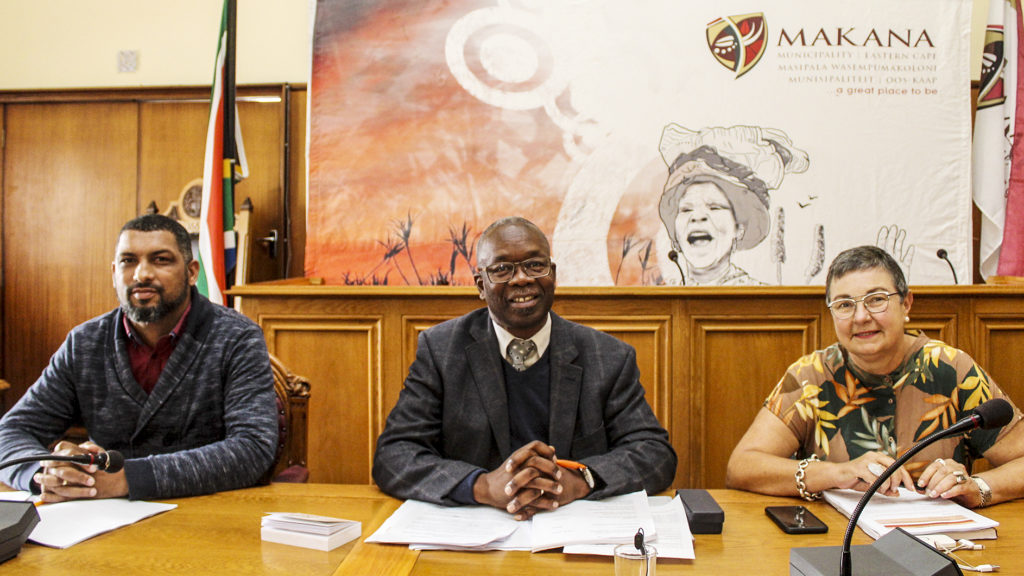 Chief Financial Officer Gerard Goliath, Mayor Mzukisi Mpahlwa and acting municipal manager Riana Meiring address media in the Council Chamber at the Makana City Hall in Makhanda on Wednesday 22 January. The municipality confirmed it will appeal last week's ruling by Judge Igna Stretch that its council be dissolved and the municipality be put under administration. But the Unemployed People’s Movement says it won’t allow urgent remedial action to be further delayed. Photo: Sue Maclennan

Makana Municipality has confirmed it will appeal the 14 January ruling for its council to be dissolved and the municipality put under administration. Meanwhile, the UPM has vowed to ensure the order is enacted immediately, saying an appeal could see urgently needed remedies delayed for up to a year.

Mayor Mzukisi Mpahlwa this week described as unfortunate Judge Igna Stretch’s ruling handed down in the high court in Makhanda last week. The Judge declared Makana Municipality non-functional in terms of administrative functioning and service delivery and therefore invalid. Mpahlwa says the municipality would appeal because the judgment hadn’t acknowledged significant improvements to service delivery and administration over the past five years. In addition, Makana’s dissolution would set a precedent that could affect every municipality in South Africa.

The Judge’s two-page order – the conclusion of a 117-page judgment – said Makana had failed to provide services to the community in a sustainable manner, promote a safe and healthy environment, structure and manage its administration, budgeting and planning processes, prioritise the community’s needs and promote its social and economic development. Makana Municipality had breached sections 152(1) and 153(a) of the Constitution and was therefore declared invalid.

Judge Stretch ordered the Eastern Cape Executive to immediately implement a recovery plan to make sure the municipality provides basic services and meets its financial commitments. She ordered the Provincial Executive to immediately dissolve the Council, appoint an administrator until a new Council is elected and approve a temporary budget to keep Makana Municipality functional.

The Unemployed People’s Movement were the successful applicants in a victory celebrated by residents across the town.

However, in a media briefing on Wednesday 22 January, the institution’s political and administrative leadership insisted that the city is in fact on an upward trajectory.

“We have turned a corner,” Mpahlwa said. “The court’s decision was based on the circumstances of 2014.”

He said they were investigating why important information had not been put to the court. This included that an updated version of the financial recovery plan was in operation, and that there was a visible improvement in service delivery.

“We are confident because we believe if we put across the things that we’ve done, a different court will come to a different decision,” Mpahlwa said.

Makana’s dissolution would have a domino effect across the country. Eastern Cape Premier Oscar Mabuyane last week indicated that while he welcomed the judgment as a wake-up call for local government, the precedent it would set meant the Province was likely to oppose it.

“I agree with the Premier – it would set a very serious precedent,” Mpahlwa said. “If this judgment compels us to be dissolved, every municipality, without exception, will be dissolved.

“Because all the municipalities are in the same situation, where they’re not able to recover 100% from the residents for the services they are expected to provide. It’s on this basis that this will create a very difficult situation for municipalities across the country.”

“Any municipality can deliver services only to the extent of the funds available,” he said. “As a municipality, we are owed more than R500 million by residents, businesses and some government departments. We owe our creditors less than R200 million. So if we were to get all of that money we would be able to pay all our creditors and still have money to deliver services.”

Monitoring and good communication were key to keeping Makana on its trajectory of recovery. It was also partnering with NGOs and businesses to tackle the area’s challenges and keep the municipality sustainable.

Acting Municipal Manager Riana Meiring said the reviewed financial recovery plan would be monitored on a monthly basis by the senior management and a report would be provided to Council.

A capital investment programme in terms of the municipality’s spatial development framework would also be monitored by senior management on a monthly basis. And the Service Delivery Budget Implementation Plan (SDBIP) – Council’s implementation plan based on the IDP – would be monitored to make sure plans were implemented.

“We will work very closely with the stakeholder forum established last year to understand, first, what the community needs and, second, to make sure we communicate.

Hindering its financial viability was that residents who can’t afford to pay for services were ignoring calls for them to register as indigent. This would mean as bigger subsidy from national Treasury for service delivery.

“For the past year we’ve pleaded without success for residents to apply to be registered as indigents,” the Mayor said.

This week’s press conference had been called, the Mayor said, to tell their side of the story. He specifically countered claims made by the South African Municipal Workers Union’s national secretariat. In a media statement last week, SAMWU said staff at Makana had not been paid.

“There is not one month when staff have not been paid,” Mpahlwa countered.

SAMWU also said the last payment of Makana’s equitable share (the portion of national taxes that municipalities receive quarterly from Treasury) had been withheld. This was false, Mpahlwa said. SAMWU in Makana last week distanced itself from its national office’s statement.

The Mayor said ongoing water outages were as a result of the worst drought in 200 years, rather than a failure to manage the supply.

Meiring responded to a question about new delays to the upgrade of James Kleynhans Water Treatment Works.; The upgrade is set to increase Makhanda’s supply to 20 megalitres, an addition of 7ML from the current supply, which in total would cater adequately for Makhanda’s population, Meiring said.

There had been legal challenges by companies tendering for both the first and second phases of the upgrade. Both had been resolved and the upgrade was on track for completion in 2021.

Attorney representing the UPM Brin Brody said the respondents – who include the Premier, the Co-operative Governance MEC and the President – have 21 days to apply to the Judge for leave to appeal. Should the Judge refuse leave to appeal, they can then apply to the Supreme Court of Appeal.

Commenting on Premier Oscar Mabuyane’s assertion that the process of an appeal effectively suspended the Judge’s order, Brody told Grocott’s Mail on Friday 17 January, three days after the judgment was handed down, “We are not going to allow that to happen. We are going to apply to court on the basis that the order must operate despite their appeal because of the very serious allegations of urgency in the papers – the environmental crises etc.

“The matter has already been delayed by a year and we can’t wait another year. Those are my instructions from the UPM.”

Spokesperson for the Premier Mvusiwekhaya Sicwetsha on Monday 20 January confirmed that the Province’s position remained the same as announced last week – i.e. that they were consulting with their lawyers and that the judgment’s effect would be suspended until the provincial government had decided how to respond to it.

“We are still at that point. There is nothing new to share with you,” Sicwetsha told Grocott’s Mail on Monday. Attempts on Thursday 23 January to contact him were unsuccessful.

Judge Stretch’s ruling is the first of its kind in South Africa. It sets a precedent that could have far-reaching effects for dysfunctional municipalities across South Africa.

READ LAST WEEK’S JUDGMENT HERE (click on each of the images below to access parts 1, 2 and 3 of the judgment):