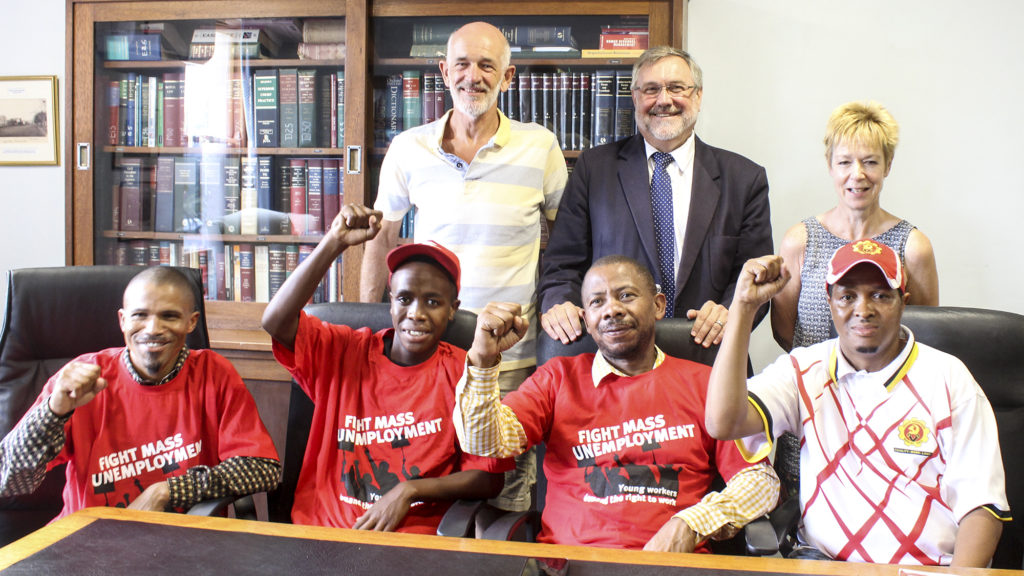 Richard Alexander, Tshezi Soxujwa and Ayanda Kota (UPM), Lungile Mxube (United Front) and (back) Tim Bull (evidence gatherer), Brin Brody (briefing attorney) and Sally Price-Smith (Grahamstown Residents Association) celebrate the Unemployed People’s Movement’s court victory in the offices of Wheeldon, Rushmere and Cole on 14 January 2020. Photo: Sue Maclennan
Grahamstown Residents’ Association’s statement on this week’s judgement to Dissolve the Makana Council and appoint an administrator.
The 14 January 2020 judgement by Judge Stretch in favour of the Unemployment People’s Movement (UPM) that requires the dissolution of council and appointment of an administrator was long in coming. It is the endpoint of a long saga of half-measures when a major intervention was actually required.
GRA through all this has tried to play an even-handed game. On the other hand, we have strongly supported the initiatives we outline here; on the other we have engaged constructively with government in the hope that protests and citizen pressure groups would cease to be necessary.

Backtrack to 2017 when Concerned Citizens Committee to Save Makana (CCCSM), convened by Ron Weissenberg, had lobbied government to appoint a turn-around specialist because of the dire state Makana was in. Government responded by seconding Ted Pillay from the Sarah Baartman District Municipality, to replace a long line of 3-month acting municipal managers. Pillay was here for the first half of 2018 and though he made a difference, such a brief period was not sufficient to turn things around. Since the appointment of Moppo Mene as municipal manager, initiatives like resurfacing major roads in town and upgrading the James Kleynhans Water Works have stalled.

GRA was part of CCCSM; we had hoped that this campaign would lead to decisive action from the government.

In December 2018, a petition calling for the dissolution of Council and the appointment an administrator under Section 139(1) of the constitution attracted and astonishing 22,000 signatures – about 90% of the number who voted last municipal election. The main drivers behind this petition were Ayanda Kota of the UPM and Daphne Timm. GRA worked hard to support this campaign but still hoped that government would see the light and take decisive action.

Though government never formally acknowledged the petition, the mayor was recalled and replaced by Mzukisi Mpahlwa who has impressed us and is a vast improvement over his two predecessors, Mayors Peter and Gaga. There have also been other significant improvements since his appointment: chief financial officer Gerard Goliath and water and sanitation manager Gubevu Maduna have both impressed us with their commitment and competence.

Yet, even so, the problems persist – potholes are out of control, some parts of town are without water for a week or more, the sewerage system is long overdue for overhaul and those parts of town where residents don’t clean up are a frightful mess. We also had to intervene in tandem with business to prevent Eskom from turning electricity off arising from unpaid Makana debt. There is just so much a new mayor and a few competent managers can do without political support to make major changes. Political interference with administration cannot end simply by replacing the mayor.

So when it came to supporting UPM by providing evidence for their case, GRA did so with great sadness yet with resolve that if all else failed, this action had to succeed. Again we put in significant time and resources, even while hoping government action would render the case moot. That proved a false hope as the problems continued to mount up.

Is it too much for us to expect our government to carry out their constitutional mandate and to administer their own laws and systems correctly and accountably?

Makhanda should be the Eastern Cape’s crown jewels: it is the site of one of the country’s top universities, it hosts a branch of the High Court, the National Arts Festival and SciFest, it has a lively local music community including hip-hop and choral and has a large collection of schools including some of the best in the province.

Yet much of the city looks like a cross between a cesspit and a trash heap. Businesses are closing faster than new ones can open and the property market is dead. The job market has dried up.

Civil society has refused to accept this as normal; the extremely diverse constituencies who have stood up for positive change attest to that. We are not the opposition: we are the people government is meant to serve.

GRA calls on government to accept this judgement as a wake up call and stop resisting the inevitable – a comprehensive intervention to turn things around.

I see reports that ANC structures are calling for the judgement to be appealed because of the precedent it sets. I propose a different precedent for the government: start governing. That is all we ask.

* Philip Machanick, GRA chair
A note on names: Makhanda is the new name for Grahamstown; Makanda is the municipality. GRA like many institutions like the local High Court has lengthy procedures for changes its own name that we will attend to in due course.
Previous ArticleLooking forward to a new year with fresh ideas… but worried about water
Next Article Keep the junior league clean