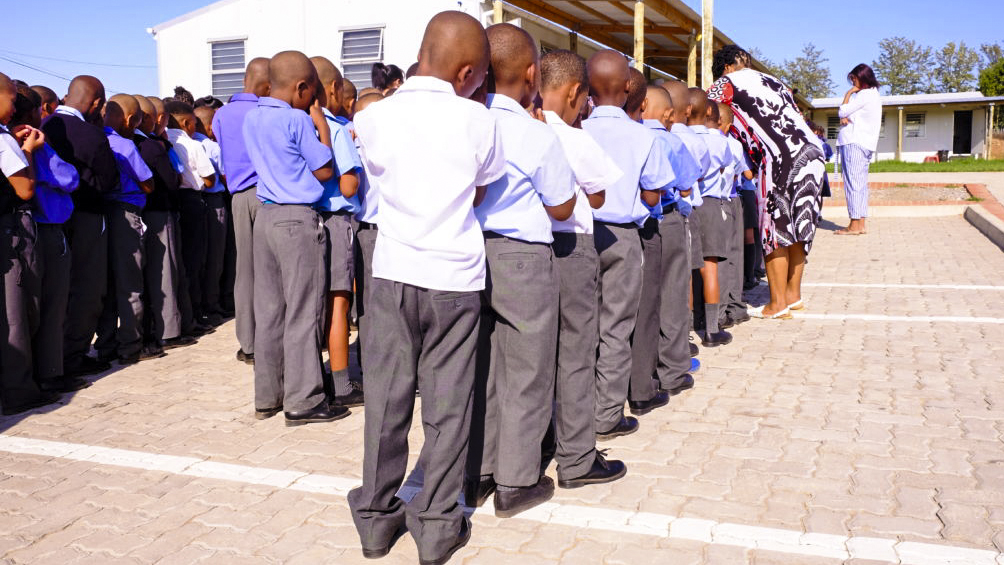 Water, electricity, infrastructure and furniture were at the top of principals’ worries as the 2020 school year started on Wednesday. They were excited about new teaching strategies and their biggest hope was for parents to be involved in their children’s school lives.

Samuel Ntsiko Primary School principal, Nombulelo Koliti, said despite being under pressure with too few teachers, they were eager to get going with plans to improve learning and teaching that they developed in partnership with Rhodes University last year.

“We are very serious about maths, and last year we got feedback from Rhodes our maths has improved. We hope to implement our maths clubs this year, and open a maths resource centre.”

The school is in a high-traffic area and learners’ safety is a priority. Monitoring cameras will be installed in some areas of the school.

“Parents should work with us and engage with their children about what they are doing at school,” she said.

“We are more prepared to take off with the year,” Kate said. “The stationery and learners’ workbooks arrived last year before we even closed.

“This year, we have programmes such as Funda-wande and Bakla-wande, that aim to help develop the children in reading and maths,” she said.

She, too, hopes parents will walk alongside their children throughout the year.

She prays that Makana’s water problems are resolved this year, as it badly affected their ability to successfully complete the school curriculum last year.

As eager Grahamstown Primary School learners streamed in for their first day of school on a sweltering Wednesday morning, the school still hasn’t heard from the Department of Basic Education about the fate of the stalled R55-million upgrade to its original premises.

Since February last year, the school has had to make do with temporary prefabricated structures adjacent to George Dickerson Primary premises. The revamp, originally due for completion in 2021, was to have included an administration block, a new library, an IT centre and a school hall.

Nevertheless, Grahamstown Primary’s Head of Department, Lucien Bartis says the school is open for business: “Teachers are all present, enrolments have been done, books and stationery are ready.”

“The main thing we are worried about is possible electricity outages, and also the water. We have one tank, but we really would like another one or two tanks and to connect them via a pump to the toilets,” Bartis said.

In June 2019, the contractors left the upgrade to the old school abruptly, telling Principal Leon Coetzee that they had not been paid by the provincial Department of Public Works, the implementing agent for the project. This came as a complete surprise to the school, as they had not been informed by the provincial Department of Education or of Public Works that funds were not available to pay the contractors.

It emerged last year that contractors have abandoned more than 50 major school upgrade projects in the Eastern Cape after government departments failed to pay them on time.

Many of these schools, including Grahamstown Primary, have been stripped of valuable materials and vandalised after being abandoned.

Mtima said that R260-million was paid to implementing agents in September 2019 in order to get contractors back on site, following a “cash injection from the national department”. However, work has not resumed at Makana Primary School’s original site.

This thing of water

In Joza, NV Cewu has a better story to tell about its new state-of-the-art ECD centre which is well on its way to its February completion deadline.

“For the other schools where infrastructure is incomplete, I pray that the government pays the contractors,” said Principal Anele Ndyolashe. The school has 60 new Grade Rs who are being temporarily housed in the school’s outbuildings. From grades 1-7, they expect to end up with a total of around 700 learners – down from 2019’s 756, which Ndyolashe rings alarm bells for him. But he hopes when he submits the required ‘10th day return’ to the education department – an indication of numbers and requirements – the picture will be different.

Many schools were forced to close during water outages in the first half of 2019, losing valuable teaching and learning time. NV Cewu is fortunate to have six 500-litre tanks. But with so many learners, especially in weather like Wednesday’s when the temperature soared well above 30, the school can remain open only two days or so if the taps are dry.

“It means we can prepare food, staff and learners can’t use the toilets, and we have to close.”

Next door at Makana Primary, Principal Mkhosi Williams said, “So far, so good,” of the first day attendance of over 80%.

His school increasingly receives children from eNkanini informal settlement. Last year they had 480 learners; this year he hopes for 500.

Makana Primary has two tanks, each 5000 litres, donated by Shoprite and Cashbuild respectively, as well as two for the school’s food garden. They can continue one day without water in the taps.

Furniture is short, with three children to a schooldesk, and he eagerly awaits furniture from the closed-down farm schools promised last year.

Archie Mbolekwa Primary Principal Lindiso Funani said the school was “in a good space” this year, withy 580 learners from Grade R to Grade 7, and 17 teachers. The school is still accepting late registrations until Monday.

The school’s four 5000*-litre tanks are not enough, although they have been able to remain open for as long as a week without water in the taps.