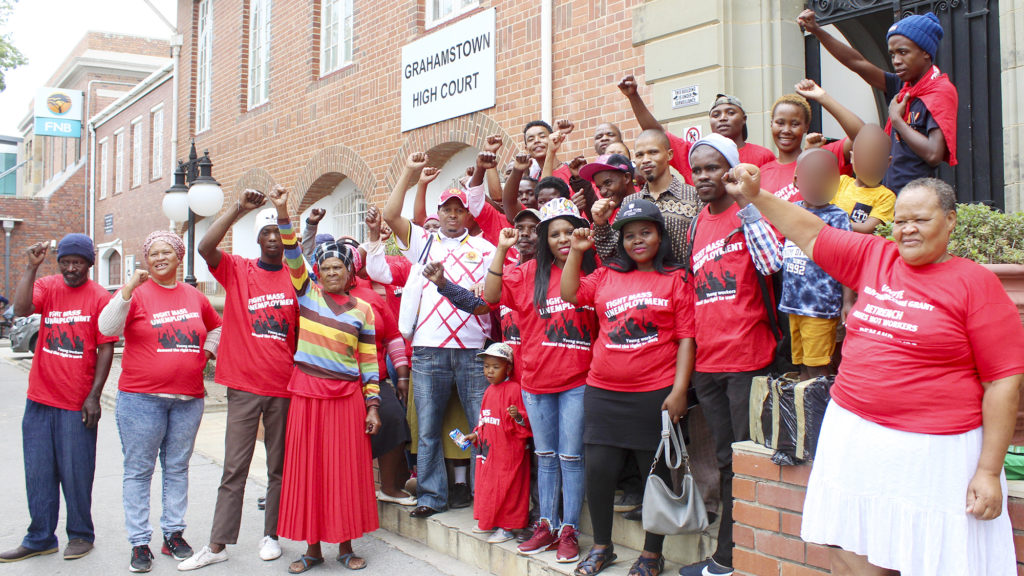 Members of the Unemployed People’s Movement celebrate outside the High Court in Makhanda where judgment handed down on 14 January 2020 ordered that the Makana Council be dissolved and the municipality be put under full administration. Photo: Sue Maclennan

The Unemployed People’s Movement (UPM) says citizens are the winners in a high court ruling this morning that declared the municipality invalid and ordered it to be put under full administration. In the first judgment of its kind in South Africa, Judge Igna Stretch has ordered that the Eastern Cape’s Provincial Executive dissolve Makana Municipality and appoint an administrator until a new Council is elected. The Mayor and Municipal Manager in their personal capacities face a punitive cost order, along with various national and provincial government entities.

Judge Thembinkosi Malusi, who handed down the judgment in the High Court in Makhanda today on behalf of Judge Stretch, kept journalists and others in suspense, revealing only inside the courtroom that the judgment was 117 pages long and that it was summarised in a court order at the end.

A copy of the mammoth judgment revealed that the Judge’s two-page order said Makana’s failure to ensure the provision of services to its community in a sustainable manner, to promote a safe and healthy environment, structure and manage its administration, budgeting and planning processes, prioritise the community’s needs and promote its social and economic development breached sections 152(1) and 153(a) of the Constitution and the municipality was therefore declared invalid.

The order says all the conditions for full administration exist in Makana Municipality.

And she ordered the Province to immediately dissolve the Council, appoint an administrator until a new Council is elected and approve a temporary budget to keep Makana Municipality functional.

Costs were awarded against the Mayor and Municipal Manager – not as has been the case in past matters in their ex officio capacity, but personally. As individuals, they must share the bill with the Eastern Cape government, the municipality, the Council and the Co-operative Governance Minister.

For the UPM, Brin Brody of Wheeldon Rushmere and Cole briefed Senior Counsel Izak Smuts with Thandwefika Mgidlana and Gavin Brown and the matter was heard in September 2019. In a press conference after today’s judgment, Brody said it was the first of its kind in South Africa and its length indicated the complexity of the judicial issues at hand.

He said the UPM were wonderful as clients, “because they had the best interests of the town, especially of vulnerable people, at heart”.

“We hope this will be the start here of a new dawn,” Brody said. He said the precedent setting judgment would make it easier to achieve administration for dysfunctional municipalities and that a similar matter against Enoch Gijima Municipality would be heard in Queenstown in the next fortnight.

“As a lawyer, this has been one of the highlights of my practice,” Brody said.

The UPM’s Ayanda Kota thanked Brody as well as evidence gatherers Tim Bull and Daphne Timm “and other amazing people” for their part in the case.

“The people have won, democracy has been served,” an elated Kota said. “People united are winners.”

Speaking to Grocott’s Mail minutes after Judge Malusi’s brief announcement, Mayor Mzukisi Mpahlwa said they would study the judgment and see whether there were options for appeal.

In a statement, the Grahamstown Residents Association (GRA) congratulated the UPM on their emphatic win.

“We would also like to thank their legal team who have taken on a number of public interest cases for no pay, except for the prospect of a costs order against the other side,” Chairperson Philip Machanick said.

“This judgment is a clear warning to the government that being elected does not absolve you of carrying out your constitutionally-mandated duties,” Machanick said, referring to ongoing issues with water and at the municipal landfill.

“GRA calls on the government not to appeal this case but instead to appoint an administrator who knows and cares about this community. We further appeal to any who contest the election to replace the council to nominate candidates with the interests of the community at heart and who will work hard to turn things around.”

ANC Regional Chairperson Scara Njadayi said the party was likely to encourage a joint appeal against the judgment.

“We are here to start looking at the judgment and its contents,” Njadayi told Grocott’s |Mail this afternoon. “We’ve agreed we must appeal the judgment. Tomorrow meeting we’ll be meeting with the leadership of the Provincial Executive to take them through our position.

“I won’t say there has been judicial overreach until we’ve looked at the gravity of the judgment and what is entailed. However, we will encourage the Makana Council and all the respondents to mount a joint appeal.

“This is a precedent for Makana and the whole country – it’s going to be a problem if it is left unattended.”

The Democratic Alliance (DA) in the Eastern Cape welcomed the judgment.

The party’s provincial leader Nqaba Bhanga said, “The current failing ANC government has run this once prosperous municipality into the ground. Years of maladministration, the total collapse of service delivery, massive Eskom debt, the growing water crisis and several audit disclaimers by the Auditor-General are only a few examples of how the ANC has failed the people of Makana.”

Bhanga said the court had also set a positive precedent that could be used in defunct municipalities across the province.

The South African Municipal Workers Union was set to meet this afternoon to discuss the implications of the judgment and would comment later, spokesperson Wandile Duruwe said.

In a recorded response to Grocott’s Mail’s questions, spokesperson for Eastern Cape Premier Oscar Mabuyane, Mvusiwekhaya Sicwetsha, said the provincial government noted the judgment and was studying it to understand its specifics and those of the order.

“The provincial government’s decision on steps to be taken regarding this will be communicated soon,” Sicwetsha said.

“Whilst the judgment has far reaching implications, it may be appealed, and therefore its application will be suspended until such time as a final decision is taken in this regard.”

Makana’s dissolution is in terms of Section 139(5) of the Constitution. Other Section 139 dissolutions take effect 14 days after the Provincial Executive has notified the Minister of Co-operative Governance and the National Council of Provinces. We’ve not yet been able to confirm the legislated timeline for Makana’s dissolution.

* Updated soon after publication to include the ANC’s comment.
* Children’s faces in the main photo blurred in line with Grocott’s Mail’s digital policy.