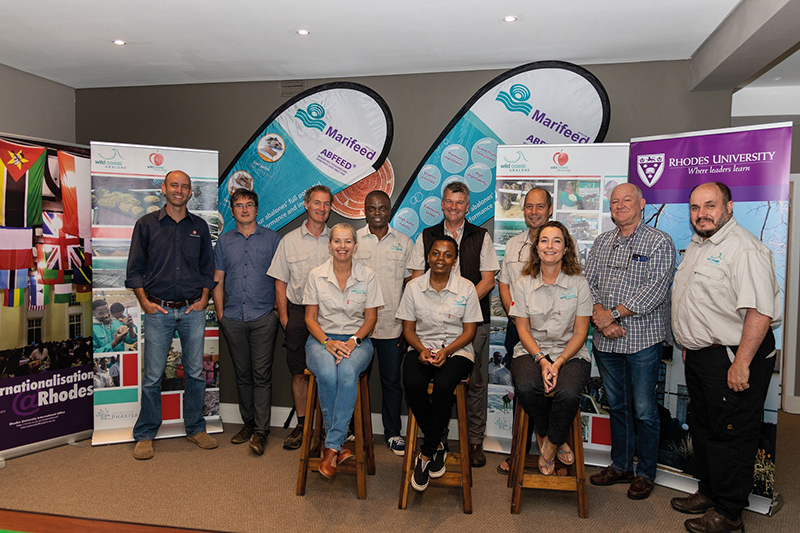 “While much of the workshop is focused on work plans and plans for prototypes, we also aim to make more stakeholders aware of this work and its impact,” explained Professor Cliff Jones, Head of Rhodes University’s Department of Ichthyology and Fisheries Science (DIFS).

The three case studies Prof Jones’ team will be focusing on include: Land Based Integrated Multi-Trophic Aquaculture (IMTA), Sea Based IMTA and Sea Cucumber Aquaculture.

IMTA is a process that farms several species together using waste from one species as feed for another. “One of our focus areas will be abalone, as it is the largest aquaculture industry in South Africa,” said Jones.

Jones and his team will be observing how abalone respond when placed in tanks with sea-cucumbers that feed off their solid waste and macro-algae that remove dissolved nutrients from the abalone effluent. “We have seen that the overall health of abalone improves if their tanks are kept free of their own waste. The inclusion of sea-cucumber and algae in the abalone production system may also reduce the need for manual labour to clean the tanks and this could lower the stress levels of the abalone if the tanks don’t have to be handled as often.”

Furthermore, the mature sea cucumbers, which are considered a delicacy in China, can be exported, and the algae can be fed back to the abalone making the process even more sustainable.

During the workshop, attendees visited Wildcoast Abalone’s premises, so they could see how this kind of sustainable IMTA is done.

Jones’s team includes Rhodes University’s Professor of DIFS Peter Britz, and Associate Professor of Zoology at the University of Fort Hare Niall Vine, as well as several of their students.

In all, 36 research and industry partners from across 16 countries, most of which border the Atlantic Ocean, are involved in the AquaVitae project. It includes nine work packages and 13 case studies focused on developing sustainable aquaculture technology innovation and implementation, with a total budget of eight-million euros (around R130 million).

“All of the work will be carried out in collaboration with the different partner countries,” explained Jones.

This EU-funded project forms part of the Horizon 2020 programme, and is due for completion in 2023.

Previous ArticleWatch Movies at the Monument these holidays!
Next Article Natural wonders and amazing history at the museums