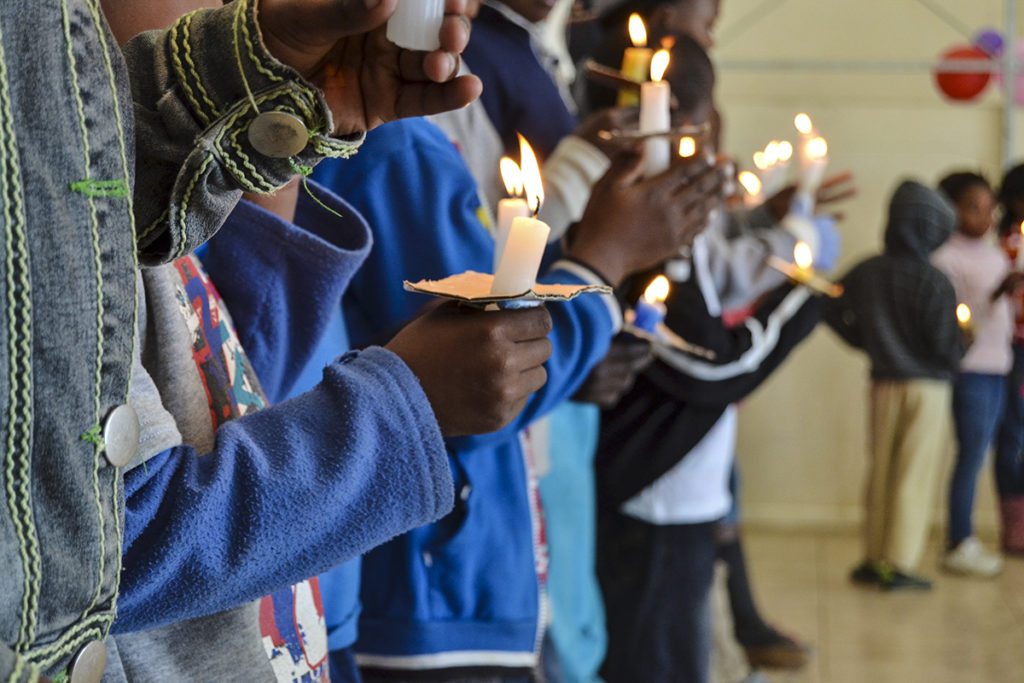 Children hold candles at a May 2015 event for those affected by HIV/Aids. NGOs caring for children's welfare struggle with small, irregular subsidies. Photo (2015): Sue Maclennan

Two Makhanda NGOs are concerned about the future of the children in their care, as delayed and inadequate subsidies see the organisations sink deeper into vulnerability. Kathryn Cleary reports.

Child Welfare Grahamstown has faced delayed subsidy payments from the Department of Social Development (DSD) for more than 15 years, and despite the organisation’s critical work in the community, pleas for timely payments and better communications seem to go unheard. This year, the organisation received their subsidy only in September, a delay of more than five months.

“The NGO is subsidising government work”, said Director Woineshet Bischoff. “Nowhere in the world is foster care done by an NGO except in South Africa.

“We are really worried about the future”, Bischoff told Grocott’s Mail.

Her concern is well founded, with at least one neighbouring branch of the national organisation scuppered by financial uncertainty. By the end of 2017, East London Child Welfare was forced to close its doors after ongoing delays in payment put the organisation on its back, financially.

Child Welfare Grahamstown runs a number local programmes, including a preschool with 60 learners, a cluster foster home with 16 children and a literacy and numeracy programme for 80 children. The organisation is classified as a child protection organisation (CPO) and works with the DSD to assist vulnerable children.

Years and years of delayed payments have resulted in Child Welfare tapping into reserve funding, a measure that should only happen in case of emergencies. “This is the biggest stress”, said Social Work Manager Kim Wright. “NGOs also have staff!” she emphasised.

In addition to subsidies for social work, Child Welfare also receives a small subsidy for their three foster parents, as well as R15 per learner per day attending the pre-school. 45 children attend the pre-school, which could translate into R2 200 per month if every child attended every day.

However, despite delayed payments and communication hardships, Bischoff said they generally had a good relationship with the Department.

Child Welfare is not the only organisation caring for vulnerable children that’s been put at risk by delayed payments, Eluxolweni Child and Youth Care Centre (CYCC) has had the same challenges.

Eluxolweni’s Manager, Jane Bradshaw, said the organisation had never received its subsidy on time. Eluxolweni is one of two CCYCs in the District: the other is in Graaff Reinet.

“The contract states that we will get [the subsidy]quarterly, and it also states that if we don’t comply, they can cut funding,” said Bradshaw. “Raising salaries is extremely difficult, and we did use more money for salaries in the previous financial year than we should have, so we’re being watched.

“By mid-May we were in crisis,” said Bradshaw. “We could only pay our staff half their salary on 22 May and we couldn’t pay them anything in June.

“That resulted in terrible suffering by the staff”, she said, “and four resigned.”

Eluxolweni has 10 staff members, but only four carers and one social worker are subsidised.

Bradshaw said Eluxolweni had never received any formal communication about the delayed payments; instead they had heard it from other organisations.

“Government officials and teachers all get paid in April, the beginning of the financial year, so why can’t they plan that [the]organisations they fund can also be paid in April. That’s my big, big question! Why do we have to wait six weeks or two, three four months because it needs the correct kind of planning,” said Bradshaw.

“How do you judge a country? By how it treats its children, its elderly and its disabled,” she emphasised.

Seeming to confirm the allegations of poor communication from DSD, Grocott’s Mail did not receive any response to a set of questions sent for comment. The questions concerned Child Welfare as well as Eluxolweni.

“The price of vulnerability” is an investigative series looking at the effect subsidy delays have on NPOs and the people they care for. The longer the delay, the more vulnerable these NPOs are, and it comes at a terrible price. Previously, Grocott’s Mail has written about the McKaiser Old Age Home and Safe House.