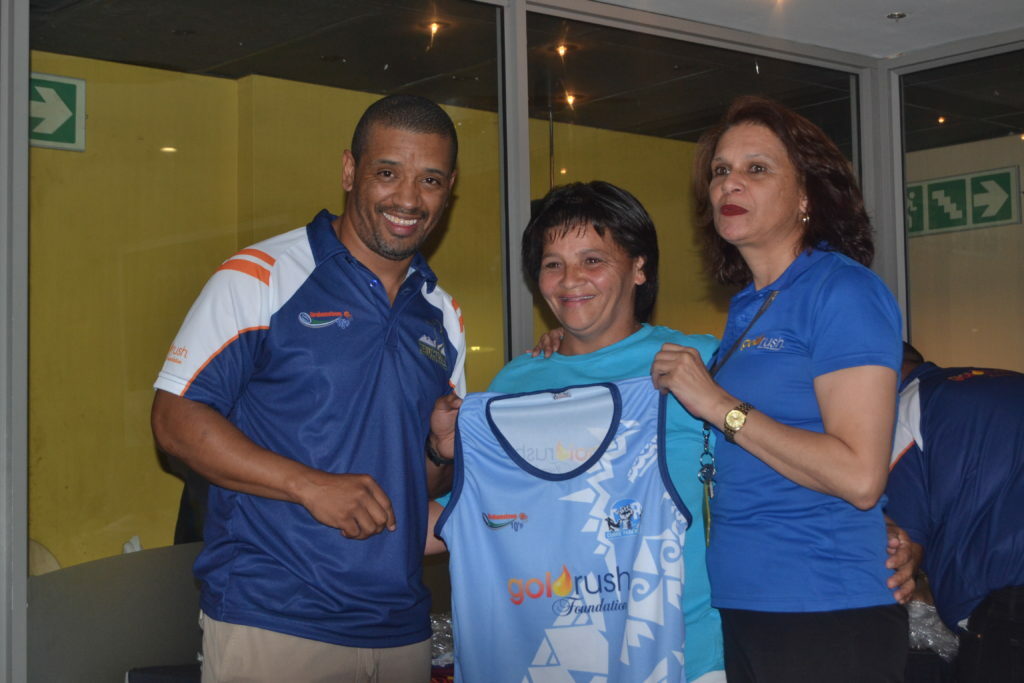 Goldrush, the title and main sponsor of last weekend’s Fabian Juries Community Fun Day hosted by Grahamstown Brumbies Rugby Club, handed over new kit to the rugby and netball teams ahead of the annual event. Team representatives, sponsors, EPRU President Andre Rademan, EPRU Executive, Makana Mayor Mzukisi Mpahlwa, SEDRU representatives, Grassroots Rugby Administrator Qondakele Sompondo, EPRU Marketing and Media Manager Kim Daniels and the local organising committee for this prestigious and popular event were there.
EPRU President Andre Rademan spoke about Eastern Cape player Fabian Juries and his achievements as an International and provincial 7s and Provincial star.
“I’m very proud of you, Brumbies [rugby club]in the way that you make this event work,” Rademan said. “Also a big thank you to Goldrush for their generous sponsor and support for this event and for the community of Grahamstown. I will make a bold statement that we will build the Currie Cup out of the club players in the EPRU league for 2020, and I don’t want to use the EP Kings players. Eastern Province is the cradle of black rugby in SA.”
He also mentioned the Eastern Province residence that was part of the winning Boks Rugby World Cup squad that came from this area.
Makana Mayor Mzukisi Mpahlwa said, “Our communities are in distress and when you come to this kind of event, you immediately feel happy. I felt proud of my good friend and management member of the World Cup winning team, Charles Wessels. He is the son of the soil as a World Cup winning member from this area.
“Thank you Brumbies for the role you play in social cohesion and uplifting the community. Rugby brings us together.”
Defending champions Cellotape Eagles opened the proceedings at 8.30am on Saturday against two time winners Currie Park Rebels.