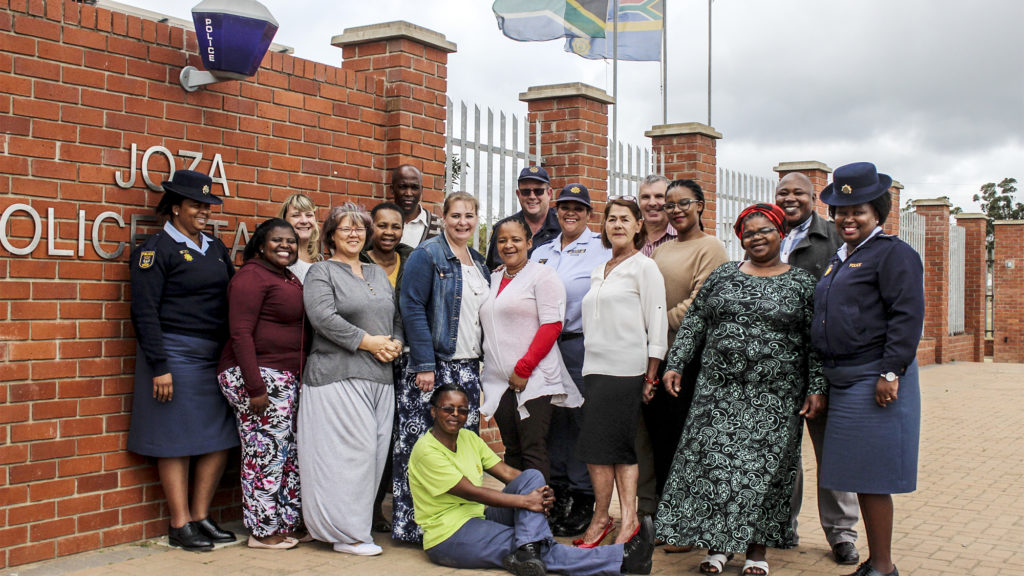 This team and their motto, ‘Together everone achieves more’ is a living reality. Their positive attitude and willingness to extend a helping hand is unparalleled. Despite each having their own responsibilities, they do not hesitate to assist each other when urgent deadlines have to be met.

The station has on numerous occasions been complimented on its neatness and cleanliness. This can be attributed to an initiative by the support service staff to assist the general workers at the station by dedicating a day in a month to assist them in cleaning the station.

The strategic objectives within the various components within the support environment – for example the financial services, human resource management and supply chain management – were met and in many instances exceeded.

Working in an environment surrounded by a poverty stricken community has had a profound impact on the staff, to the extent that they have initiated several community outreach events during which clothing and food parcels are distributed to the needy.

Each team member is dedicated, disciplined, courteous and acts in a professional way, which leads to a great working environment and a respect for colleagues, their clients and members of the public.

Lieutenant-Colonel Memani, the Vispol Commander at Grahamstown Station,  was  first runner up in the category Vispol employee of the year level 8-12.

Memani was instrumental in the arrest and recovery of money in a cash-in-transit robbery at the Makana finance department. Two suspects were arrested and all the money was recovered. The firearm used during the robbery was also recovered.

Other provincial awards went to Lieutenant-Colonel Dirk de Kock, support head at Port Alfred Station with 40 years of service to SAPS. De Kock was named Admin Employee of the Year level 8-12, as well as 1st runner-up in the category “Man of the Year”. An experienced Station Commander, he gained colleagues’ extra respect when quotes to fix the boundary fence of Hamburg and Bell Police Station came in at an eyewatering R1 million-plus. De Kock opted to repair the fence himself, with the help of a gardener and general worker. The cost of the material to repair the fence at the two stations was about R5000.

er award was for her dedication to seeking justice for victims of sexual crimes, and tracing suspects. She made use of the resources at her disposal and worked after hours to try and trace suspects by creating a database of all sexual offenders since 1977. Due to her diligence, she has assisted several detectives within Port Alfred, as well as surrounding clusters, to link and trace suspects. She has testified on several occasions in court and was highly praised by the National Prosecution Authority after lengthy sentences were meted out to sexual offenders.

Warrant Officer Manisi was named runner-up in the Detective Employee of the Year Level 5-7 award. Manisi was assigned to investigate a case of Murder and Rape in Peddie Policing Precinct. There were no eyewitnesses nor clues, and concerned community members demanded an arrest based on their suspicions.

Manisi instead collected every available piece of DNA evidence and waited for the process to unfold. Eventually he arrested the suspect and kept an indisutable chain of evidence regarding the DNA. As a result, there was no loophole available for the defence. During the trial, the judge commended the member for his extraordinary dedication during his investigation.

The accused was convicted on both murder and rape charges and sentenced to two terms of life imprisonment. An application for leave to appeal was dismissed. The State’s case was based on circumstantial evidence, and without Warrant Officer Manisi’s efforts and dedication, this case would have been undetected.

Brigadier Morgan Govender, Port Alfred Cluster Commander, commended the officers and members for their hard work, commitment and dedication. He urged commanders to put pen to paper when their members perform well and recognise their efforts.