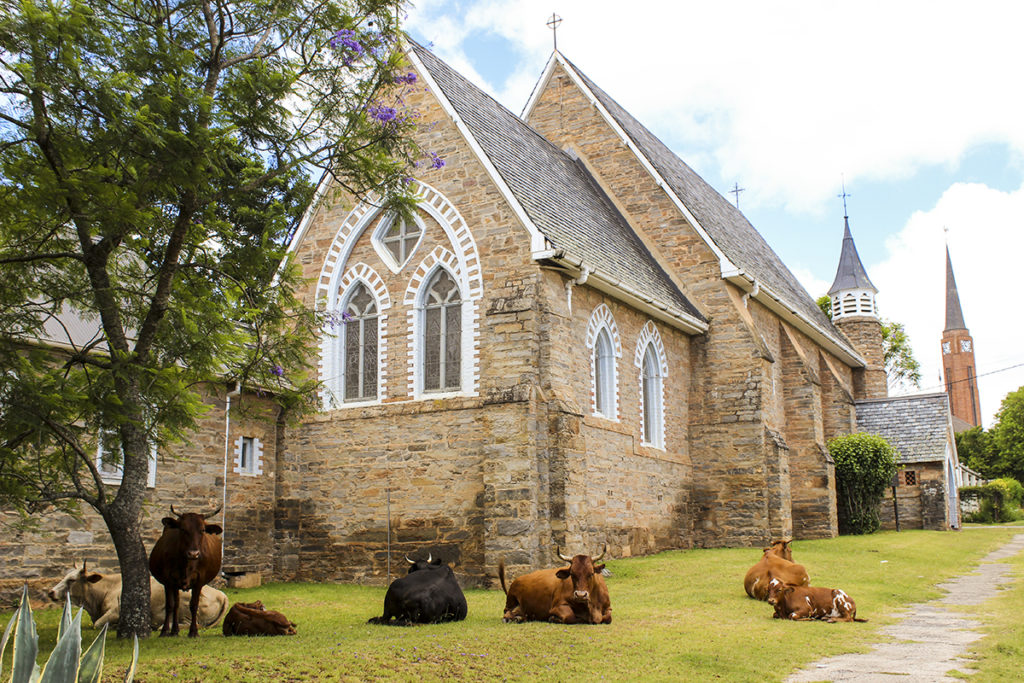 Cows graze in front of St Bartholomew's Church. The municipality has rejected an application for a 25-metre cellphone tower nearby on the grounds of the spatial planning and heritage Acts. Photo (2016): Steven Lang

Makana Municipality has rejected an application for a 25-metre-high cellphone tower to be erected in the heart of Makhanda’s (Grahamstown’s) heritage conservation area. The surrounding infrastructure could expand to roughly 13m x 13m – half the width of the church as you face it – according to the plans.

Sunnyside residents were earlier this year shocked to find out about the structure proposed for midway between the Dutch Reformed Church and St Bartholomew’s in Market Street. They expressed a range of concerns including health worries over electro-magnetic radiation, aesthetics, disturbance to garden wildlife and the effect on property values.

The main reasons given for the application being rejected are the Heritage Act and zoning by-laws.

The Church grounds are currently zoned Community Zone 2. The applicant, Atlas Towers, applied to Makana Municipality for the split zoning of the Church property, Erf  4102, to Utility Zone 1. The Church is surrounded by residential properties.

The “utility zone” is primarily aimed at serving uses undertaken by local, provincial government agencies as well as building utility services such as electrical substations,” Makana’s Town Planning Department said in their reasons.

The background to the heritage-related reasons was that the heritage conservation area between Hill, Beaufort, Bathurst and Market streets historically known as “Settlers Hill” was divided into 32 lots for settlement between 1824 and 1832.

This area is described in detail in the Radford Report. Radford identified heritage sites – the “conservation area” – in what was then Grahamstown and his research is still used as a reference in making decisions about development.

First, the 1999 National Heritage Resource Act says a heritage structure or area should be respected by non-infringement and a buffer zone of up to 5000m, Makana cited.

Second, the height limit in the heritage conservation area – “Settlers Hill” – was single storey: “The cell mast is not aligned to this limit, being 25 metres tall,” Makana says.

The application is currently in the phase in which the applicant has 21 days in which to lodge an objection to the decision.

Town Planning falls under Makana’s Directorate for Local Economic Development and Director Riana Meiring said in reply to the question of whether they expected an appeal, “We do not know at this stage whether the applicant is going to appeal or not.”

Chairperson of the Dutch Reformed Church Council, Marius Crouse, said they had not yet seen the reasons for the application’s rejection and so had not yet decided whether to appeal.

“The church council said right from the start of the process that [although]there obviously is a need for cellphone towers in the area, we will let the process follow its course and abide by the outcome,” Crouse said. “I would assume that the reasons for turning down the application will be provided to the church and when we receive it, we will make a final decision on whether to object or to accept.”

Sunnyside resident Roddy Fox was among those who submitted objections. His included a detailed numbered map indicating that around a third of Makhanda’s declared heritage sites are situated within a 250-metre radius of the proposed site for the cellophone tower.

“I am delighted the application was rejected,” said Fox, at the time the news was announced. “Our heritage is one of the big assets that we have in this town.”

Market Street resident Elsabe van Tonder lives directly opposite the intended site for the cellphone tower and was relieved at the news.

“I am relieved and grateful to everyone who helped,” Van Tonder said. “How wonderful that ordinary people can change an outcome of a situation that would have meant a reduction in the quality of life in the neighbourhood.”

A NOTE ON LAND USE APPLICATIONS
The Spatial Planning and Land Use Management Act (SPLUMA) sets down the framework for land use applications. According to the Act, timeframes and procedures are determined by the municipal planning tribunal.