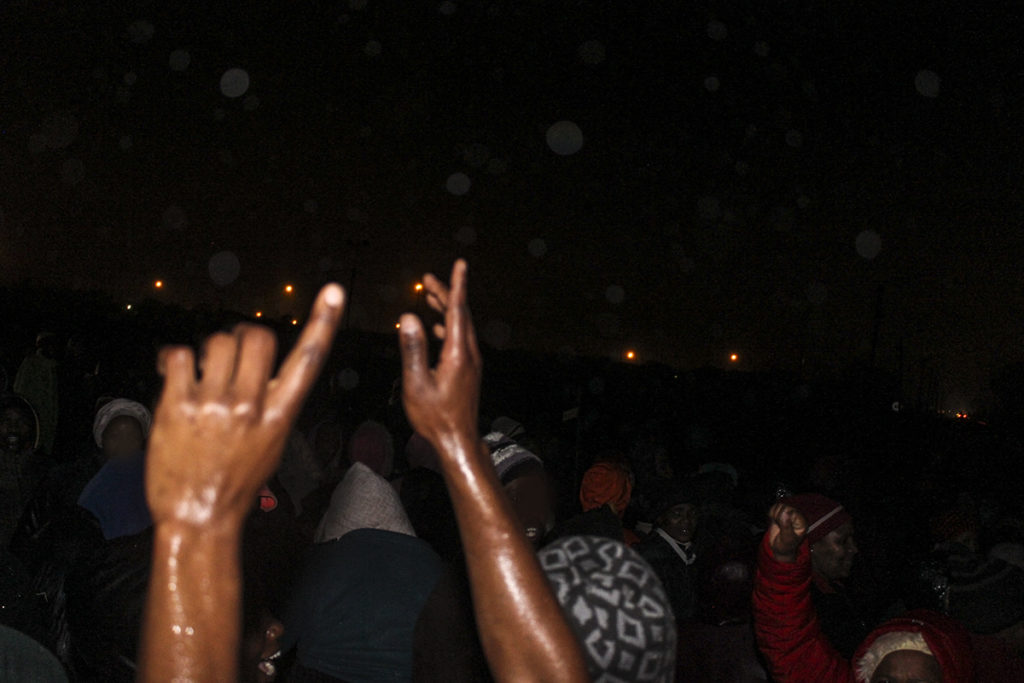 A protester's arms glisten in the rain as residents from the Inkanini Informal Settlement gather at the intersection of the R67 and Makana Way, opposite the Indoor Sport Centre late Wednesday 6 November. Photo: Sue Maclennan

Around 300 protesters marched through mist and drizzle late Wednesday night 6 November from eNkanini to the busy Makana Way/ R67 intersection in east Makhanda. The informal settlement residents were likely to repeat the action this morning from around 6am, a spokesperson said.

In June 2017, thousands of hopeful people queued over several days, hoping to be allocated plots on the empty land north of Extension 10, Extension 9 and Transit Camp.

The allocation of the 18m x 23m plots was done by a committee of individuals led by Asanda Bobo. The move took Makana Municipality by surprise and even  Ward 3 councillor Mthunzi Fatyi said he knew nothing of the land allocation at the time..

The settlement grew quickly and there are now more than 1000 self-built homes spread across the veld.

Last night around 9.30pm Grocott’s Mail spoke to residents at the protest site who said they were confused about promises made to them and wanted answers. They’d heard second-hand reports from the Council meeting on 30 November and on the basis of these, believed there was a plan to remove them from the land.

Last night’s protest was too late to obtain Makana Municipality’s comment, and Grocott’s Mail will seek their specific responses to concerns the eNkanini residents expressed.

What we can confirm is that eNkanini was on the agenda of the 30 October Council meeting.

One agenda item, from the Local Economic Development Directorate, was a report providing feedback on an intervention in Makhanda by the national Department of Human Settlements. The DoH looked into the possibility of Township Establishment (i.e. formalising the settlement).

According to the report, the municipality’s Spatial Development Framework – a blueprint for planning the layout of residential and business areas – should incorporate both eNkanini and Sun City for township development.

According  to the report, Setplan was appointed in 2011 to undertake the process of Township Establishment  for eNkanini.

“The conceptual plan was drafted, but due to financial constraints… the project ceased,” the report notes. I was eight years since Setplan was appointed, making their contract’s validity uncertain.

Grocott’s Mail will seek to obtain the municipality’s response and will continue to report.