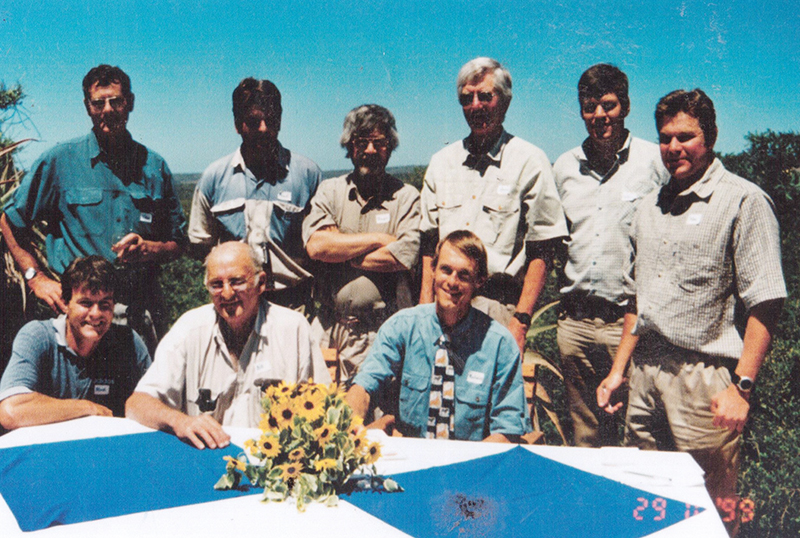 This photograph was taken in 1999 during the original signing of the constitution with the four farming families. Photo: Supplied

One of the most exciting ecotourism developments in the Eastern Cape – Amakhala Game Reserve – celebrates 20 years of Conservation and Community this month.

The reserve is a unique collaborative venture founded by four farming families that have lived in the area since the early 1800s, who joined their farms into a single 8 500-hectare game reserve in 1999.

Following a remarkable 20-year transformation, Amakhala now thrives as an example of how agricultural land can be successfully converted into a cooperative ecotourism venture that protects wildlife and uplifts the surrounding community.

Conservation
In recognition of its contribution to biodiversity conservation in South Africa – including multi-layered anti-poaching measures – Amakhala Game Reserve was awarded Protected Area Status by the Provincial Government in 2018.

Community
Community is very important at Amakhala. The Amakhala Foundation was founded in 2009 to uplift the local community, through initiatives such as the Amakhala Conservation Centre, where thousands of local school children come to learn about the environment every year; and the Amakhala Craft Centre, where visitors can purchase unique handmade items from local artists.

Anniversary commemoration
To commemorate the historic occasion of Amakhala’s 20th anniversary, a special coffee table book has been published that showcases the reserve’s spectacular landscapes and wildlife, and tracks the rich history of this area from its agricultural origins to becoming the renowned safari destination and recognised Protected Area that it is today.

Celebrating Twenty Years of Conservation and Community is a visual celebration of the achievements of the landowners, staff, managers and guides, who have played a significant role in the success of Amakhala Game Reserve, and a heart-felt thank you to the families, friends and suppliers who have been part of this remarkable story.

The book will be available from the various lodge shops and the Amakhala Craft Centre. To find out more about Amakhala Game Reserve, please follow us on Facebook, Instagram and Twitter or visit www.amakhala.co.za

Previous ArticleThe future eaters
Next Article Everyone and their dog… for a good cause!