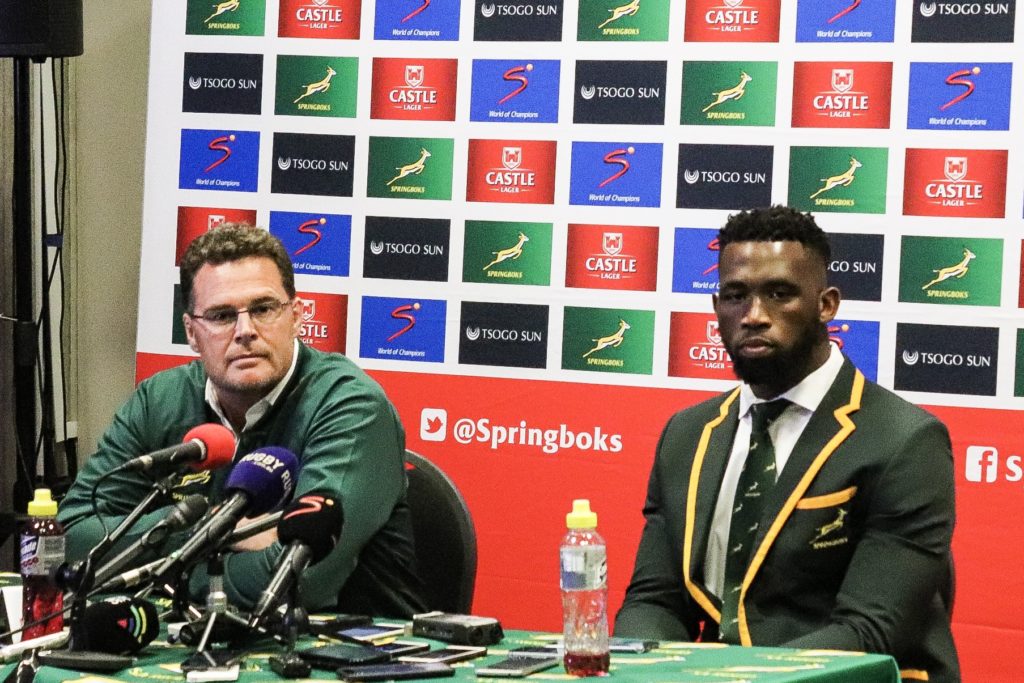 The Springboks have made it to their first Rugby World Cup Final in 12 years, having slugged out their tight semi-final against Wales on Sunday. If South Africa are going to maintain their unbeaten run in World Cup finals, head coach Rassie Erasmus will need to deliver a masterstroke in team selection and game plan.

Sunday’s semi-final attracted a lot of negative comments on social media for being “boring” and “a disappointment” after England and New Zealand’s semi-final the day before. Many fans, South African and Welsh alike, thought that the high number of kicks, combined with both teams’ apparent unwillingness to play the ball out to their backlines, only served to dampen the occasion. Yes, it was difficult to watch, but it played to both teams’ strengths.

Just like he did in South Africa’s quarter-final against Japan, Erasmus decided to go with six forwards and two backline replacements on the bench, showing an eagerness to front up and break down their opposition in the first half, before opening up in the second half. This worked perfectly against Japan, with two of South Africa’s three tries coming after changes were made to the pack to bring on the more mobile and rangy players.

While Erasmus’s game plan worked to some degree against Wales on Sunday, it was perhaps shortsighted of him to think that Wales would be as easy to break down in the first half as Japan was. Wales kept themselves in the match through applying pressure and forcing South Africa to give away penalties in kickable positions. A major moment in the match also saw Wales score off of a scrum in South Africa’s 22m, after they turned down a shot at the posts in favour of the scrum.

This led to a very nervy end to South Africa’s semi-final, with only a penalty separating the two teams. While the territorial-kicking game and forward-focus attack did bring the Springboks to the final, it is clear that this is not the gameplan that will beat England, nor is it the one that the team is most effective with.

South Africa have scored the most points, and the most tries throughout the World Cup, despite having garnered a reputation for playing predictable, boring rugby. They have scored 20 more points than New Zealand, and 52 points more than their finals opponents. They have also scored nine more tries than England throughout the tournament.

Clearly they can score tries, and the combination their strike weapons, their powerful maul and dangerous wings, shows that South Africa can score from anywhere, and that neither their physicality or their flair is dominant in the team. Erasmus has simply identified weaknesses in his opponents, and devised a game plan suited to exploiting them.

With that said, Erasmus will be excited after watching England’s semi-final against New Zealand, as he would have identified a number of key areas that South Africa can dominate, and build momentum.

England were totally dominant in their win over New Zealand on Saturday, and looked like the best team in the world beating the former best. The surprise of England disrupting one of the best lineouts in the competition would usually be cause for concern for their next opponents, however Erasmus should be able to use that to his advantage.

South Africa have statistically the best lineout in the World Cup, with their first lost lineout coming this past weekend. A settled back three which boasts two additional jumpers, as well as two in-form and dominant hookers combine to form a towering lineout structure. Let us also not forget that South Africa have also stolen the most opposition lineout ball as well. England will be less likely to disrupt this aspect of the Springbok game as they did so easily against New Zealand.

Another aspect of the game that England dominated against New Zealand was their dominant defence. The young blood in the England squad, Maro Itoje, Tom Curry and Sam Underhill put together a clinic in monster hits and dominant tackles against the former World Champions. But South Africa are no slouches in the physicality department either.

Duane Vermeulen, captain Siya Kolisi and Pieter-Steph du Toit have put in some of the biggest hits in the World Cup, and have also been difficult to push back when on attack. It will be difficult for England’s defenders to get under the South African ball carriers and push them back, particularly as South Africa will likely look to push the ball wider than they did against Wales.

Despite their dominant mid-field defence, England have shown a weakness in their one-on-one wing defence, with Johnny May and Anthony Watson being stood up out wide more often than not. While their cover defence has been second to none, it must be said that the likes of Makizole Mapimpi, Sibusiso Nkosi and Cheslin Kolbe (if he is declared fit) will be looking forward to running rings around the English wingers with their fast feet and agility.

However South Africa will be outmatched in the final if they do not shore up their own weaknesses. First and foremost of these weaknesses is the Springboks’ inability to capitalise on golden opportunities. The have squandered a number of opportunities through handling errors and ill-discipline, and have lacked some composure in open play which has cost them a number of points.

England will not let South Africa get away with these mistakes as freely as Wales did, and so these errors need to be addressed by Erasmus if Kolisi is going to lift the Webb Ellis Cup.

However, the biggest point on South Africa’s side is the history at the World Cup. Firstly, South Africa has never lost a World Cup final, winning both of the two finals they have been in, twelve years apart. Now twelve years since their last final, they find themselves back in the big show.

Secondly, South Africa have won three out of the four matches against England in World Cups, the most recent of these being the last time either team made it to the final.

Lastly, history states that South Africa has never lost a playoff match against a northern hemisphere team. In quarter- and semi-finals, South Africa has only lost to either Australia or New Zealand.

Despite the history, this match will not be easy, and England will be heading into the final as the firm favourites. Erasmus will need to adapt his game plan to exploit the English weaknesses, and shore up his side’s own weaknesses before Saturday’s titanic battle.

Previous ArticleAnother Counselor
Next Article Art shows us how to love each other, Ace