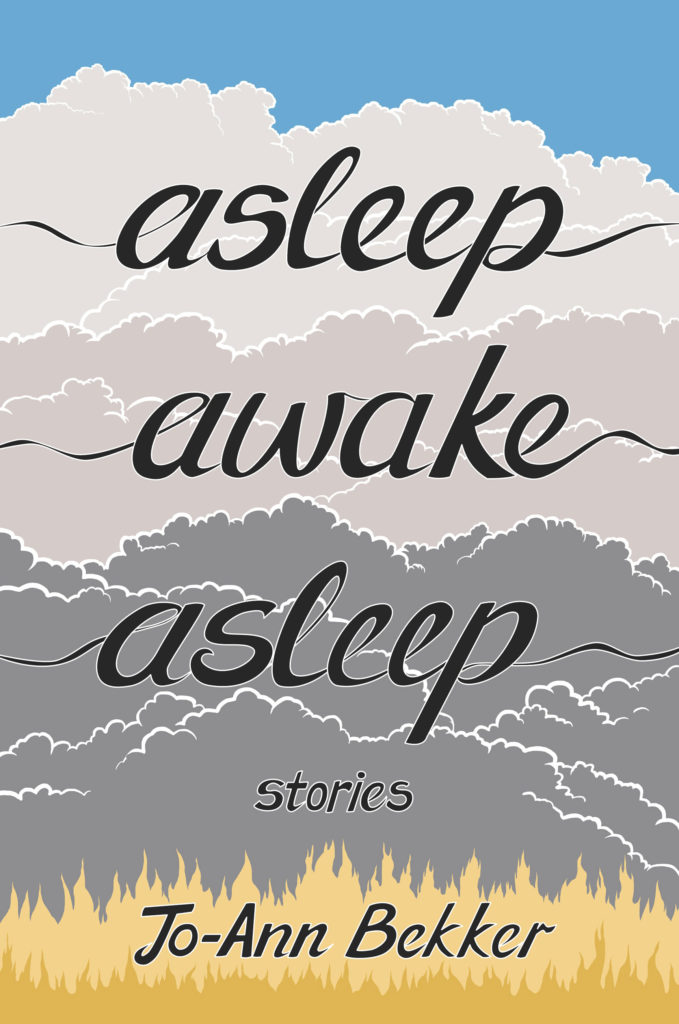 Before digital cameras deluged us with thousands of images, there were slides: small squares of film mounted in a cardboard frame and loaded into a container, each slide in its own slot. As each image passed before the light of a projector, it sprang into glowing life on a screen. Instantly we were delivered to a moment, a place, an atmosphere – a beam of light that behaved like reality. Jo-Ann Bekker’s stories are like that.

Quickly and suddenly – some stories in asleep awake asleep are only half a page long – Bekker plunges her readers without ceremony into uneasy worlds. Their vivid reality, being so familiar, is reassuring but the lives being lived there are not.

The first signal of uneasiness is on the hand-drawn cover. There are clouds, the lettering is dreamy, the sub-title declares stories. But beware: these are not the bedtime variety. The sliver of blue sky above hosts clouds that billow darker and darker down the page. Or is that a mountain range deep in shadow? And the title: it is untethered. Loose ribbons either side of the words summon the transitory nature of a dream state. Asleep/awake… what is the difference actually?

Along the bottom edge of the cover is a jagged band of orange jarring with the dreamy blues and greys above it. Only once you’ve read to the end of the final story in this unsettling collection will you wake from the dream Bekker weaves.

In the saturated light of her photo-realism, we see the rich and messy beauty of lives lived in a troubled and troubling land. And although she is careful to remind us that we are reading fiction, the reader cannot overlook the biographical fact that these stories were written by a former newspaper reporter, that journalism also refers to its news as “stories”, that this collection is prefaced with a telling quote from Ivan Vladislaviç, the South African writer who dances fact and non-fact so sinuously on the head of his literary pin. “All fiction is the factual refracted,” he says, meaning in this case, “Abandon trust, all ye who believe literary genres do what they say”.

One after another, the stories of asleep awake asleep raise more questions than they are prepared to answer, an approach most alive in ‘The Good Housekeeping Magazine Quiz’. This story shifts and slides entertainingly and alarmingly between amusing observation and clinical recognition of a home truth.

Bekker’s spare blade slices her narrative world into impeccably formed morsels that nevertheless stick in the craw. She excels at mounting tension, intimating through precisely reported detail that something sinister is coiling between her lines. Then, just before the last full stop, she unleashes a Five Point Palm Exploding Heart blow. In particular, ‘Game farm’ and ‘A garden full’ robbed me of my breath.

Bekker weaves the rough flax of reporter’s days/nights into the silk of human life. But it’s a raw silk she makes, robust and flexible and supple, and burred with the slub of human nature.