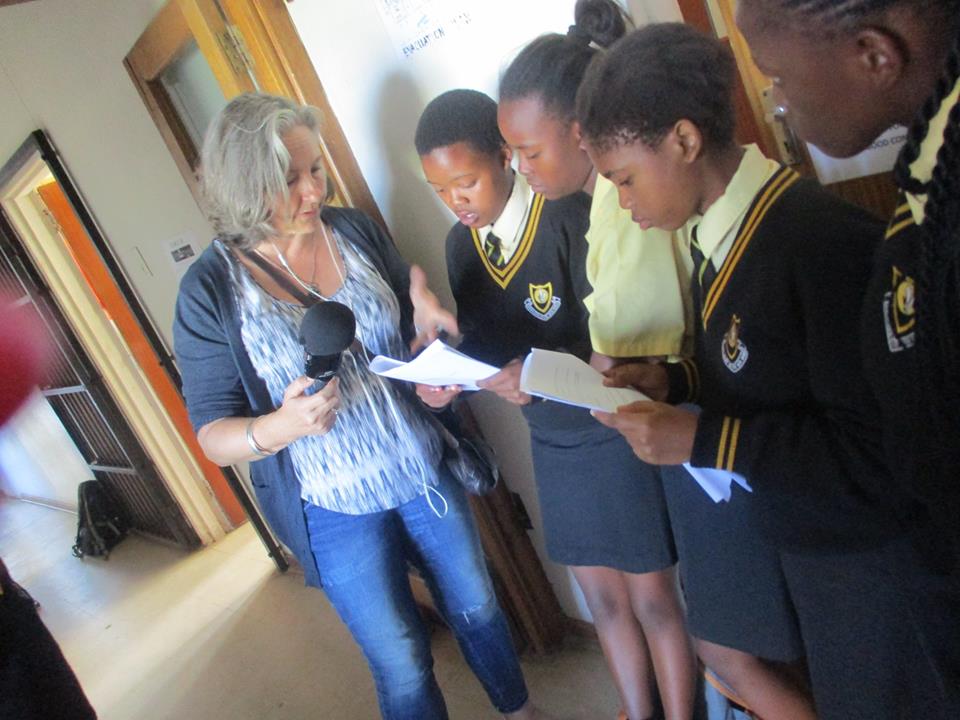 She heard someone come in, come closer, a long shadow appearing on the wall next to her. Hurry up, she thought desperately to herself. I just want to get out of here.
She saw an arm push her door open wider. And then she saw who it was. Dumile. The Matric boy who they were all afraid of. He was in fights at the weekend, had scars to prove it. He saw her behind the half-open door. “Hey, look what I’ve found. A girl in the boys’ toilet!”

The learners’ gasps fill the room. The anticipation of what is to happen next has the learners sitting up and focusing on what they are hearing. Occasional nudges and giggles are exchanged as they hear their peer’s voices through the speakers. A year’s worth of hard work has culminated to this day, and the pride is evident on their faces.

I am attending a listening session hosted by the Upstart Youth Development Programme for their first-ever audio drama.

One of these programmes is a radio series in which the Upstarters run a radio show focused on human rights every Saturday from 9 am to 12 noon on both Radio Grahamstown and Rhodes Music Radio (RMR).

In partnership with a radio professional and Rhodes School of Journalism lecturers and students, the Upstarters completed an audio drama, which has been aired on RMR and Radio Grahamstown.

The popularity of audiobooks is on the rise all around the world. This is mainly because of the convenience of being able to listen to stories wherever and whenever one wants. Even though the growth has been gradual in South Africa, there are strides being made in engaging learners in entertainment and education that doesn’t involve screens.

For preschool and primary school learners, the Nal’iBali campaign has been providing short stories and audio stories in newspapers and online in the 11 official languages since 2012.

Upstart has followed a similar template with the format of their audio-drama, with an Upstart volunteer, Asikelelwe Pezisa, narrating the drama, and some of the Upstarters contributing to the dialogue.

The audio drama, titled The Right Thing to Do is based on a short story written by Fundza Literacy Trust director, Dorothy Dyer. It was recorded in audiobook format with the addition of some of the learners’ voices as characters in the drama. The story is part of a series specially written for young South Africans to educate learners and start conversations around human rights. The stories are multilingual and aimed at making human rights come alive for learners from all walks of life across the country in a way that they can relate to.

Pezisa explained how it began, “Even though they were learning communication skills, we wanted to include literacy skills to help them in their academic careers.”

The learners would engage with the stories on air: “We tried to help them review the stories by asking them questions similar to ones they would be asked in schools. For example, who are the main characters? What conflicts do they face? We did this with the hope that it could potentially help them improve their English marks.”

Pezisa noted that the benefits were not only in relation to their academics but were also evident in the growth of their relationships with each other. “We got to know the Upstarters better because we would see how they related to the different topics in the books.”

The Right Thing to Do was produced and directed by Jayne Morgan, who runs Podcart, one of the country’s foremost podcasting companies. Morgan explained, “We tried to make it sound more natural by mixing isiXhosa and English. We recorded in Nombulelo to capture real sounds and real people.”

She described how creating the drama was a collaborative effort that was made possible by the learners and volunteers: “Even though we did not have huge amounts of resources, we did have people who were willing try and see what we could make of the story.”

The audio dramas have been introduced to the show in a similar way. In the pilot airing, the 30-minute radio drama was divided into 10-minute segments which were followed by on-air discussion. “We would like to air it more on the radio stations and have it spread to schools in and around Makhanda.”