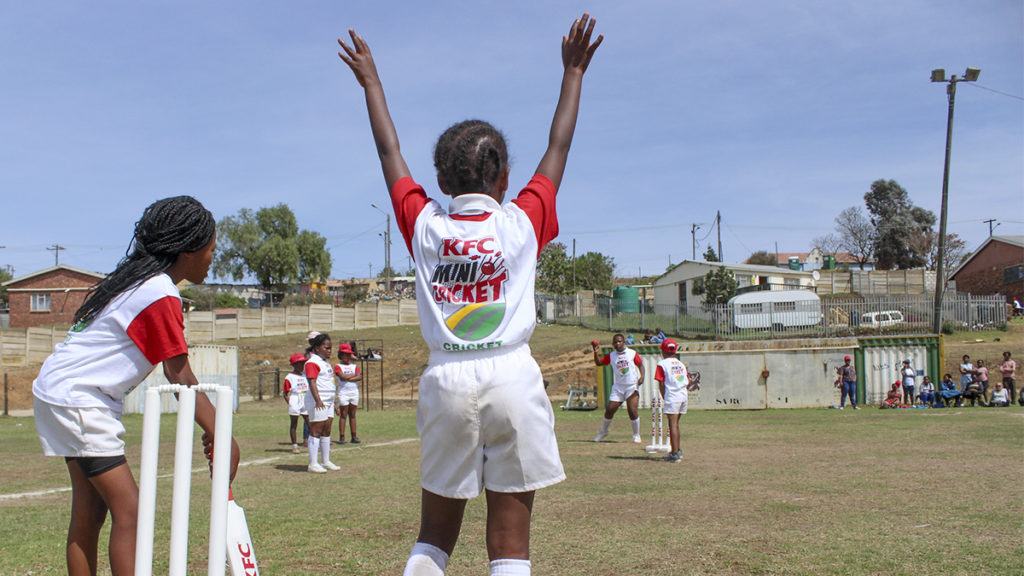 'We love it!' - girls celebrate a wicket taken at the KFC Mini Cricket Festival at the Oval, Makhanda, Saturday 13 October 2019. Photo: Sue Maclennan

More than 100 Makhanda primary school children from five local schools gathered at the Oval last Saturday for a morning of sporting fun and friendship at the KFC Mini Cricket Festival. Laughter, lots of energy and sheer focus made it a morning to remember for the young cricketers, coaches, teachers and enthusiastic parents from St Mary’s, GHT Primary, Oatlands Primary, Ntaba Maria, Good Shepherd and CM Vellem.

Penny Keulder, representing Grahamstown Primary School at the event, said it was a great opportunity for children from different schools to get together.

“It’s a chance for them to get to know each other and just enjoy themselves while learning some skills,” Keulder said.

Gugu Ndulama, KFC Mini Cricket co-ordinator for the Eastern Cape, was impressed at the turnout and the enthusiasm children and adults showed.

“Being here today means a lot – to see everyone here in Grahamstown that’s come out to support the day – parents, teachers, coaches. It’s a wonderful thing because the programme has been going, but this is the first year there has been such a revival of interest. Other sports tend to have taken over.

“The purpose of the regional festivals is to get a larger group of mini cricketers together in their regions,” Ndulama said. “The KFC Mini Cricket programme brings youngsters from diverse backgrounds together to introduce them to the wonderful game of cricket – but also to allow them to play and have fun. There are talent spotters at the festivals to ensure that children who are playing excellent cricket are brought into the development hubs.

“It’s amazing for us to be here again today and to see such a huge turnout – all the kids, but also the parents supporting their kids,” Ndulama said. “It’s wonderful and we hope this is the start of many more years of mini cricket because there’s a lot of talent here – we’ve seen some exceptional cricket.

“Hats off to the coaches who are motivating so many girls to get involved in the game,” Ndulama said. “Under-19 girls and Women’s Provincial Head Coach, Siya Nkosana has been here and he’s been impressed. I think he’s probably taken some names down, and he’s probably going to come back here to work on the talent he’s seen – especially among the girls.”

A feel for the game

Leon Coetzee wears two caps – one as Grahamstown Primary’s principal and the other as chairperson of the Grahamstown Cricket Board and Grocott’s Mail asked him to explain the significance of the format.

“Mini cricket is a very important method of introducing the game to kids,” Coetzee said. “It gives both boys and girls the opportunity to get a feel for the game and if the basic coaching is done correctly, it lays down a firm foundation for future participation in the game.”

What make the mini-format so interesting, Coetzee said, is that every team member gets an opportunity to bat and bowl.

“Once they master mini cricket the transition into hard ball cricket is so much easier,” Coetzee said. “You get a feel for the game and is able to understand a few basic cricket terms.”

The best thing about mini cricket, he said, was that it could be played on any open piece of land.

“All you need is a bat, a ball and set of stumps.”

“Cricket South Africa has done well with this programme,” Coetzee said. “It was the start of so many  cricketers’ careers.

“Introducing kids to the game at this level helps in the long run to motivate them to continue playing at schools and at club level. We need cricketers to continue to feed local clubs as they grow older. That is why festivals like these should not be once off, but regular.”

The KFC Mini Cricket programme is a year-round programme of Cricket South Africa and run by the provincial cricket unions across all nine provinces. The programme provides training, support and kit to the volunteer coaches across the country so that the programme can run year round.

“KFC Mini‐ Cricket is the largest grassroots development sports programme in South Africa and is also an essential building block for learning cricketing basics and entrenching a love for the game,” Marketing and Business Intelligence Manager for KFC, Aimee Slabbert said.

“KFC has sponsored KFC Mini‐Cricket since 2010 and in the 2012/13 cricket season KFC became the title sponsor of the KFC T20 Internationals,” Slabbert said.

The regional festivals happen once a year, while there are many smaller fixtures and weekly matches arranged by the Mini Cricket coaches in the region.

The main event on the regions calendar, is the Provincial Festival, which takes place at Muir College in Uitenhage this year on the 26th of October and which will see over 1000 cricketers from the Eastern Cape come together to play and have fun.

KFC has been a sponsor of the KFC Mini-Cricket programme since 2010.

“It’s one of the largest running development programmes in the world,” said Slabbert.