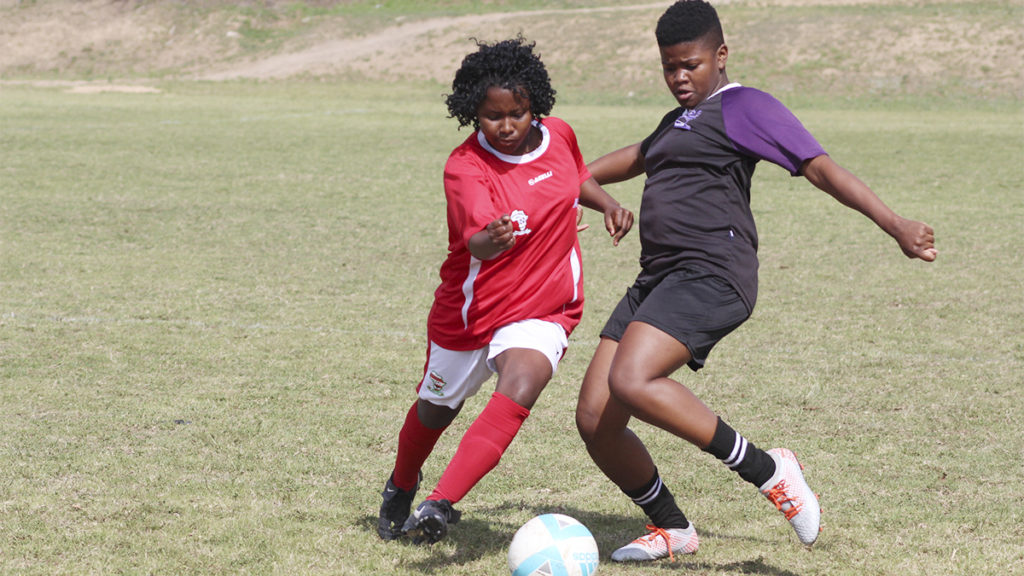 African Connection's Nomveliso Zenani tussles for the ball with Zizo Balintulo of Rhodes during their derby on Sunday 13 October 2019 at King Field. Photo: Sue Maclennan

By CHRIS TOTOBELA
Rhodes University hosted African Connection at King Field in a local derby on Sunday afternoon.The game started slowly. It picked up as both teams sought an early advantage – but it was the visitors who threatened the hosts with the first real chance of the game. Nwabisa Jafta broke clear wide on the right and tried to curl the ball into the far corner, but failed to hit the target, with Amanda Gumede in Rhodes’s goal well beaten. Rhodes came up with some nice build-ups but could not make use of the chances they created.

Gumede was called into action many times and made some brilliant saves to deny Connection.

Both teams failed to score in the first half. The visitors started to control the midfield in the second half and had some neat passes trying to break the Rhodes wall. Goodness Maumo nearly opened the scoring after a great corner kick nearly found the net – but the keeper punched the ball away.

Connection launched their own attack, building from the back. They caught the Rhodes defence napping when Angy Jack dribbled past their defenders, only to be brought down by Amanda Gumede in goals – leaving the referee with no chance but to point to the spot. Nwabisa “Maradona” Jafta calmly slotted the ball into the net to open the scoring.

Rhodes pushed more bodies forward in search of an equaliser but were caught with a quick counter attack that found Siphosethu Dyantyi unmarked. She fired a rocket past the keeper, who could only watch as the ball flew over her head into the back of the net.

Connection piled more pressure, creating more chances, but still failed to add to their two goals. The game ended with Connection beating Rhodes by two unanswered goals. It was a brilliant performance from Amanda Gumede, who played her heart out and made some brave saves as she found herself one on one with Connection’s strikers, but came out on top on numerous occasions.

The goals she conceded were difficult, as she was badly exposed by her defence in the first goal and was left with no option but to foul the striker. The second one could have beaten any goalkeeper any day, as it was a top-class strike – but she really put up a player of the match performance.