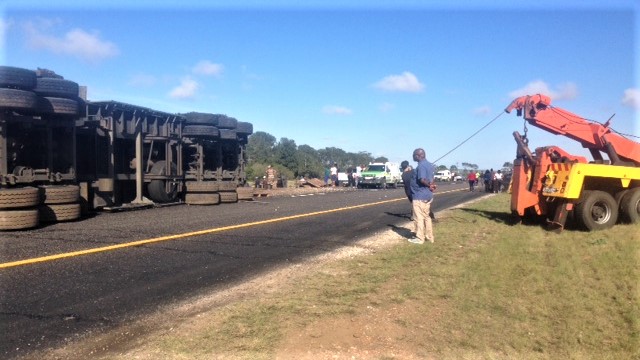 A man looks at an overturned beer truck on the N2 outside Makhanda early Sunday 13 October. Photo supplied

News spread quickly on Sunday morning when a beer truck jacknifed on the N2  10km outside Grahamstown and lost its load early on Sunday 13 October. According to witnesses, Makhanda drinking establishment owners and residents were soon at the scene alongside local farmdwellers, clearing the load from the road and removing armfuls of bottles.

“On 2019-10-13 at about 04.16am a truck carrying alcohol from South African Breweries was travelling from PE to Butterworth when about 10km on the N2 Grahamstown to Peddie/King William’s Town route the driver lost control and the 15-metre superlink trailer at the back overturned and the load of alcohol fell out on to the road,” Govender said.

“Passing motorists stopped and started to loot from the scene,” Govender said. “SAPS members from stations within the cluster as well as Provincial traffic and emergency services were at the scene. No injuries were reported.”

No criminal case had been opened for investigation, Govender said; however, an accident report would be registered.

One person who arrived at the scene soon after the incident said there were untagged and unbranded stray cattle on that section of the freeway and that it appeared the driver had been trying to avoid them. If the cattle caused the accident, it would be the second time in two years, in the 20km stretch of the N2 passing Makhanda, that a large truck has left the road trying to avoid stray cattle.

Two years and a month previously, on 13 September 2017, Grocott’s Mail reported on a truck that crashed down a steep embankment on to farmland below, where the N2 crosses the Belmont Valley road.

Grocott’s Mail sent questions to both Makana Municipality and the South African National Roads Agency as to whose responsibility it is to ensure the national road is free of stray animals. Neither had responded by the time of publishing.

*UPDATE 17 October at 4.30pm – SANRAL RESPONDS AS FOLLOWS:
The owner of the livestock is responsible for the safe-keeping of his/her animals. To keep the animals away from the national road, is the duty of the owner of the animals. While the Roads Authority may erect fencing after the construction of the road, the Roads Authority is not responsible for the theft or vandalism of the fence. Where the fencing has been compromised by criminal acts like theft or vandalism, the owner shall protect or keep his/her animals away from the national road. The Roads Authority only attends to breaches of the fence as a result of an accident.

It is also common cause that herds of cattle are steered to grazing land across the National Road in the vicinity of Grahamstown. While this poses a risk to motorists; there is sufficient time for motorists to stick to the posted speed limit as sight distances are adequate. In this instance, the circumstances that led to the accident are unknown but what SANRAL can state categorically is that it is not the responsibility of the Roads Authority to keep animals away from the National Road.