The multilingual storytellers are at it again! 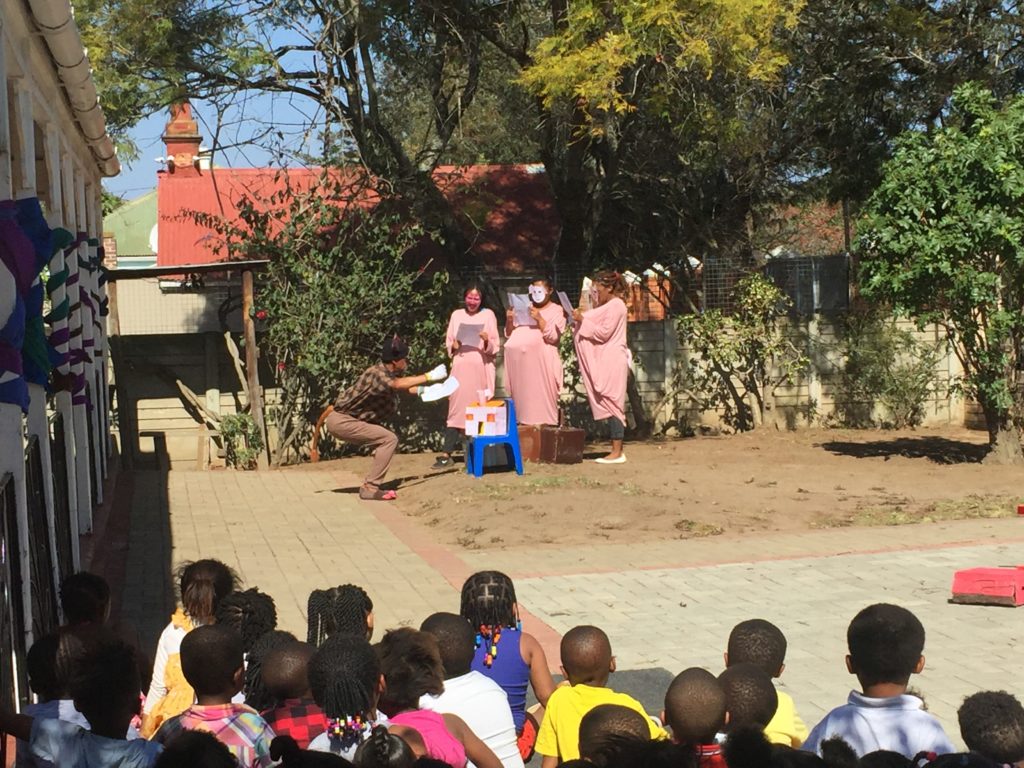 It was a morning of pure delight for 60 preschool learners who gathered outside the Lebone Centre recently for an extended edition of the Multilingual Storytelling Programme.

Cathy Gush, Lebone’s Literacy Programme co-ordinator, kicked-off the event with a warm welcome and a mini story-telling session between her and the learners. Gush’s book of choice, titled “SHHHHH!” by Sam Wilson, Alex Latimer, and Anita van der Merwe, was a real crowd pleaser and set the scene for the rest of the morning.

The Multilingual Storytelling Programme, established in 2018, recruits story-tellers from the surrounding community who dress-up and perform age-appropriate stories to perform for children in English, Afrikaans, and IsiXhosa, in the Sun City and Hooggenoeg areas of Makhanda. The programme is coordinated by Cherise Sickle, ECD coordinator at the Lebone Centre, and targets young children who are not enrolled in formal preschools.

Sickle explains that the aim of this programme is to “expose learners to the magical, mystical world of stories” and to encourage reading for meaning.

Recently, the Lebone Centre extended their version of this programme to their own Little Red Dragon preschool and two other preschools from the local community, as a unique way of celebrating Literacy Month at the Centre. The story for the day was The Three Little Pigs, performed by six of the Centre’s trained storytellers: Anton Whitbooi, Lewis Blou, Anthea Davis, Deberonia Du Plessis, Kaylynne Rushin and Maralize de Lange.

“I am so excited to make a difference in children’s lives,” says Witbooi who played the Big Bad Wolf.

The children waited with much anticipation and excitement as the chubby little pigs and wolf piled out onto the stage for their performance. Soon after, the atmosphere was filled huffing and puffing and the echoing sound of laughing children who happily cheered on the third little pig for building such a strong house.

Once the storytelling session had come to an end, the children were given the opportunity to interact with the storytellers and get their photos taken with their favourite character from the story. Each child also received two beautifully designed, South African-illustrated books from Book Dash, titled ‘Shhh’ and ‘Vuyo’, to take away with them, introducing them to new vocabulary and encouraging them to interact with books at home.