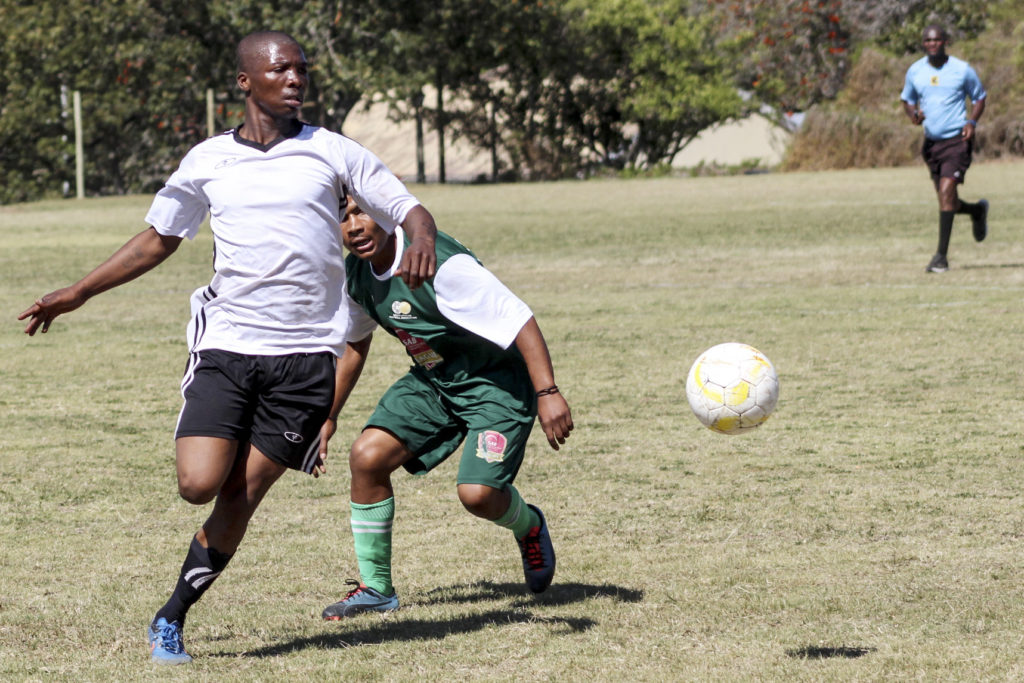 Silindokuhle Bobani of City Pirates cutting off one of many Pillars' attacks in their SAB league clash on Saturday 5 October. Photo: Sue Maclennan

All roads led to Rhodes’s King Field last Saturday where the SAB league regional league kicked off the season with a double header. First up was the local derby with Makana Pillars locking horns with City Pirates in a closely contested game. Both teams seemed very tired towards the end of the game. That’s always the case at the beginning of the season.

The teams went home with one point apiece as the game ended in a two-all draw.

In the second game, Maru hosted Young Pirates from Port Alfred. The game started with both teams weighing each other up in the first few minutes of the game – but the home side settled very quickly. The visitors struggled to get going and hardly put three or four passes together.

Maru started stringing together some neat and effective passes while putting Pirates’s defence under pressure and were immediately rewarded when Sandile Mali pounced on a loose ball that the visitors’ defence failed to deal with. Mali steered the ball with his head into the back of the net, giving the keeper no chance.

Maru kept pilling the pressure but missed a number of glorious opportunities to extend their lead. They finally managed to increase their lead after a well placed cross found Sandile Mali in a good position. He easily passed the ball to the back of the net to give the home side a comfortable two-goal lead. The home side took their lead to the halftime break.

Pirates tried to redeem themselves in the second half, but did not really threaten Maru’s goal mouth. Instead, it was the home side that looked more dangerous but always stumbled in the final third of the pitch. Maru made some substitutions, which paid off as Libona Nondlwana came from the bench to put the final nail in Pirates’ coffin after another delightful cross from the left found him unmarked. He tapped the ball into goal from a very close range.

The score could have been worse had the home side made use of the many chances they created. Pirates were relieved to hear the final whistle bringing to an end this one-sided game. It was a good start for our local sides, who are hoping to improve on their last season’s performance.