An indescribable joy – the gift of receiving a book 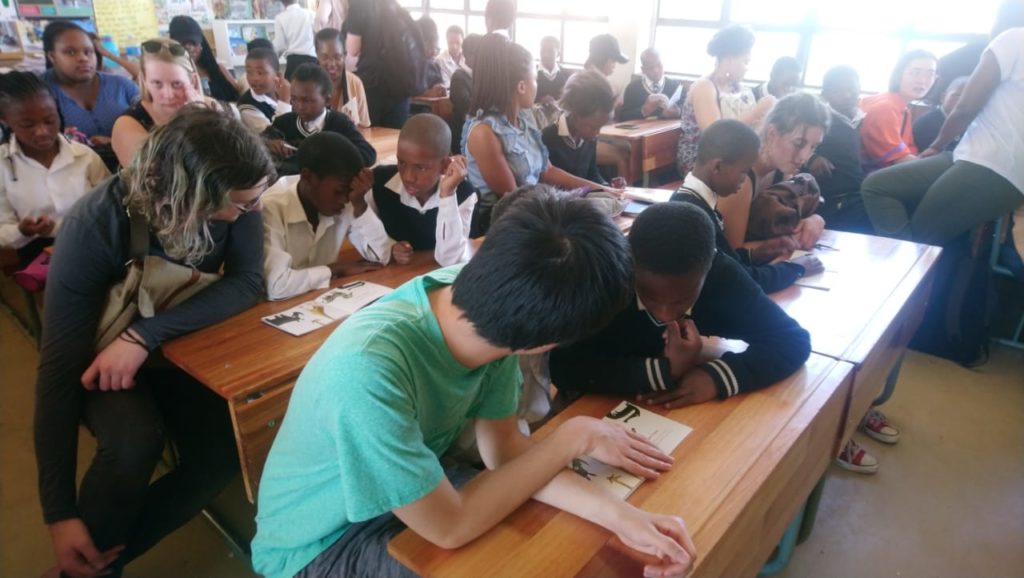 Elation filled the classroom recently, as 82 learners at Samuel Ntsiko Public School were gifted with storybooks to celebrate International Literacy Day. The books were generously donated to the learners by Book Dash and the Lebone Centre, and distributed by Rhodes University Linguistics students.

The Rhodes University students have been working side by side with the Grade 5 learners in Samuel Nstiko for just over eight weeks now, as part of the Linguistics and Community service-learning course. This is a collaborative initiative aimed at providing learners with opportunities for rich oral interaction as well as establishing a reading culture amongst the learners in an effort at strengthening literacy.

It was a privilege to be part of the book handover, sharing in the delight when the learners realized the books were theirs to keep.

Once the initial chaotic excitement had settled, names were written on the front page with a careful pride only a child could accomplish. The classroom was abuzz with enthusiasm as fingers became acquainted with the brand-new print, with every flip of a page the story developed and excitement grew.

The stories were printed in isiXhosa and learners were encouraged to translate the text into English in an attempt to both respect the children’s linguistic identity and enhance their second language literacy. This multilingual approach has been a key principle in our interactions with learners at Samuel Ntsiko. With guidance and support from student teachers, we managed to end the session having accomplished vibrantly animated storytelling in both isiXhosa and English.

A highlight of the day was the sheer appreciation learners felt towards the books, which were received with unprecedented wonder and joy. To have, to hold, to own a book – the ultimate gift of knowledge. Sithi enkosi, Book Dash, wenze kakuhle.