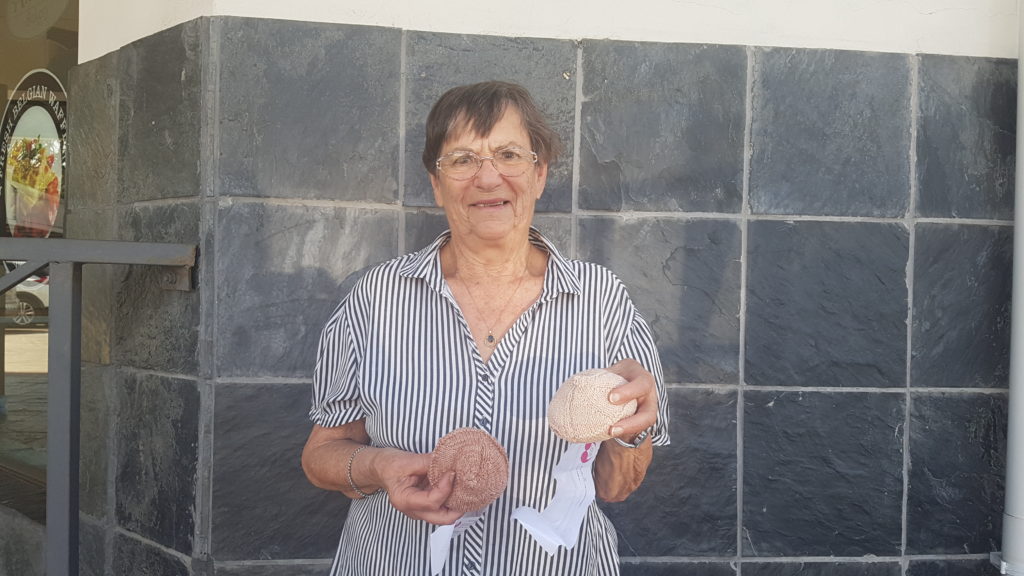 Shirley Willows with the knitted knockers - hand-made "bra fillers" for women who have had a mastectomy. Photo: Gemma Ritchie

After a severe surgery, scar tissue and the surrounding area is often sore and sensitive to pressure. Certain surgeries require ingenious solutions to prevent discomfort during the healing process. One such solution is being made right here in Makhanda.

It is heart-shaped, colourful and in some instances can be tied around your shoulder. It is mastectomy cushion designed to keep pressure off healing scars after a mastectomy operation.

Companies can charge anything from R200 to R600 for mastectomy cushions, and because of the high price, some sewing groups have begun making the cushions to donate to women and men who need them. One of the groups is the Koonap Ladies’ Group, named after the Koonap River where the group began meeting in 1953.

Vice-president of the Koonap group, and a member since 1968, Shirley Willows said the sewing group was founded by farmers’ wives and have made everything from blankets, jerseys and beanies for the old age home, hospice and the Makhanda-based non-profit Raphael Centre to mastectomy cushions and knitted knockers. They fund their projects by providing meals at the monthly stock fair held in the Industrial Area in Makhanda (Grahamstown).

The mastectomy cushion was an idea introduced to Makhanda by resident Judith Reynolds who received a cushion from her friend in Britain after her mastectomy in 2016.

The cushion provided some much-needed support for Reynolds who introduced the idea to Willows’s sewing group through her daughter.

“I used it at first to help me sit comfortably by keeping my arm away from the scar and keeping me propped away from the couch or pillow I was leaning against,” said Reynolds. “It made it more comfortable for me to sleep as my body was healing and getting used to the unevenness of only having one breast.” “The cushions help patients who have had their axillary lymph nodes dissected out,” said Dr Linda Whitelock-Jones, a surgeon based in Port Elizabeth.

According to Whitelock-Jones, the procedure “causes quite a bit of pain, numbness and fluid build-up”.

The cushions provide more support than a “plain square or round cushion,” said Reynolds. Shaped like a heart, most of the cushions are made with donated fabric and the Koonap group have donated many of the cushions to Whitelock-Jones’s private practice and Livingstone Hospital in Port Elizabeth.

The sewing group have begun working on the knitted knockers as a more comfortable filler for women’s bras. After the operation, some women receive a beanbag-type filler for their bra.

Willows’s sister, who had the operation, gave Willows the bean bag to feel. “It was heavy,” she said. “No wonder my sister complained of shoulder pain.”

Willows said the sewing group found the idea through a magazine talking about the Australian design for bra fillers – knitted knockers.

The Koonap sewing group plan on using mohair to make more knitted knockers – and they hope to make something a little bigger than the A-cup of the original design.

If you know someone who may need a mastectomy cushion contact Reynolds at judesreynolds@yahoo.co.uk.