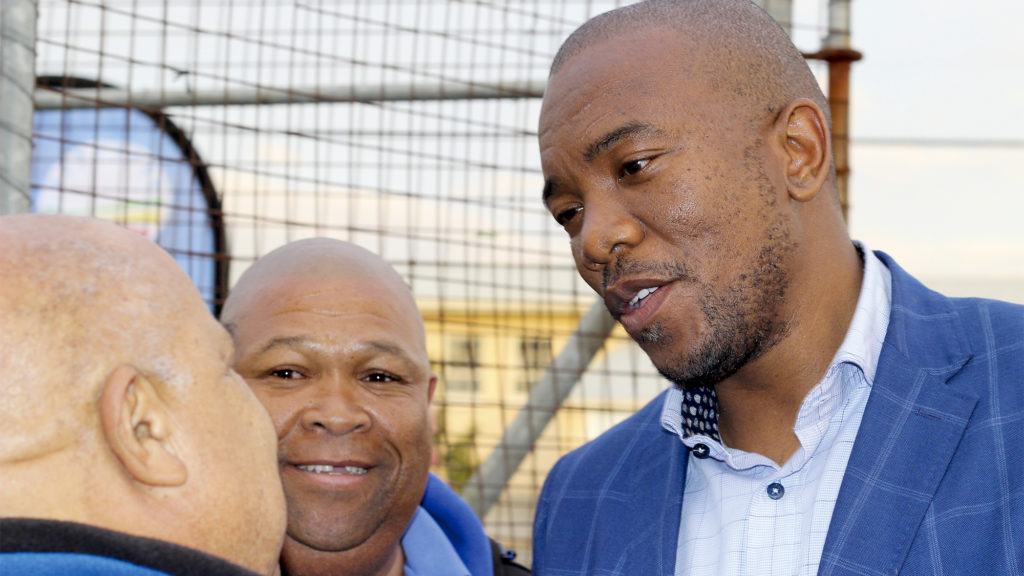 By KATHRYN CLEARY AND STEVEN LANG

At his first stop, Alexandria, Maimane was joined by Shadow MEC for Health, Jane Cowley and Frontier Constituency Leader, Kevin Mileham on an oversight inspection of Wentzel Park Clinic, which serves up to 200 people a week, with one visiting doctor. Staff at the tiny facility told Cowley their biggest issue was space: the waiting area could hardly hold 10 people.

Cowley told Maimane about the Eastern Cape Department of Health’s failures, with a high number of medico-legal claims and basic service delivery failures. The provincial department had a contingent liability of about R27.5 billion, while the budget was only R24bn, Cowley said, stating that health had been driven to its knees in the province.

“So effectively, you could say the Eastern Cape Department of Health is bankrupt,” said Maimane. If the Eastern Cape can’t pay its bills, where do you expect [citizens]to get healthcare?” Maimane asked, saying, “The MEC for Health in this province is going to be responsible for many more Life Esidimenis.”

Maimane, Cowley and Mileham addressed a supportive audience of around 30 people before rushing off to the next stop, Station Hill in Port Alfred.

There, around 50 supporters sang and danced on Maimane’s arrival. His opening words about the scourge of unemployment in the country were met with cheers. Maimane posed that without the promise of jobs, young people were discouraged from completing school, which led to teenage pregnancy and crime.

In Station Hill, residents told Maimane, there is no high school in the community and a supporter later asked Maimane to investigate what happened to R21 million reportedly set aside for a new high school years ago.

Maimane spoke again about healthcare, stating that DA run clinics were open until 7pm every day of the week. “We don’t tell you when you can get sick,” he said.

He also commented on growing racial divisions (“Anyone that is racist actually hates God!”) and gender-based violence (“We are sick and tired of women in our country walking around and not feeling safe.”)

His joke that if someone needed to hit someone, they should come hit him and not a woman was met with laughter and applause.

His final coastal stop for the day was St Paul’s Anglican Church, where Maimane addressed pensioners and business owners. There, Maimane spoke about expropriation without compensation, calling it “mad”.

“We are the only party that will be able to get land reform right”, he said.

“You can’t even run a clinic and now you want to run all the hospitals?” he said.

Asked why the DA appeared to be losing ground in by-elections – in August, the DA lost the by-election in Makana’s Ward 12 – Maimane attributed this to “bleeding out” to the Freedom Front Plus (FF+), as well as a lack of communication.

“If you want everyone to be happy in an organisation, give them ice cream,” Maimane quipped.

Maimane’s evening in Makhanda started at the Recreation Hall in Albany Road, where more than 150 local residents warmly welcomed him.

He used his skills as a preacher and quickly hit upon issues that he knew were relevant to the crowd – water, crime and potholes. He made it clear that the only way to resolve these and other problems is to vote a DA council into power in Makana. He said he was shocked to see how badly the ANC had run local government in the area.

Now listen to Steven Lang’s interview with Mmusi Maimane during his visit to Makhanda: