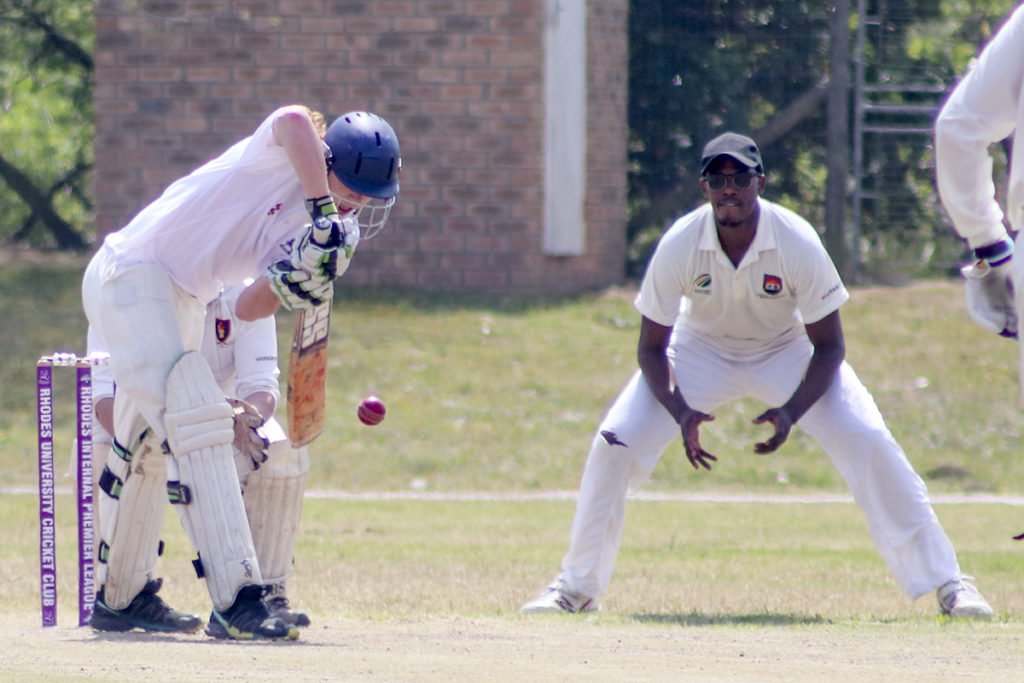 The Rhodes University 1st XI cricket side got off to a perfect start to their Grahamstown Cricket Board’s (GCB) 1st League. Last weekend saw the students record two impressive wins on Saturday and Sunday respectively.

1st League
Rhodes vs Manleys Flats (Saturday)
Rhodes hosted Manley’s Flats at the Prospect Field on Saturday and managed to pull off a fantastic 24-run win. Rhodes batted first and scored a defendable 204 runs (48.4 overs) and managed to bowled Manleys out for 180 (40.1). Ryan Harley (52), captain David Blenkinsop (29) and Matthew Menear stars with the bat for Rhodes.

Rhodes vs Makana Sona (Sunday)
The Rhodes students were at it again the following day when they faced Makana Sona. Makana went in to bat first and were bowled out for a mere 128 in just 24.4 overs. Rhodes bowlers were in fantastic form and made used of the overcast and wet weather conditions. Sean McQuillan was the standout bowler for the home side clinching 3/3 (1.4) he received excellent support from Ryan Harley 2/24 (7), David Blenkinsop 2/35 (5) and Webster 2/20 (5). Young Bavu shown some resilience for Makana with a fine 47 (7×4, 1×6) and veteran Lunga Stamper with 27.
Rhodes batsmen wasted no time as they quickly chased down the total reaching 130/6 (27.2 overs), also earning an all important bonus point win. Captain Blenkinsop smashed a quick fire unbeaten 45* (7×4), while Sean contributed 22.
Khuhlane 3/30 and S Mini 2/49 tried their best for Makana.
Rhodes won by 4 wickets and a bonus point.

“Overall I am very happy with the results this weekend,” said Rhodes Coach and Manager Stephen Pettitt. “There was some good individual performances and to get two wins is the perfect start. I would say there is still a lot to improve on though. We had a few starts and some batsman not converting their chances so lots to work on moving forward as we look to the University Sports South Africa tour at the end of the year but happy with the results.”

Cuylerville 1st vs Port Alfred
Port Alfred all rounder Warren Bowdler, was the star performer with both bat and ball in his side’s narrow defeat to Cuylerville. He smashed a career best 189 runs (20 sixes & 8 fours) with the bat and also claimed 3 wickets for 35 runs in 9 overs. Cuylerville batted first a set up a huge 301 runs. Kyle Handley was the top scorer with a fine 77 while Jamie Renton 64 and Charlie Muir 47 also played some important knocks. Rob Nel supported Bowdler well with the ball with a steady 2/38 (10).
Port Alfred got off to a shaky start losing four quick wickets. But it was Bowdler who came in and dispatched the Cuylerville bowlers all over the park. He almost single-handedly won the game for his side, and he ran out of partners in the end. Cuylerville got a big fright as he almost took the game away from them. Morne Van Wyk did exceptionally well for Cuylerville with his medium swing bowling, claiming 4/46 (10). Veteran spinner Warren Tarr claimed 2/65 (10) and Kyle Handley 2/40 (10). In the end, Cuylerville’s bowlers held their nerve and clinched a narrow 7-run win.